Not only do leaders matter to creating a culture of achievement, they help earn outsize results for investors. Check out the top 25.

When Ford (F -1.98%) was beginning to have serious troubles in late 2006 -- it was bleeding money and losing market share -- the company did something about it: It hired an outsider to take over as CEO. Not only was Alan Mulally not coming from within the company to become CEO, he was in a different industry entirely: He worked in aviation for Boeing.

Some wondered if the decision was a good one at the time, but the intervening six years have made the verdict perfectly clear: He was the right man for the job.

These types of moves -- hiring an outsider -- get a lot of press. The most recent example would be Yahoo!'s decision to hire Marissa Mayer as CEO. Though she has experience working in the industry -- she was employee No. 20 at Google -- she'd never spent a day as a Yahoo! employee before taking over.

Not as common as you might think
Though these instances get lots of coverage from the financial media -- and though from time to time they are excellent moves for certain companies -- they are far less common and effective than you might think. In fact, when examining some of the best CEOs in the world, you discover that many of them took over unceremoniously after working their way up through their organizations for decades.

At the start of 2013, Glassdoor.com -- a website that collects employee sentiment for companies across the world -- came out with a list of the top 50 CEOs for the year. Because the Fool focuses on investing in publicly traded companies, I went through and eliminated any company not traded on an American stock exchange to come up with a top 25 list just for Fool readers.

The list reveals two key distinctions. First, most CEOs have a history at their company that lasts decades and goes far beyond their tenure as chief executive. The average CEO has spent 20 years with his or her company. 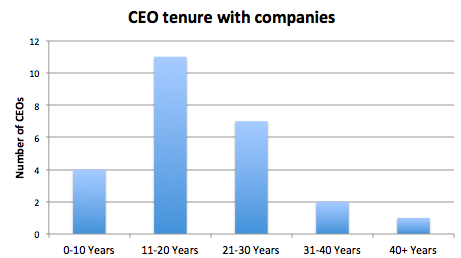 The second big takeaway is that having a top-level CEO matters. Over the past five years, the companies led by these CEOs have far outpaced the S&P 500's return. And when we look at the six CEOs included in the list that also happen to be the founders of their companies, the results are even better. 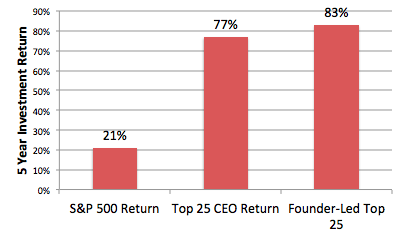 Dig deeper yourself
Over the past two weeks, I've covered each and every one of these CEOs, from No. 25 to No. 1.

Most of the time, the kind of information you can get about a CEO and the culture he/she creates won't show up on a financial statement or press release, but it's every bit as important to the success of a company and -- in turn -- your investment.

Click on any of the links below to dive in and see who this year's top CEOs are, as selected by their employees.