Please ensure Javascript is enabled for purposes of website accessibility
Log In Help Join The Motley Fool
Free Article Join Over 1 Million Premium Members And Get More In-Depth Stock Guidance and Research
By Travis Hoium - Apr 14, 2013 at 8:37AM

Growth in the Bakken shale has made North Dakota the fastest-growing state in the country.

Over the past decade, no state has grown faster than North Dakota. It leads in GDP growth and personal income growth, and it has a wide lead in oil production growth. So how did one of the coldest, flattest, least populated states in the country become an economic hot spot?

The bang that led to a boom
Oil was discovered in western North Dakota in the Bakken formation in 1951, and for a long time there's been a limited amount of drilling in that part of the state. Until recently, the technology didn't yet exist to extract most of the oil trapped between rocks -- shale oil -- at an economical cost.

In the early to mid 2000s, companies such as Halliburton (HAL 0.39%) developed the technology to extract both oil and gas from shale plays economically, unlocking energy plays across the country. One of the largest plays in oil was the Bakken Shale in western North Dakota and eastern Montana, and companies flooded in to pick up as much land as possible. 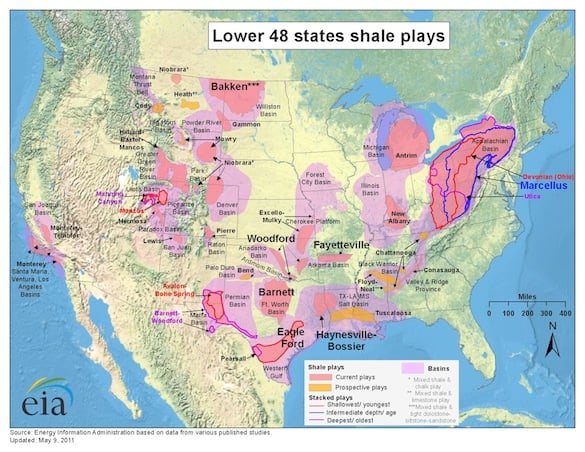 Today, Continental Resources (CLR -2.72%), Whiting Petroleum (WLL), Statoil (EQNR 1.08%), and Kodiak Oil & Gas (NYSE: KOG) have access to nearly 2 million combined acres ,equivalent to 1,280 square miles. They're dotting the plains of western North Dakota with drilling rigs and production wells. All of this drilling has led to massive growth in oil production, which brings economic development and jobs to this once forgotten state. For a visual showing how fast oil production grew, click here to see a 25-year EIA time lapse of energy production in the Bakken.

All of this oil production has been fabulous for the economy and the residents of North Dakota. Over the past decade, North Dakota's GDP has grown at an annual rate of 4.04%, which compares with 0.54% nationally. Only Oregon can compare, with 3.36% growth. Every other state in the country has grown at a compound rate of less than 2% over that time.

More jobs than the prairie can handle
The explosion in GDP growth hasn't been enjoyed just among the oil big wigs: There's been huge growth in personal incomes as well. According to the Bureau of Economic Analysis, since 2005 per capita personal income has grown at a compound rate of 7.25% in North Dakota, which is more than a 50% increase in salary over six years. That compares with just 2.69% in the U.S. and 4.19% in second-place Louisiana, which also benefits from the growth in oil production. Here's a look at the top five states for personal income growth since 2005. 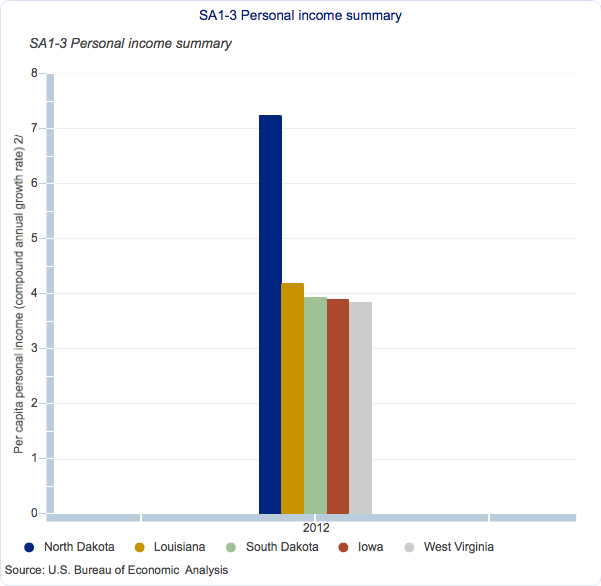 Amazingly, there are 11 counties in North Dakota that have seen per capita personal income grow 11.48% or more per year over that time, nearly doubling salaries. 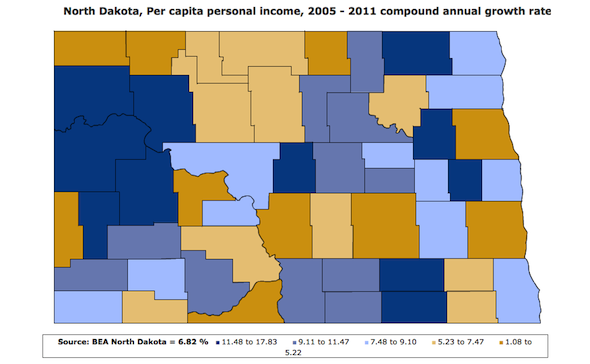 If you're interested in one of these high-paying jobs, you might have to find a home on the prairie, because Fargo, the state's most populous city, sits in the southeastern part of the state, in one of the slowest-growing counties from an income perspective. The jobs, and the money, are out west, where the oil is plentiful.

America's latest hot spot
As long as oil prices remain over $80 per barrel, the drilling boom should continue in North Dakota. The state has a plethora of resources, and explorers are expanding reserves all the time. As technology improves, even more of this oil and natural gas will become economically profitable to extract, keeping the economy of North Dakota red hot.