Please ensure Javascript is enabled for purposes of website accessibility
Log In Help Join The Motley Fool
Free Article Join Over 1 Million Premium Members And Get More In-Depth Stock Guidance and Research
By Justin Loiseau - Apr 15, 2013 at 11:31AM

The best products all share one common characteristic: People want to buy them. Electricity generation is no different, and a new report points to renewed demand for renewables in 2013 and beyond. Let's take a look at where demand's growing – and which dividend stocks are stocking up on supply.

Renewables revival?
A new report (link opens in PDF) from the Energy Information Administration, or EIA, projects a 3.4% increase in renewables consumption for 2013. While hydropower is expected to fall 4%, a 6% jump in wind generation will help boost non-hydropower renewables demand by a whopping 13.3%.

The EIA projects 2014 to push renewables demand and supply even higher. A 14% increase in wind capacity will be the primary driver behind 2014's projected 5.9% renewables growth. 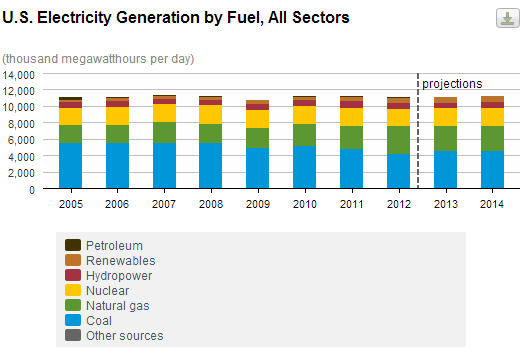 Who's winning with wind?
Utilities have historically been the home of never-ending dividends, but the recent energy shakedown is putting pressure on profits. Several utilities have opted for energy overhauls, and this newest report could mean good news for their renewables investments.

NextEra Energy (NEE -0.76%) is the nation's largest producer of renewable energy. With over 41,000 MW total generation capacity, the utility is the No. 1 generator of both wind and solar power. It added on more wind than any other utility in 2012, and sold off its hydro assets last month to further focus its generation portfolio. Although its 3.3% yield is the smallest of any dividend stock mentioned here, it's also got some of the best growth potential.

Duke Energy (DUK 0.05%) is well on its way to cutting its coal consumption through a mix of natural gas and renewables. The utility has spent $7 billion so far, and expects to dole out an additional $5 billion-$6 billion to retire up to 6,800 MW of inefficient coal plants. The company added on five new wind farms and three solar farms 2012, and just purchased two more solar farms this week for another 100 MW of generation capacity.

Exelon (EXC 0.47%) excels at nuclear, but its renewables portfolio has been rapidly expanding in recent years. The utility currently operates 44 wind farms totaling 1,300 MW of generation capacity, and could add on more with the recent extension of wind's production tax credit. Its newly sustainable 5.8% yield makes it dividend stock dynamite, even as its shares have rocketed in the last three months. 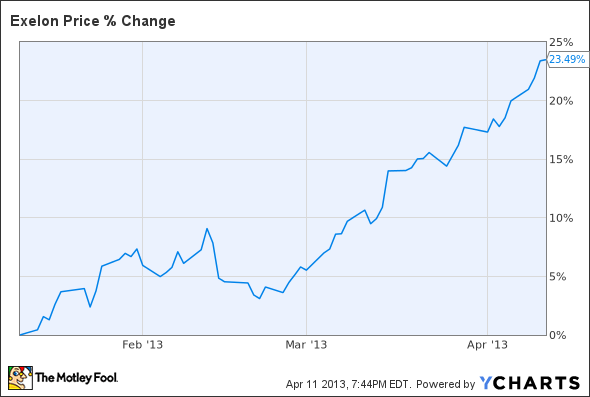 Atlantic Power (AT) is a small player in the renewables game, but it may have more riding on future demand than any other utility. The corporation has hit hard financial times and is looking to renewables and natural gas to keep its dividend stock status. Atlantic added three wind farms to add 150 net MW to its generation portfolio in 2012, and could potentially purchase more as BP (BP -0.26%) sells off its 16 wind farms.

While the getting's good
Renewables are on the rise, and utilities investing in their own energy portfolios could see rocketing revenue in the next few years. But renewables represent just one piece of most utilities' portfolio pies, and recent shifts in coal and gas prices could also propel or punish your dividend stock's profits. Be sure to check out my other article to round out your investment analysis, and make your calculations accordingly.