Last week, the Potential Gas Committee released a new report that estimates the potential natural gas resources available in the U.S. at 2,384 trillion cubic feet, an eye-popping 26% increase over the group's late 2010 calculation. While reduced natural gas prices have led to such projects as the Clean Energy Fuels (CLNE -2.05%) America's Natural Gas Highway and Berkshire Hathaway's (BRK.A -0.20%) BNSF Railway pilot program to test liquefied natural gas (LNG) locomotives, the price of the commodity has also put downward pressure on natural gas stocks in general – Chesapeake Energy (CHKA.Q), for example, is down about 40% over the last two years.

As is the case with most things, the impact on the long-term viability of LNG as a U.S.-based substitute for other energy sources is one of balance. If the right blend of supply and demand can be maintained, natural gas stocks should soar. If supply becomes too plentiful, however, driving down prices too much, companies will have less financial incentive to develop natural gas further. With the explosion of shale-based supply, the impact on natural gas stocks is in its infancy but a critical area for investors to watch.

The report
The group bases its report on how much natural gas it believes is recoverable in the U.S. using only currently available technologies, but ignoring any cost constraints that might act as a disincentive to the actual recovery of the supply. The boom in hydraulic fracturing – more commonly referred to as fracking – is primarily responsible to the increase. Geographically, the Marcellus Shale, stretching from New York across Pennsylvania to Ohio, has been at the center of the supply glut. Both Chesapeake and Range Resources (RRC -0.85%) have large holdings in the area. Range Resources has faced far fewer non-natural-gas setbacks than Chesapeake – specifically, Range did not suffer from the misbehavior of its CEO – and its stock is up nearly 50% over the last two years. The fates of different natural gas stocks have been very company-specific of late.

World supply
One of the major concerns that has been explored by natural gas stocks' shareholders, industry insiders, and politicians alike is the demand for exportation of LNG. There is a significant supply disparity that has led to a price discrepancy of nearly five-to-one for European versus U.S. natural gas. As such, the demand to export a portion of supply is quite high, particularly among companies. U.S. law on this subject is very strict and to date, only Cheniere (LNG -0.47%) has been given permission to export small quantities. This license may be a central reason why among the natural gas stocks discussed, Cheniere is up over 200% in the last two years. 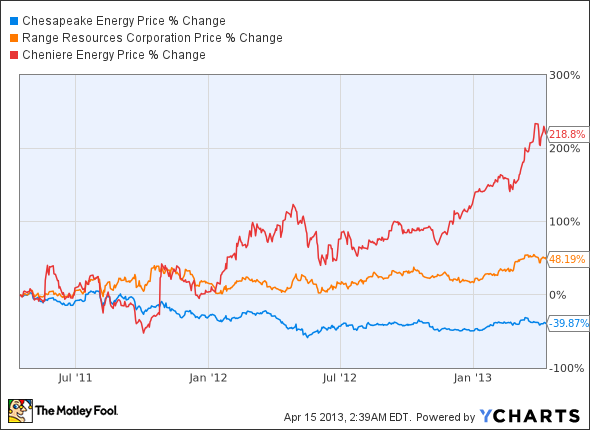 The impact of greater supply
While the short-term pressure on natural gas stocks created by this additional supply may be negative, ultimately, it should be seen as a positive. The knowledge that there is a long-term supply of natural gas means that projects like the one being undertaken by Clean Energy have a chance to take root. The company is attempting to install a series of LNG fueling stations along key trucking roots across the country in an effort to promote using LNG for the transport of more goods. The estimated quantity is roughly 90 times 2012's consumption of natural gas. As more projects like this are implemented, natural gas stocks should continue to be considered strategic long-term investments that belong in your portfolio.