Even with outstanding earnings reported yesterday, Citi is still trading at a discount.

One of the most important things that a bank will report in its earnings release is the current tangible book value (TBV) per share -- its liquidation value divided by the number of outstanding shares. Often, this gives investors a gauge of how the bank is growing, as well as the range of valuation for a piece of the bank.

Yesterday, Citigroup (C -0.87%) released its updated number: $52.35 per share. The bank has been trading at a discount to its TBV for a long time, but yesterday's earnings report was a welcome breath of fresh air for Citi investors. Revenue growth, improvements in international markets, and further reductions of Citi Holdings all highlighted Citi's progress in rebuilding. The bank's stock has gained 3.6% since but is still markedly below the TBV per share reported. What gives?

Let's take a look at why Citi's investors may think it's worth less than TBV, how it stacks up with competitors, and how you should assess the bank going forward.

Sum of its parts
So, if tangible book value per share is the amount of cash each investor would receive should Citi need to be liquidated, it essentially boils down to the value of the bank's asset -- since that would be the source of funds to pay off its liabilities. With the share price at an 11% discount to the reported TBV per share, investors are telling us that the bank's assets are not worth what Citi itself calculates their value to be.

By looking at the components that make up Citi's assets, it gives a bit more insight into the bank than its tangible book value. 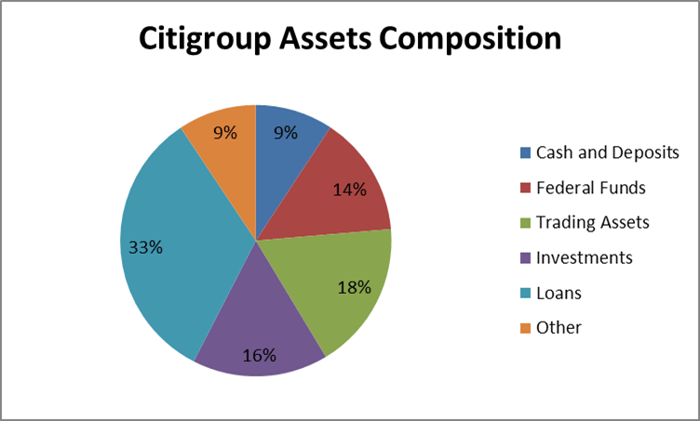 Since Citi operates a large international investment banking arm, a large chunk of its assets are investments that can vary in value. But the biggest culprit causing investors to doubt Citi's valuation may be found in Other. During the financial crisis, Citi lumped all of its non-core assets into an entity it calls Citi Holdings. Since then, the bank has been divesting itself of Holding's assets, with the most recent year bringing the total down another 29%. Though Citi Holdings only makes up 8% of the bank's total assets, there are concerns about how and when Citi will sell the remaining assets.

In the most recent earnings conference call, Citi noted that it does not have any current buyers for the assets it's looking to part with, but that it is confident that when an opportunity arises, the bank will be ready to take action. It was also notable in Citi's report that the drag on earnings created by Citi Holdings is dropping, with a dramatic 27% improvement from last year's comparable quarter. So the combination of non-core assets sitting on the balance sheet PLUS a drag on earnings makes Citi Holdings the likely explanation for Citi's low share price.

You're not alone
Compared to its closet competitors, the remaining three banks of the "Big Four," Citigroup is not alone in trading at a discount.

But since Bank of America hasn't reported its first-quarter earnings yet (it will tomorrow), there is a possibility that Citigroup will become a lone wolf. Through its Project New BAC, Bank of America divested itself of $60 billion in non-core activities, but had no significant impact on the bank's bottom line. This gives B of A a slight advantage over Citi.

Both JPMorgan and Wells Fargo trade at a premium, since both emerged from the financial crisis relatively unscathed. Wells has the biggest advantage, largely because of its traditional banking operations -- leaving it with the most stable balance sheet of the four.

Going forward
Citi Holdings will likely cause Citigroup to continue trading below TBV per share until the bank is able to offload the remaining assets. And unfortunately for investors, there's no sign of when that may happen.

But Holdings should not be the determining factor of whether you invest in Citi. Since the bank has made a lot of progress selling off the assets, it has a proven track record of following up on its operational goals. And with the growth seen in this quarter's earnings, it's clear that Citigroup is well positioned to keep expanding, both in the U.S. and internationally.