Prices at the pump fell for the 7th straight week to a national average of $3.542 per gallon.

At 387.6 million barrels total, the week's supply represents a 0.3% decrease compared to the previous week, when inventories increased by 0.3 million barrels.

For the week ending April 12, crude oil refinery inputs remained relatively steady, down just 40,000 barrels per day (bpd), while crude oil imports fell by 289,000 bpd. Overall inventories remain "well above the upper limit of the average range for this time of year," according to the EIA. 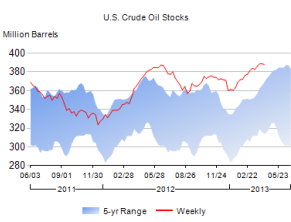 Total motor gasoline inventories dropped 600,000 barrels after jumping up 1.7 million the previous week, although finished gasoline supplies continued to expand. Prices at the pump fell for the seventh straight week to a national average of $3.542 per gallon, $0.066 less than the previous week and $0.38 cheaper than a year ago. 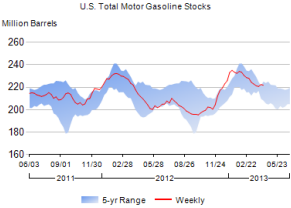 After dropping 200,000 barrels last week, distillate fuel inventories rose 2.4 million barrels. Despite the large increase, supplies remain "in the lower half of the average range for this time of year," according to the EIA. 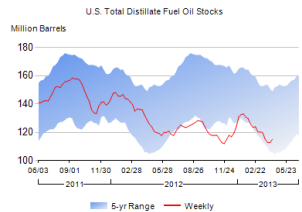