A combination of cultural factors and a solid business history has one Fool analyst thinking the stock isn't as bad as everyone thinks.

For the past 20 months, I've been doing my best to help the world invest better. Every month, I publicly call out a few stocks that I'm considering adding to my Roth IRA. So far, my monthly picks have returned 16%, besting the S&P 500 by 1 percentage point over the same time frame.

Read below to find out why Facebook (META 5.10%) is one of the stocks I'm considering, and be sure to tune in next Tuesday to see if it's the stock that I'll be choosing to buy.

Keeping it simple
I've found that in the past, my best decisions are made when I follow the KISS method (Keep It Simple, Stupid!). With the amazing amount of information out there, it can be difficult to decide what's important and what's just noise. I try my best to narrow down my reasoning, otherwise analysis paralysis is sure to set in.

1. Culture matters.
One of the biggest mantras you'll hear in the business blogosphere these days is "culture trumps strategy." The main point is that you can have the best strategy in the world, but if you don't have a culture where people collaborate, trust, and rely on one another, you won't get anywhere.

I agree 100% (of course, once you have the right culture, you need a good strategy, too!). Every year, Glassdoor releases its Best Places to Work list based on anonymous employee reviews. If we go back to the 2009 list (the earliest available), we see that the 10 highest-rated publicly traded companies performed much better than the market. 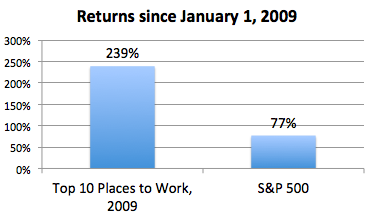 Sources: Glassdoor.com, Google Finance. Does not include dividends.

2. Leadership matters.
When a company is driven by a vision provided by a ground-breaking CEO, there's no way to measure just how important that CEO is to the company. As an example, I've mentioned several times that one reason I'm starting to seriously doubt  my investment in Apple is because of the loss of Steve Jobs.

Going back to Glassdoor, the website also provided a list of its Top-Rated CEOs in 2013. Once again, if we look at the five-year returns for the companies headed by top-rated executives, we see outsize gains --especially if that executive is also a founder. 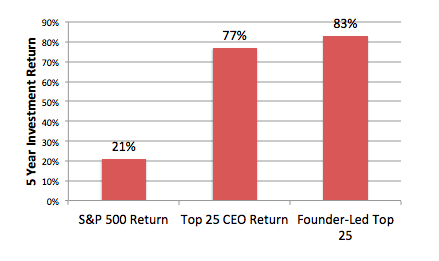 In 2013, Facebook CEO Mark Zuckerberg was rated No. 1. That, plus the fact that he's the founder of the company and has a principled outlook for its future, should engender some love from long-term investors.

3. Multiple futures
This is an idea championed by chief Rule-Breaker and Motley Fool co-founder David Gardner. He likes investing in companies that have "multiple futures." Basically, this means companies that are innovative and nimble enough that they could have their hand in several different industries in the future.

Obviously, creating a social meeting space for its users is the primary function of Facebook. Google (GOOGL 4.16%) has tried to emulate that success with Google+, but the results have been underwhelming, with the average active Google+ user only spending 1% as much time on the site as on Facebook.

That could be just the tip of the iceberg: Facebook has an app store that could rival Google Play and Apple's App store. Recently, I've noticed that I Facebook-message my friends if I need to tell them something, rather than using my Microsoft Outlook or Gmail accounts.

Either way, you get the point: There's no telling where the company could head.

4. Results to impress
I'll be the first to acknowledge that I'm not crazy about a company that relies so heavily on advertising for revenue like Facebook does. The new ads that are popping up in my feed are a little annoying, and I don't think I've ever clicked on a sponsored ad on the right-hand side of my screen.

That said, there's no denying the fact that -- when you factor out stock-based compensation -- Facebook has been able to produce impressive financial metrics. 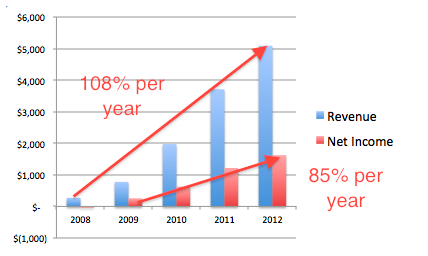