Can this utility electrify your earnings?

American Electric Power (AEP 0.67%) held its annual meeting on Tuesday, and things are looking up for the utility and its investors. With a bigger dividend and decent earnings growth, let's see if this dividend stock has what it takes to pull profits for your portfolio.

Dynamite dividends
The biggest news on the block is AEP's new and improved dividend. The utility announced that it will increase its quarterly distribution to $0.49 per share, a 4.3% increase over its previous dividend. "We understand how important strong dividends are to an investor's portfolio and are grateful for the ongoing focus and diligence of our employees, which has allowed us to maintain our financial strength and reward our investors with solid returns for 412 consecutive quarters," said President and CEO Nicholas Akins in a statement.

Although American Electric has distributed a dividend every quarter since 1910, it's not the only utility with a strong payout history. Southern Company (SO 0.11%) announced last week that it is raising its dividend for the 12th straight year. Its upcoming distribution will be Southern's 262nd consecutive dividend-dealing quarter.

Over the past five years, both dividend stocks' shares and dividends have headed higher, although Southern's price gains are almost double that of AEP's. 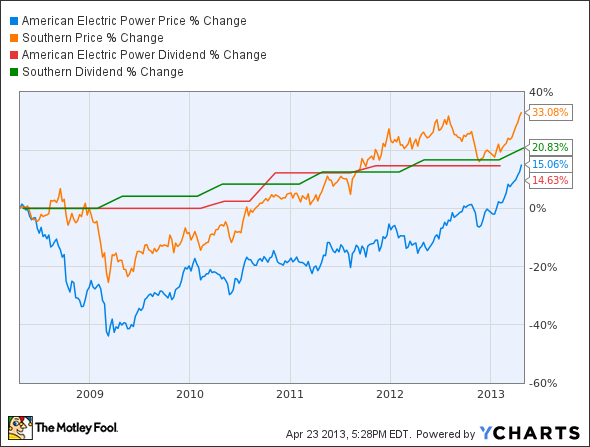 But not all dividend hikes are good – and likewise, not all dividend drops are bad. Exelon (EXC -0.42%) announced in February that its Q2 dividend will receive a 40% haircut to help balance its books and free up finances for future growth.

A closer look at each utility's cash dividend payout ratio over the past five years puts each payout in perspective. 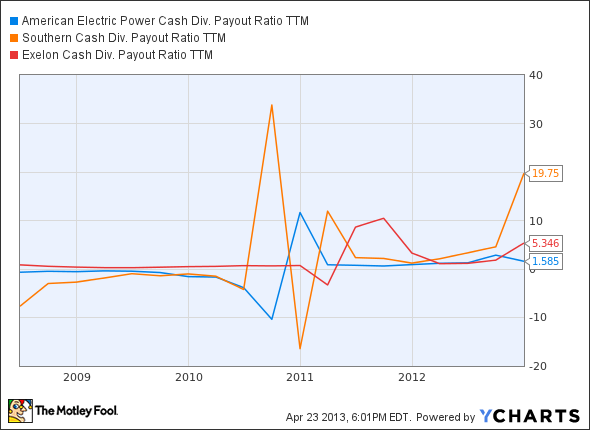 Southern seems to be in stormy waters, while American remains in line as Exelon sets itself up for smaller payout this coming quarter.

Regulation versus generation
American Electric is still reeling from its recent regulatory disaster in Ohio. After the utility's rate approval was signed, sealed, and delivered in December 2011, the state decided to deregulate its markets in 2015 and, in the interim, give access to FirstEnergy (FE 0.83%) to offer long-term contracts to all its customers.

AEP is working hard to offset Ohio's deregulation with its other operations, and expects that 86% of its assets will remain regulated by the time the Buckeye State opens up its markets.

American Electric pulls 66% of its power from coal, providing short-term upside with long-term worries. Natural gas' recent price spike has fueled a coal comeback, but AEP and other coal-centric utilities will have to move on from their solid black gold at some point soon.

AEP is planning to raise its capital investments to $3.6 billion for 2013 in an effort to diversify its operations. The utility is focusing on natural gas, "clean coal" technology, and transmission assets to fuel future profits.

Transmission provides a unique risk-reward middle ground between generation and regulation, and AEP invested $1.7 billion in 2012 to increase its offerings in this department. Ameren (AEE 0.17%) is also upping its transmission as it exits its generation business. The utility plans to spend $2.2 billion in the next four years to modernize its transmission division, a move that should help keep the dividend stock steady as it undergoes major changes elsewhere.

Can American electrify your earnings?
AEP is well on its way to becoming a better utility. With new advancements in its generation fleet, headway on its regulatory troubles, and a nice dividend bonus for investors, the company continues to push through hard times. But its future relies heavily on strategic capital expenditures and successful transitions, something that I'd rather wait and witness before calling bull or bear on this dividend stock.