Exelon announced proposals this week to keep its current power plants punching pack for years to come. Seeking energy extensions and power provisions isn't easy, but it's often more cost-effective than adding on entirely new generation capacity. Let's see if Exelon stock has what it takes to maintain steady sales without major expenditures.

Please, sir, I want some more
Exelon (NYSE:EXC) filed renewal applications this week for two of its Illinois nuclear power stations. Collectively, the facilities generate more than 4,600 MW of electricity. That's 13% of the utility's total capacity and 24% of its nuclear capacity. For a peck of peer perspective, that's also more than FirstEnergy's (NYSE:FE) entire 3,990 MW nuclear capacity, which accounts for one-fifth of FirstEnergy's total generation.

The plants' four units are set to expire between 2024 and 2027, but the Nuclear Regulatory Commission's (NRC) ultimate decision comes only after a multiyear review. If there are complications or issues that arise, Exelon needs plenty of time to readjust its strategy.

The company expects a final decision by 2015 and, if recent trends are any indicator, Exelon can count on a regulatory green light. Renewal licenses are commonplace in the nuclear sector, where a reactor can operate for up to 60 years. Exelon's two facilities are currently celebrating their 25th and 28th birthdays. Additionally, the NRC approved Southern Company's (NYSE:SO) application for two new nuclear reactors in March 2012, the first such approval in more than 30 years.

Possibilities, not promises
Although Exelon will pursue approval with everything that it's got, the utility could ultimately turn its back on nuclear renewals. Duke Energy (NYSE:DUK) announced earlier this month that, despite applications submitted in 2008, the company would hold off on plans for new North Carolina nuclear units. Instead, the utility will continue to work on its $9 billion modernization project, including applications for two new nuclear plants in South Carolina and Florida.

Exelon's ultimate investment decision will most likely come down to nuclear's cost-competitiveness. With natural gas prices headed higher, it seems that more traditional fuels like nuclear and coal may be regaining their competitive edge. AEP (NYSE:AEP) announced this week that it's seeking proposals for up to 2.7 million tons of coal through 2016 to keep its power plants energized. At least for now, natural gas price spikes spell sustainable sales for nuclear- and coal-based companies.

Is Exelon stock worth it?
Exelon stock took a turn for the worse during the Global Recession, and it seems to be stuck in a post-recession rut. Shares are down 65% over the last five years, compared to a 7% overall decline for the Dow Jones U.S. Utilities Index and an 18% rise for the S&P 500 (INDEX: ^GSPC ). 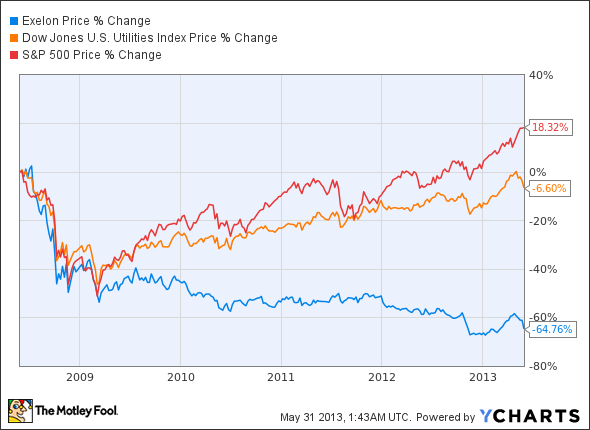 For long-term investors, Exelon stock's slump could present a unique value grab opportunity. With nuclear energy getting its groove back and an open book for new energy options, this utility's shares might just electrify your portfolio's profits.