Sometimes headlines can blow situations out of proportion, and recent headlines about Ford's recalls may have done just that. I dug into past recall numbers, and you might be surprised at what I found.

Last Friday The Detroit News reported the latest in Ford's (F -1.77%) round of vehicle recalls, noting that it would call back 465,000 vehicles for leaky fuel tanks and fire risks. Unfortunately for the Detroit automaker, it isn't the first issue that has made headlines over the last year as Ford's Escape and Fusion have been involved in numerous recalls.

However, if you were a general reader and glanced at these headlines you'd expect Ford to be near the top of vehicle recalls by manufacturer, but that's far from the truth. I dug deeper into past recall numbers, and was surprised at what I found.

By the numbers
I bet you'd be surprised to hear that in 2012 General Motor's (GM -2.57%) and Ford's vehicle recalls combined were less than Toyota's (TM -0.90%) or Honda's (HMC -0.51%). Toyota took the top spot with 5.3 million vehicles recalled last year, which was nearly 2 million more than its Japanese rival Honda at 3.4 million. Ford and GM came in with significantly fewer recalls at 1.4 and 1.5 million, respectively. That's not an unusual result either; take a look at the graph below for cumulative recalls over the last three years: 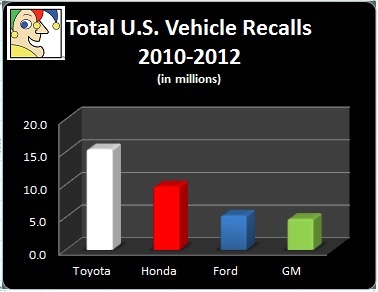 Involved in Ford's recent recall of 465,000 vehicles are the 2013 Explorer, Taurus, Flex, and Fusion as well as the Lincoln MKS, MKT, and MKZ models. According to Detroit News, Ford received about 600 complaints of fuel leaks by the end of March. With the leaks a potential cause of fires, there's no doubt that this is an important issue to fix proactively, before a mandated recall, as Ford is doing.

To help put the number of recalled vehicles in perspective, here is another recent recall for comparison. In January, Toyota recalled 1.29 million vehicles for two defects. Over 907,000, mostly Corolla models, were recalled for faulty air bags and 385,000 were recalled for defective wipers. While I'm sure the wiper issue won't cause uproar, Toyota had another string of airbag recalls in April where it had to hunt down an additional 170,000 vehicles for defective airbags.

Consumers obviously care about quality and recall issues, and it will take time for Detroit automakers to earn back the public's trust after years of poor-quality vehicles. By the same reasoning, we can't expect people to forget years of high-quality imports even though the last few years have been rough for Toyota and Honda. One thing is for sure: Ford and GM are making better vehicles than they were before the recession, and that's been proven by significantly lower recall numbers and increasing market share.

In addition to the lowered recall numbers lately, Ford is also handling these recalls extremely well. At the consumer level, it's almost gone unnoticed as Ford has voluntarily recalled this last batch of vehicles, notified the customers promptly, and offered to repair them free of charge.

That's largely why consumers have shrugged off the recall headlines while shopping at the nearest Ford dealership. For proof of that, the Fusion and Escape have combined for multiple recalls yet have set four straight months of record sales.

Bottom line
As mentioned earlier, last year Ford recalled 1.4 million vehicles and so far this year it's recalled a little over 700,000. Only time will tell how the rest of the year plays out with recalls, but Ford's CEO Alan Mulally said that the automaker was focused on quality and that Ford has learned something form each recall.

As long as that last statement holds true, and Ford continues to deal with issues quickly and effectively, it won't stir up much more than a headline or two. The truth is that Ford and GM aren't living up to the old stereotypes of making poor-quality vehicles that results in massive recalls – and that's a welcome headline for investors and consumers alike.