In the eyes of President Obama, there's little doubt about it: Climate change is happening and we have a moral obligation to stop it. With electricity output as the primary greenhouse gas polluter, will the president's new policy pave the way for environmental electricity – or will it put us all in the dark? Here's what you need to know.

The facts
Electricity production accounted for 33% of all greenhouse gas emissions in 2011. That's higher than both transportation's 28% and industry's 20% piece of the pollution pie. 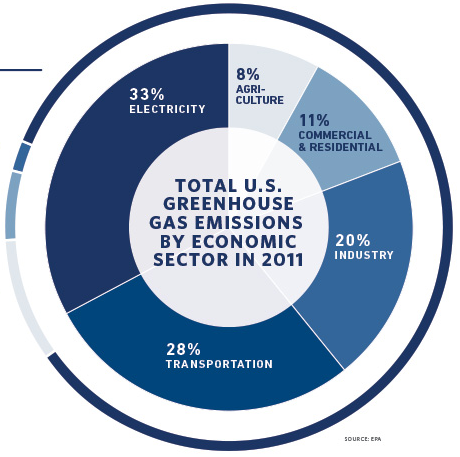 In a response letter to the president, the Edison Electric Institute noted that utilities have "been a leader in reducing criteria pollutants and greenhouse gas (GHG) emissions over the last two decades." Power sector carbon dioxide emissions are 15% below 2005 levels, and sulfur dioxide and nitrogen oxide levels are just 25% of their 1990 levels.

But that's not enough. President Obama is issuing a "Presidential Memorandum directing the Environmental Protection Agency to work expeditiously to complete carbon pollution standards for both new and existing power plants."

The POTUS' plan remains light on details, but there are three main conclusions to be drawn from his newest initiative.

1. Existing power plants aren't protected
The biggest news for the utilities sector came from the inclusion of one word: existing. The Edison Electric Institute made special mention of this in its response statement, noting that new policies and regulations should be "achievable" and "consistent with ongoing investments to transition." EEI might've been describing any number of transitioning traditional fuel utilities. TECO Energy (NYSE: TE) currently relies on coal for 61% of its regulated generation capacity, and also owns and operates coal mines capable of processing nine million tons annually. Just last month, TECO announced that it is spending $950 million to acquire a New Mexico regulated natural gas utility – but its moves may not be fast enough if Obama gets anxious.

2. Renewables are ramping up
Wind and solar generation more than doubled during the president's first term, and it doesn't look to be letting up anytime soon. NextEra Energy (NYSE:NEE) recently celebrated its 10,000 net MW of wind power, but it could be in the market for much more with new goals to accelerate clean energy permitting. In addition to a recent production tax credit extension, the president has set a goal to issue another 10,000 MW in renewables permits on public land by the end of the year.

3. "Clean" energy is in the clear
As the nation's largest producer of nuclear energy, Exelon (NASDAQ:EXC) can rest easy. The White House included "support for the safe and secure use of nuclear power" in its latest plan. Not only does the utility rely on nuclear power for 55% of its own capacity, but Exelon's massive 19,000 MW nuclear fleet produces 20% of the nation's total nuclear energy.

In the eyes of Obama, all coal is not created equal, either. "Clean coal" got a shout out from the POTUS, putting innovative coal companies like AEP (NASDAQ:AEP) and Duke Energy (NYSE:DUK) in the clean energy clear. AEP was recently awarded the Edison Electric Institute's 2013 Edison Award for its $1.7 billion 600 MW "clean coal" facility, capable of squeezing 39% efficiency out of low-sulfur coal with its "advanced ultra-supercritical steam cycle technology." Likewise, Duke just rolled out the red carpet on a 618 MW "clean coal" facility touted as "one the world's cleanest coal-fired power generating facilities." The new plant replaced an older coal-fired facility, and is capable of producing 10 times the power with 70% fewer emissions.

Foolish bottom line
As his latest inauguration speech promised, President Obama is getting serious about climate change. But for now, his moves seem mostly in line with exactly what progressive utilities are already doing. For companies that haven't kept up with the times, doing the bare minimum will continue to keep environmental costs high from year to year. For more progressive utilities taking the leap, Obama's latest should serve as nothing more than a pat on the back.