TECO Energy (NYSE: TE) reported earnings this week, making up at the bottom what it missed on its top line. With a 4.8% dividend yield and an increasingly cost-competitive, coal-centric portfolio, TECO shares are up 13% for 2013. Let's take a look at the company's latest report to see if there's still upside for this dividend stock.

Number crunching
On the top line, quarterly sales stumbled, down 9.4% year over year to $661 million. Falling sales are a common trend across utilities, but TECO also failed to live up to analysts' expectations of $668 million revenue.

But even as sales fell, TECO's industry-defying margins pulled through once again, leaving the company with $41.5 million net income for Q1 2013. For investors, that translates to $0.19 adjusted EPS, a $0.05 decrease from Q1 2012 adjusted EPS. Still, TECO's earnings beat analyst expectations of an even larger drop to $0.17 for the most recent quarter.

TECO's regulated utilities make up the majority of the company's sales, pulling in $539 million (81%) of the company's overall Q1 revenue. On the bottom line, its Tampa Electric Utility alone brought in more than 75% of TECO's net income.

But even though customers grew by 1.4% and profits managed a $400,000 increase from Q1 2012, the regulated utility suffers from out-of-date rates of return. Without a rate approval, the utility estimates its 2014 return on equity at just 6.74%. Compared to NextEra Energy's (NYSE:NEE) Florida Power & Light's current 11% ROE, TECO is lagging far behind its profit potential.

TECO filed a rate request on April 5 and, if approved, Tampa Electric will enjoy 11.25% ROE by the start of 2014. Given the company's current return levels, a rate approval is almost certain -- but how much will depend on public sentiment, macroeconomic factors, and TECO's regulatory relationship.

With a recent dip in natural gas prices, coal-centric utilities could be setting themselves up for a serious comeback.

In addition to Tampa Electric's reliance on coal for 61% of its generation capacity, TECO also owns and operates coal mines and facilities in the Appalachians capable of processing more than 9 million tons of conventional coal annually.

FirstEnergy (NYSE:FE) relies on coal for a whopping 64% of its generation, while natural gas comprises just 6% of its capacity. The company's Q1 earnings come out next Wednesday, and bullish investors will undoubtedly be on the lookout for higher 2013 guidance.

TECO's rise could be slightly more subdued, given its Peoples Gas regulated subsidiary, as well as Tampa Electric's reliance on natural gas for nearly all (39%) of its non-coal generation. Peoples Gas accounted for 33% of this quarter's net income, and return on equity is currently expected to clock in around 10.75% for 2013. A hike in natural gas prices might mean maximized margins for coal, but it could also significantly drop People Gas' profits.

A dead-end dividend?
TECO has raised its dividend 10% over the past five years as other companies cut theirs to balance books and free up funds for maintenance and modernization projects. With a current 4.6% yield, this dividend stock's distribution beats 80% of its competitors.

But dividends can be a major drain, as evidenced by Exelon's (NYSE:EXC) and Atlantic Power's (NYSE:AT) recent dividend haircuts. Exelon cut its dividend 40%, and Mr. Market has heavily rewarded its decision with a soaring stock price. Atlantic's decision may have been too little, too late, as the utility's 66% dividend division has been accompanied by a steep decline in share prices. 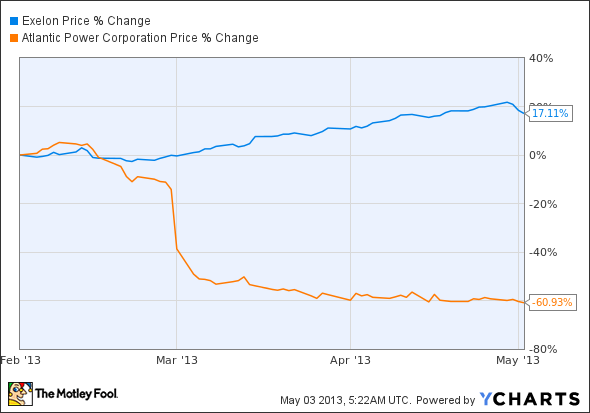 With a 95% cash dividend payout ratio, TECO's dividend is sustainable -- for now. The company is nearing its cut-off point, and would do well to explore alternative spending scenarios to diversify its natural gas/coal risk.

Is TECO a turnaround?

With a solid quarter behind it and competitive coal prices ahead, TECO is poised for profit. But high reward offers high risk, and any regulation changes or gas price fluctuations could push this dividend stock down as fast as it's currently headed up.

Looking ahead, investors will need to keep a close watch on what TECO chooses to do with its newfound finances. I'd like to see the company diversify beyond both natural gas and coal, offering investors a well-balanced energy portfolio to complement its currently balanced books.