Last week, the Dow Jones Industrial Average (DJINDICES:^DJI) ended up 0.09% at 15,559 points after hitting an all-time high Tuesday. The S&P 500 (SNPINDEX:^GSPC) trailed Mr. Jones early in the week but managed to retake some of its gains for an overall 0.23% dip. 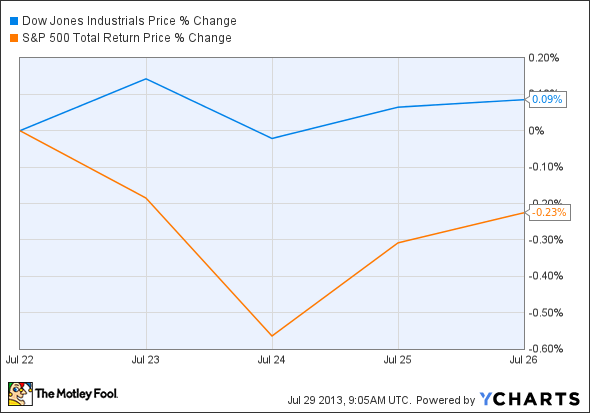 Sticky earnings
The last Dow stock to announce earnings last week was 3M (NYSE:MMM), which reported on Thursday. The company missed on the top line but made up for it with slightly better-than-expected net income. 3M's $7.75 billion in revenue came in $20 million below estimates, but EPS added an extra penny to analyst predictions. Expectations aside, sales are up a seasonally adjusted 2.9%, while EPS rose 3%.

Management pointed to overall economic conditions as a continued drag on 3M's operations, but they have high expectations for increased demand in the coming quarters. Shares edged up 0.78% last week and have been boosted 12.6% over the last three months.

Investors will also get a taste of manufacturing's latest moves from the Dallas Fed Manufacturing Survey. Although this questionnaire is limited to the Lone Star State, analysts keep a close watch on regional manufacturing as a sign of overall economic improvement. The survey showed a positive perspective for June following a pessimistic April and May. Mr. Market expects manufacturers to keep their optimism up in July, with increasing new orders and company outlooks painting a pretty picture for Texas' future.

Monday movers
Coming up on the earnings calendar today are American Capital Agency (NASDAQ:AGNC) and Herbalife (NYSE:HLF), both reporting after market close.

American Capital is an mREIT (mortgage real-estate investment trust) with massive growth in recent years, but rising interest rates could put this stock on the chopping block. The company (and most other mREITS) have taken a dip in the past quarter, with American Capital shares down 34% in the last three months. According to Fool David Hanson, that means this earnings report may not be the big market-mover it could otherwise have been. Analysts aren't expecting much, but investors should keep a close watch to make sure the company's losses don't leave it overextended.

Likewise, Herbalife has seen its own shares rise and fall not on earnings reports, but on positive and pessimistic views expressed by prominent investors Carl Icahn and Bill Ackman, respectively. The company has consistently beaten earnings estimates over the past year, and shares are up a whopping 50.8% in the last three months. Wise investors will tune out Herbalife's stock market soap opera and focus on the fundamentals that count.