The "smart money" isn't always a bunch of investing geniuses. Institutional shareholders run into the same value traps as individual investors. They try to catch the same falling knives. Insider shareholders lose their shirts when the company goes belly-up -- just like public owners such as you and me.

That said, the big investment banks and mutual fund managers are wielding much larger chunks of capital than the average investor, and insiders arguably have a better view of the company's workings than anybody else. Therefore, it's often a useful exercise to look at the institutional, insider, and public ownership profiles of your favorite stocks. Is the smart money supporting your investment thesis?

Yeah, like what?
Let's take a look at some interesting examples. The companies are arranged in order of public ownership, from lowest to highest.

Berkshire Hathaway (NYSE:BRK.B) is a great example of a balanced ownership structure. Warren Buffett owns 20.5% of his company with another 2% of the float in the hands of other insiders. Large-scale money managers hold another 42.4%, led by household names such as BlackRock and Vanguard. Activist investors don't hold much sway here, but public shareholders and other uncategorized investors account for a healthy 35.3% stake.

That's a strong balance between "smart money" and insider owners with huge personal stakes in the business. In many cases, 20% under the control of the dual-role chairman and CEO could be a warning sign, but not when the titles belong to proven master investor Warren Buffett. He's earned the right to turn this particular red flag into a marker of unique strength.

The public ownership here is moderately large. Many individual shareholders own Berkshire shares based on Buffett's genius and the top-shelf leadership bench, including fellow master investor Charlie Munger. It's generally not a haven for stock market gamblers and other unsavory types.

Similar numbers for very different reasons
Walking up the public ownership ladder, you'll find deeply troubled smartphone vendor BlackBerry (NYSE:BB) atop a very different structure. Here, insiders own a minuscule sliver of the company, and the public share is larger. The company is officially up for sale, but don't expect the current roster of major shareholders to place any serious bids.

BlackBerry's largest owner is an investment arm of Canadian insurance company Fairfax Financial. Fairfax is supposedly looking into a buyout to top off its 10.1% interest in BlackBerry, but keep in mind that this would nearly be a merger of equals; Fairfax's $8.3 billion market cap is not much larger than BlackBerry's $5.6 billion cap.

This highly volatile stock is more of a gambling chip or a risky turnaround play than a solid long-term investment. That's why you see fewer institutional investors and more individual owners compared to a stable outfit like Berkshire. It's easy to see why the smart money is backing away from this dangerous stock.

Would you buy a used car from this man? How about a billion-dollar company?
VirnetX (NYSE:VHC) is an even stranger duck. Chairman and CEO Kendall Larsen is also the mobile technology researcher's largest shareholder, with a 16.7% stake. But while Buffett's huge ownership serves as a genius investor's stamp of approval, Larsen's resume doesn't exactly inspire supreme confidence.

This company is Larsen's only real claim to fame, following a series of lower-level sales management positions with brand-name businesses. Moreover, his handling of this large stake often scares his fellow shareholders. For example, VirnetX shares plunged 21% on July 24, 2012, as veteran CNBC reporter Herb Greenberg dug up Larsen's potentially troubling ownership details. Most of Larsen's shares were tied up as collateral against some undisclosed loan, which could spell disaster if VirnetX's shares triggered a margin call.

Larsen filed a clarifying 13D report the very same day, possibly in response to Greenberg's concerns. As it turns out, the actual risk to common shareholders was very small because the credit line involved was just $5 million in size -- hardly enough to ignite a fire sale even if Larsen had to pay off the entire thing overnight.

Larsen has since rolled the $5 million credit line over into a different loan of the same size, backed by a different bank and fewer VirnetX shares. Or maybe he closed the entire credit vehicle altogether -- recent 13D filings don't mention it anymore, with no explanation to plug the gap.

And that's the point here. Larsen doesn't seem keen on keeping investors up to date with how he manages his enormous VirnetX stake. Institutional shareholders have been increasing their ownership of VirnetX in recent quarters, but the stock remains a plaything for high rollers and risk chasers. It shows in the very high public ownership rate.

A cautionary tale
I'm including Eastman Kodak here as an extreme example of gambles gone horribly wrong. The storied photography expert finally filed for bankruptcy last year, leaving banks and other serious investors little choice but to bail out overnight.

This is what an unmitigated disaster looks like, with 97% of the over-the-counter shares in the public market. There's nothing wrong with regular people making informed investments, but none of these Kodak owners seem to have read the company's Chapter 11 filings.

The company promises to maximize value for stakeholders like employees, retirees, creditors, and suppliers -- but shareholders don't even enter into the equation. When Kodak comes back from Chapter 11, the old stock will most likely be replaced by an entirely new stub, like so many airlines and automakers did before Kodak.

Big gains, small individual bets
Let's wind down this discussion on a positive note. Dell (NASDAQ:DELL.DL) and Netflix (NASDAQ:NFLX) have a couple of things in common: 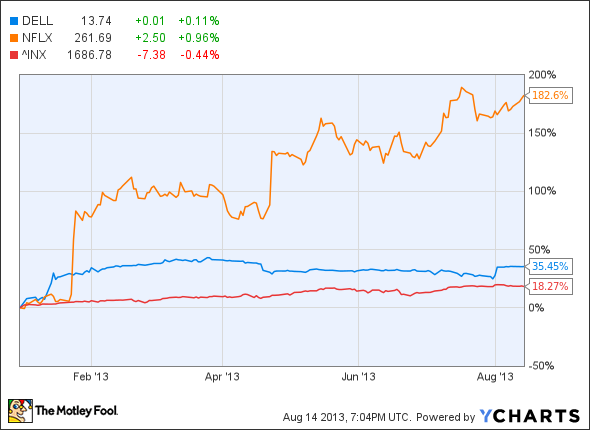 Dell is up 35% this year on the back of a simmering buyout battle. The computer systems builder will soon go private under the wing of CEO and founder Michael Dell and his private equity partners -- or get a cash infusion from Carl Icahn and his partners while staying publicly traded. Whatever the final outcome, the gains are pretty much locked in. And who gets to cash in on this jump? Mostly the "smart money" big-ticket managers.

Netflix has nearly tripled in 2013 thanks to massive subscriber growth, high-quality original content bets, and an exciting international growth strategy. Carl Icahn wanted to force a sale of this company in 2012, but has now settled in for the ride with no further buyout plans.

And once again, big banks are reaping most of the rewards here. Netflix's largest owners include Icahn and big investing firms like Vanguard, BlackRock, and T. Rowe Price. Some of these names should be familiar from our Berkshire discussion, if nothing else. So the same smart money that's betting heavily on Warren Buffett also trusts Netflix CEO Reed Hastings to take good care of their capital.

If there's anything wrong with the Netflix structure, it might be that Hastings only owns about 1.7% of the company. Foolish investors like to see somewhat larger CEO stakes than this, in order to align management's goals more closely with those of common shareholders.

Then again, Hastings' Netflix investment is worth $262 million right now, which is hardly chicken feed. And Foolish founder and leader Tom Gardner should appreciate Hastings' involvement for another underappreciated reason: "That's a really good, simple screen: looking for companies where the founder is still the CEO."

So there you have it: a handful of strikingly different ownership structures and some clues on what the various models might mean. Remember, it always helps to dig a little deeper than the raw numbers, but simple ownership figures can give you a good starting point for further research. Feel free to share your own insights in the comments below.