Over the last year, Ford's (NYSE:F) stock price has soared nearly 75%. With North America bringing in nearly all of the company's profits, there's a ton of potential growth left for Ford internationally. Of course, with any company there are hurdles to face, problems to fix, and objectives to meet. What's interesting regarding Ford is that there are big expectations for what those big catalysts will put in motion around 2015. If these three things go well, Ford could see its share price soar yet again.

Pension plan
At the end of 2012, Ford's pension plan was underfunded by a large amount – $18.7 billion. That pales in comparisons to rival General Motors' (NYSE:GM) pension fund, which was underfunded by $27.8 billion. By 2015, Ford plans to have its pension plan fully funded, a large task to be sure. Ford has consistently stepped up its discretionary contributions to bring its obligation down. It contributed $1.1 billion in 2011, then $3.4 billion in 2012, and plans to contribute $5 billion this year.

In addition to increased contributions, we can expect discount rates to rise from the low's we've seen recently. When discount rates rise, Ford's obligation to pay into its pension fund – the $18.7 billion – will decline drastically. A 70-80 basis point rise in discount rates could chop that number almost in half. If Ford's pension plan becomes fully funded by 2015, it will be a huge boost to the share price and free up capital to be spent elsewhere.

Double Chinese share
Ford was late to the game in China and is watching competitors GM and Volkswagen dominate the region. Better late than never, especially to the world's largest and fastest-growing automotive market. Ford's plan is to launch 15 models into the region by 2015 to achieve its goal of doubling its market share from 3% to 6%. That seems like small potatoes, but believe me it's a significant improvement in an industry where market share gains of a fraction of a percent are drastic.

Ford expects 40% of its revenues to be from the Asia-Pacific-Africa region by the end of the decade, so 2015 will be a pivotal step to achieving that growth. Ford just set a monthly record in China for July sales – a 71% increase over last year. Ford's year-to-date numbers are up 50% over last year and new launches of the Kuga and EcoSport continue to sell very well in China.

Break even in Europe
Europe has been a drag on Ford's profit for years. Just recently Ford was able to reduce the amount of losses it expects for 2013 – down from $2 billion to $1.8 billion. Even amid a declining European market Ford was able to increase its wholesale volume, market share, revenues, pre-tax profits, and operating margins – not too shabby, right?

Moreover, Ford was able to improve its market share mix to include much more retail share rather than rental and fleet sales. That means Ford's sales are more profitable, and the resale value of its vehicles will be higher. 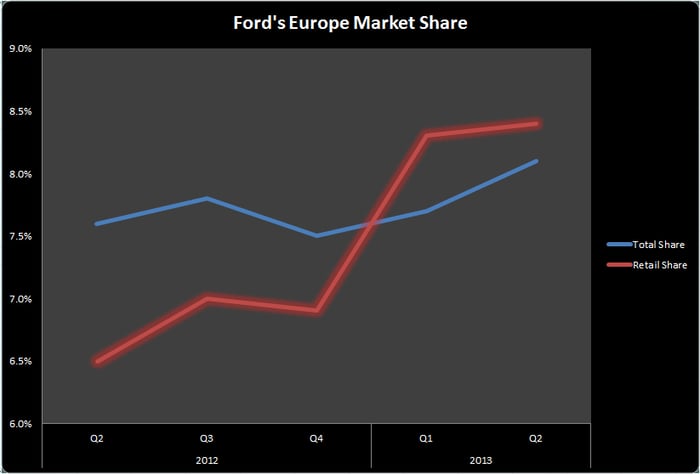 Bottom line
If Ford can break even in Europe, double its market share in China, fully fund its pension plan, and let North America continue to pump out profits – 2015 will be an excellent year for Ford. As these events develop it will add value to Ford and we'll see the stock price increase gradually. By the time 2015 gets here, I believe investors will have been well rewarded.