Please ensure Javascript is enabled for purposes of website accessibility
Log In Help Join The Motley Fool
Free Article Join Over 1 Million Premium Members And Get More In-Depth Stock Guidance and Research
By Joseph Solitro - Sep 12, 2013 at 11:31AM

Anheuser-Busch could be the top beverage stock for 2014.

Investors love companies with great products that command substantial shares of their overall markets. Few companies can rival the strength Anheuser-Busch InBev (BUD 0.84%) has in the beer market. This industry titan has pulled back significantly from its highs and could be a source of major growth for those who buy it now.

Profiling the giant
A-B InBev is the largest brewer in the world. It has more than 200 brands of beers, and 14 provide sales of more than $1 billion; these include Budweiser, Bud Light, Stella Artois, Michelob Ultra, and Beck's. It holds the No. 1 or No. 2 market position in 19 countries, including an incredible 47.6% share of the U.S. beer market.

On July 31, Anheuser-Busch reported second-quarter earnings. The results were mixed, but told a strong story overall:

Revenue grew 3.9% in the second quarter and 2.7% for the half-year of fiscal 2013. The company's power brand, Budweiser, led this growth, with sales growing an incredible 6.3% globally. Volume declined slightly in 2013, mainly due to slowed sales in Brazil, but management does not see this as being an ongoing issue. The highlight for the quarter was the company's better-than-expected EBITDA; this grew 5.8% in the quarter, primarily due to margin growth in North America, Mexico, Latin America, and the Asia-Pacific region. After the earnings release, the company received upgrades at four different firms. 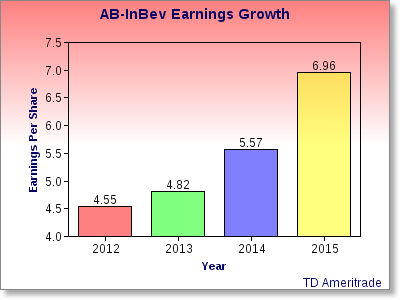 Analysts predict earnings growth of 15.6% in 2014 and an incredible 25% in 2015. This can be credited to innovation and answering consumer demands, like the company's addition of a cider beer in May and its strategic acquisition of Grupo Modelo.

Anheuser-Busch's $20 billion acquisition of Grupo Modelo officially closed in the second quarter. This acquisition brings five of the world's top six most valuable beer brands under one roof and gives the company major exposure in the Mexican beer market. A-B InBev recognizes Mexico as "the world's fourth largest profit pool for beer,"making it one of the best acquisitions that could have been made and will immediately impact earnings. I believe acquisitions to increase its presence in the world's markets will be an integral part of the company's continued growth in the future.

Dividend champion
Anheuser-Busch currently pays an annual dividend of $2.22 per share, resulting in a yield of roughly 2.35%. It has raised its dividend every year since returning to the U.S. stock markets in 2009, and its healthy cash flow will allow this trend to continue. 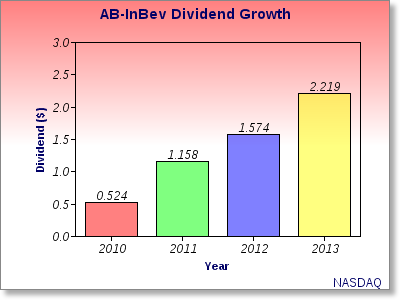 As you can see, Anheuser-Busch dominates in market cap and revenue, and has a very impressive margin. There is still plenty of room for the competition. Boston Beer and its Samuel Adams brand has been growing rapidly in the United States over the last few years. This stock has well outperformed the others, but as I see it, it has run too far to consider an investment today. If Boston Beer were to pull back to around the $190 level, where it would be trading at 40 times earnings, I would consider it a value play; but until then, I would hold off.

Molson Coors has a worldwide powerhouse brand in Coors Light, but the company does not have the product mix to dominate in the top markets like AB InBev's Budweiser and Bud Light. This company could really use some strategic acquisitions to better its position and drive growth. Molson Coors does have a healthy dividend, but for the reasons given above, I prefer Anheuser-Busch and Boston Beer over it.

The Foolish bottom line
Anheuser-Busch InBev is a worldwide leader that can provide growth and dividend income to your portfolio. It is undervalued at its current level based on forward earnings, making for a great entry point for investors. If you need international or beverage industry exposure, this looks like the perfect stock to buy. Pull the trigger on this one and add to the position on any weakness.