How these three things can help you identify rewarding investments.

For some, investing is a precise science. It's a parade of complex formulas and fancy chart patterns. However, while this type of technical analysis looks for patterns in price movements and volume, it fails to factor in the underlying fundamentals of a business. This is a mistake.

There's a better way
Investing is more than a numbers game. When you buy stock in a company, you own a piece of that company's business. In turn, you're buying a portion of the company's future earnings. Therefore, a better way to vet potential investments is to think of it as investing in companies rather than stocks. Yet, as we set out to value individual companies, certain key areas are often overlooked because they're not easily quantified or measured.

For example, "Brand loyalty, corporate culture, and trustworthy management are all things that can't be captured in a formula," as fellow Fool Morgan Housel succinctly points out. I would add disruptive technology to this list as well. Apple (AAPL -0.24%) and, more recently, Tesla Motors (TSLA 0.73%) are examples of how disruptive models can not only succeed but also transform industries.

Apple forever changed the consumer electronics market when it entered the handset business in 2007 with the introduction of the iPhone. Tesla, on the other hand, is shaking things up in the auto industry today with its disruptive retail strategy of selling cars directly to consumers.

True, brand loyalty, corporate culture, trustworthy management, and disruptive technology can't be measured from a valuation standpoint. However, they're also characteristics shared by the top-performing stocks today. Think Amazon, Google, and Starbucks. Together, these traits can help investors discover companies that are on the fast track to becoming great investments before the market does.

1. Consumer appeal
Brand loyalty is one of the telltale signs of a Rule Breaker. Strong consumer appeal, for example, is how niche yoga-apparel maker lululemon athletica (LULU -0.52%) became a household name, seemingly overnight. Its first store opened in 2000 in Canada, and by 2012, Lululemon boasted the third highest retail sales per square foot in the United States, according to research company Retail Sails. This is particularly impressive since it relies on grassroots marketing, while larger rivals including Nike and Under Armour spend millions of dollars each year promoting their products.

Lululemon's stock performance over the last five years further emphasizes the power of a strong brand. 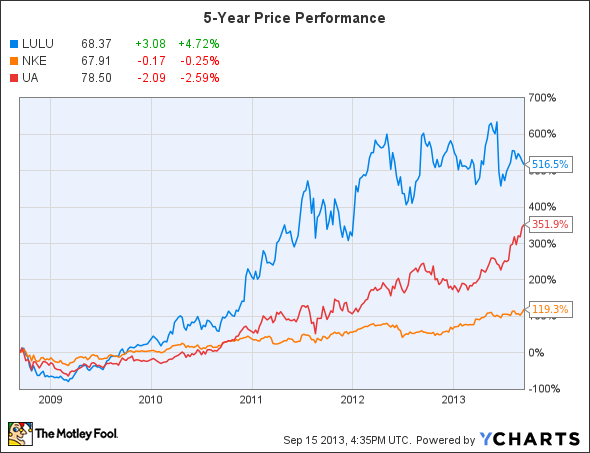 A cult-like following gives Lululemon pricing power over its rivals, which explains why so many people are willing to cough up more than $100 for a pair of Lulu pants. As a result, the Canadian retailer enjoys some of the highest profit margins in the industry today. 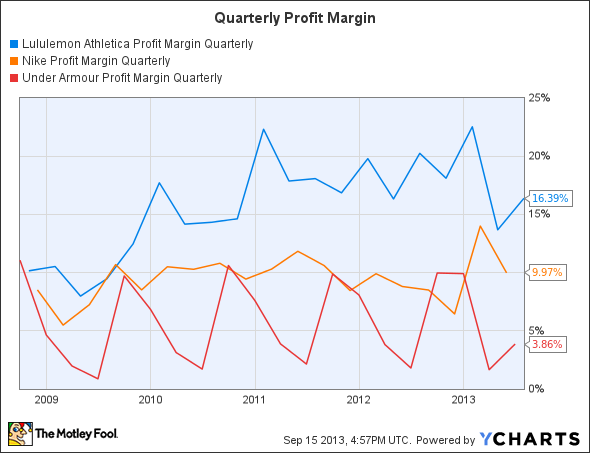 2. Corporate culture
Lululemon also meets the mark for corporate culture. The retailer offers free yoga classes in all of its stores and works with fitness leaders from the community to build brand awareness. Additionally, each year the company's stores launch outreach programs in their communities as part of Lululemon's philanthropy program, Metta Movement. These initiatives help Lululemon evolve as a lifestyle brand and create a positive experience for customers in those communities.

However, Lululemon's reign ends here. The third quality, trustworthy management, is one the company currently lacks. In June, Lululemon CEO Christine Day shocked investors by announcing she would be leaving the company. The news pushed shares down 20% in just two days, and for good reason. Under Day's leadership, Lululemon's annual revenue has grown to $1.37 billion, or about five times what it was before she took over as CEO. A new CEO has yet to be named.

3. Trustworthy management
Great management often means the difference between winning stocks and mediocre ones. There couldn't be a better example of this today than Tesla CEO Elon Musk. With Musk at the helm, Tesla has grown from a little-known electric-vehicle manufacturer to one of the most talked-about auto companies on the planet.

Musk's visionary leadership has led Tesla to a $21 billion market cap today. His vision can be seen in the world's fastest EV charging stations, known as Tesla's Supercharger Network, or in the company's groundbreaking battery swap program, which promises drivers a full charge in just 90 seconds. These are just a few examples of how Tesla is changing the world thanks to smart leadership.

When you're sizing up the quality of top management, past performance can be a strong indicator. In Musk's case, success is a way of life. Last year, he celebrated two historic achievements -- the docking of his SpaceX rocket with the International Space Station and the launch of the Tesla Model S. Not to mention, one of Musk's earlier achievements was co-founding PayPal, which eBay purchased in 2002 for a cool $1.5 billion. Whether  it's Tesla's Elon Musk, Amazon's Jeff Bezos, or the late Steve Jobs, visionary leadership is one telltale sign of a Rule Breaker stock.

Putting the strategy to work
Understanding the underlying fundamentals of a business can often be just as telling as reading its Securities and Exchange Commission filings. When you're searching for your next 10-bagger, look for companies with strong brand loyalty, well-defined corporate culture, and trustworthy management. Nearly all of the top-performing growth stocks in recent years have embodied at least two of the three traits. Ultimately, these give a company a lasting competitive edge against industry peers.