Let's see what the numbers say about Whole Foods (WFM).

Investors love stocks that consistently beat the Street without getting ahead of their fundamentals and risking a meltdown. The best stocks offer sustainable market-beating gains, with robust and improving financial metrics that support strong price growth. Does Whole Foods Market (WFM) fit the bill? Let's look at what its recent results tell us about its potential for future gains.

What we're looking for
The graphs you're about to see tell Whole Foods's story, and we'll be grading the quality of that story in several ways:

What the numbers tell you
Now, let's look at Whole Foods's key statistics: 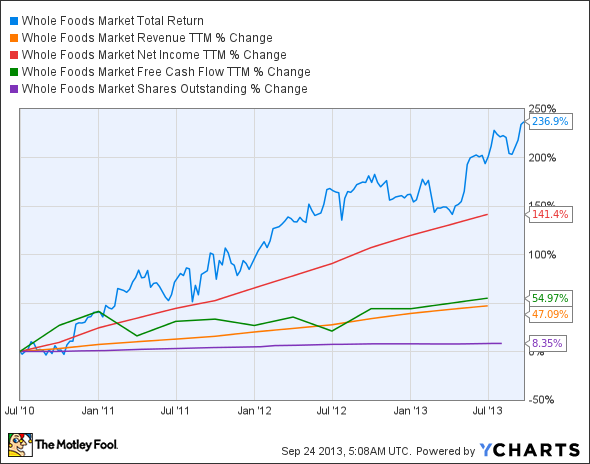 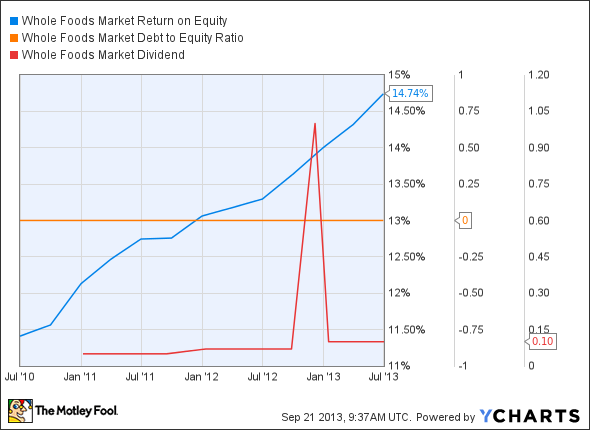 How we got here and where we're going
Whole Foods has all the hallmarks of a fan-favorite growth stock, scoring six out of nine passing grades in most of the usual growth-favored metrics. Its revenue is moving strongly in a positive direction, and net income is improving at an even faster rate. However, the high-end grocer's share price has moved far ahead of its fundamentals, and the present high level of dividend payouts -- while almost certainly still affected by a recent special dividend -- are worryingly high as a percent of free cash flow. That free cash flow, despite exhibiting slower growth than Whole Foods' bottom line, is more than double its net income on a nominal basis. Is the company's present high level of shareholder returns doomed to regress to a level more in line with its fundamental growth, or will Whole Foods accelerate on the bottom line in the quarters to come? Let's dig a little deeper to find out.

Whole Foods, which has long been on the vanguard of the organic food movement, has continued to thrive as consumers turn away from the industrial-food ecosystem, but it may not be fully capitalizing on this niche at present. The global organic-food market is estimated to grow at an annualized rate of 13% through the end of 2015. In its latest quarter, Whole Foods opened three new stores, and same-store sales rose an impressive 7.5% -- at least, it would be impressive if it wasn't a hair over half the growth rate expected out of the overall organic segment.

Fool contributor Anup Singh points out that Whole Foods has been expanding its geographical footprint in the U.S., especially in lower-income areas and smaller markets. Whole Foods' mid-range competitor Kroger (KR 0.85%) has also been expanding into the South-East and Mid-Atlantic markets, which may present stiff competition in the yuppie enclaves of the D.C.-to-New York corridor. Kroger's pending acquisition of Harris Teeter also enhances its competitive strengths against Whole Foods -- while not a direct competitor in upscale organic grocery retail, Harris Teeter is nevertheless held in higher regard than the typical supermarket chain.

Whole Foods is also facing competition from Sprouts Farmers Market (SFM -3.39%), which has been aggressively expanding since its IPO last year. Fool contributor Ted Cooper notes that the company has already managed to triple its size in three years to 163 stores across eight states, and it has plans to launch 19 new stores by the end of this year. Increased competition has pressured Whole Foods into giving far more discounts than normal to match competitors' prices and counteract its "whole paycheck" stigma. My Foolish colleague Alyce Lomax notes that California regulators have recently sued Whole Foods for selling pesticides in its stores, which could cast a negative light on its Earth-friendly (or at least stomach-friendly) image. Whole Foods has also been hit with a lawsuit over its "natural" private-label soda, which was not exactly true to its labeling. These issues need to be ironed out quickly to avoid a consumer backlash, as Whole Foods is no longer the only organic game in town.

Putting the pieces together
Today, Whole Foods has some of the qualities that make up a great stock, but no stock is truly perfect. Digging deeper can help you uncover the answers you need to make a great buy -- or to stay away from a stock that's going nowhere.

Fool contributor Alex Planes has no position in any stocks mentioned. The Motley Fool recommends and owns shares of Whole Foods Market. Try any of our Foolish newsletter services free for 30 days. We Fools don't all hold the same opinions, but we all believe that considering a diverse range of insights makes us better investors. The Motley Fool has a disclosure policy.