In an improving economic environment, there are two things that will definitely happen at some point. First, investors will begin to shift more of their savings into equities. This has been the trend for the last couple of years in the U.S., and there is good evidence that it's still happening.

Also, interest rates will eventually rise (they can't get much lower), which is a good indicator that increases in the Fed's interest rates aren't too far away. One sector that benefits tremendously from both of these things is the investment services industry, and as Raymond James Financial (NYSE:RJF) is one of the more ambitious names in the space, it's worth a look.

How do these things help?
First, let's discuss briefly how these things help investment-related companies. As far as the shift to equities is concerned, this helps in terms of commissions as the shift is made (investors sell one type of investment, like a bond, then use the proceeds to buy stocks). It also increases the firm's assets under management because during good economic times, the markets increase.

So, let's say a company has $20 billion in assets under management, and the markets rise by 10%. Without taking into account increased commissions as mentioned, the firm's assets will have risen to $22 billion, setting up higher future income.

As far as interest rates go, companies will profit from their cash and money market investments. As rates rise, the spread (profit margin) between the rate at which a company must pay an account holder and the higher rate that a company can earn by putting deposits to work will widen. Even though cash investments drop during boom times, this can still be a positive impact on these companies' bottom lines.

Financial firms generally borrow at short-term rates and lend at long-term rates, and while we wouldn't think of an investment management company as a lender, consider how many people buy on margin, the interest rate of which generally changes over time.

The benefit of rising rates can already be seen in the results of many of the big banks. Wells Fargo's (NYSE:WFC) recent quarterly earnings of $0.99 per share are an all-time record for the company, and the higher interest rates were part of the reason the company's return on equity rose to 13.9% from 12.7% for the year-ago period.

Who is Raymond James?
Raymond James Financial is involved in virtually all aspects of the securities business, with underwriting, distribution, trading, and brokerage operations. The company provides a range of investment management services to both private and institutional clients.

One of the best reasons to love Raymond James is that the company is aggressively trying to grow its assets under management and its brand name through acquisitions and by seeking new clients. As far as acquisitions go, Raymond James made a very significant one last April, acquiring the Morgan Keegan investment management brand from Regions Financial (NYSE:RF) for $930 million, which added around $30 billion to the company's assets under management, bringing the total to about $405 billion.

This deal was a great one for both companies. It allowed Regions to focus on its core banking business while improving its financial health with the proceeds from the sale. It made Raymond James one of the largest independent wealth management firms in the U.S.

Over the last decade in general, Raymond James has done an excellent job of growing its revenue, and has recovered from the financial crisis and then some, with the last two years' annual revenue having topped even its best pre-crisis years. 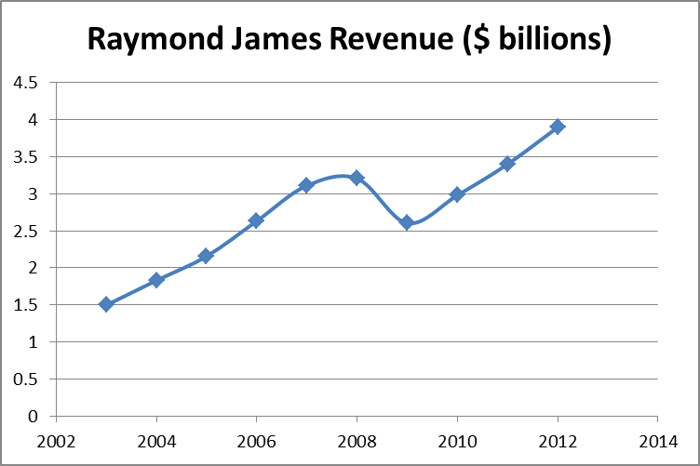 The Foolish bottom line
Raymond James is a good play on the benefits of the improving economy because it is one of the most ambitious companies in the sector in terms of growth plans, and it seems to be succeeding admirably. The Morgan Keegan acquisition will accelerate its growth, but bear in mind that the almost linear growth in the chart above was before the acquisition, and it just represents the organic growth of the company.

The combination of a shift to equities and the rise in interest rates will help the company continue on its path of consistent growth for years to come.