The cigarette market has been shrinking by between 3.5% and 4% a year as a result of the health problems that come with the product. With the rise of e-cigarettes, tobacco companies have a potentially profitable alternative to traditional cigarettes. Tobacco company Lorillard (NYSE:LO.DL) is currently leading this market and investing in the growing sector.

The new Blu
E-cigarettes are battery operated nicotine inhalers that heat a liquid into an inhalable vapor. They are currently viewed as a "healthier" alternative to traditional cigarettes because they don't contain the carcinogens in a typical tobacco cigarette.

Lorillard's e-cigarette, Blu eCig, is currently the number one e-cigarette with a 49% market share in the U.S. This comes as a result of the intense marketing and investment Lorillard has put behind the e-cig brand. The current investment cost means that the operating profit for Blu eCigs is break even. While Blu is not currently adding to Lorillard's profits, solidifying a brand in the emerging market means higher future earnings for long term investors.

Lorillard recently acquired British e-cigarette company SKYCIG for $48.6 million in order to better position its e-cigs internationally. According to the company, the public health community in the U.K. has largely accepted e-cigarettes, but the market does not have a clear brand leader. This offers Lorillard an opportunity to turn SKYCIG into the country's leading e-cigarette brand. SKYCIG also gives the company an organizational platform to expand Blu eCigs through Europe. The acquisition has helped Lorillard with international positioning, and now the company will look to achieve further growth organically.

The recent launches
While Lorillard has the leading e-cigarette, other major tobacco companies like Reynolds American (NYSE:RAI) and Altria (NYSE:MO) have begun making versions of their own.

Reynolds' e-cigarette VUSE launched in Colorado during the summer ,and it has already taken the market-leading position in the state. VUSE is the only e-cigarette produced in America, and it boasts Smart Technology that helps make it more satisfying and efficient than other e-cigarettes. With its success in Colorado, Reynolds has plans to announce an international launch soon.

Altria launched its e-cigarette MarkTen in India during August. Altria is pleased with the results so far, and the company plans an American launch in Arizona during December. MarkTen is a little late to the market, but with the massive Altria behind it there is a good chance it will quickly gain popularity.

Of these three companies, Lorillard experienced the highest year to date revenue growth. 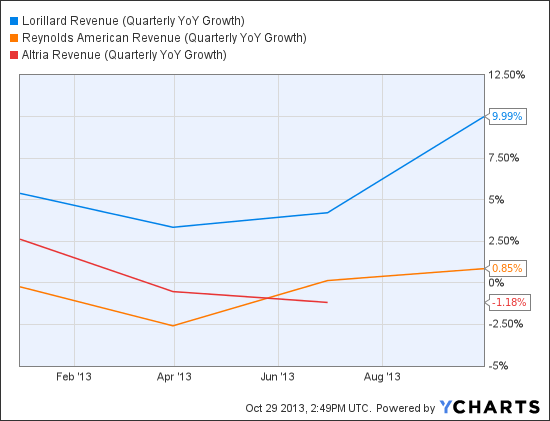 This comes as a result of Lorillard's growing cigarette market share and the success of Blu eCigs. However, now that other major tobacco companies are in the e-cigarette business, Lorillard could find it hard to maintain its dominant market share.

Regulation
While the e-cigarette market has taken off, there is still little regulation on the product by the FDA. Potential regulations on Internet sales could arise to keep the smoking product out of the hands of children under 18. The agency is also considering restrictions on television, radio, and print advertisements for the product.

Thorough health research still needs to be done on the newer product, but initial regulations should be upon tobacco companies soon.

Final thoughts
The e-cigarette market is quickly growing, and big tobacco companies have entered the fray. Sales of the new products will partially cannibalize traditional cigarettes, but they will eventually help grow earnings as the popularity of e-cigarettes increases. Lorillard has the advantage of being the first big tobacco company with an e-cigarette brand. If it continues to invest in its brand and the e-cigarette technology, then it should be able to keep its leading position.