Should Monster Beverage feel threatened by Big Soda or is the threat coming from smaller upstarts?

The newest threat to Monster Beverage (MNST 0.38%) is in stores, and will soon roll out nationwide. This Monster-killer is called Zum XR.

Zum XR, launched in April 2012, is an energy drink featuring time-release caffeine, and is gaining shelf space in retail outlets like bicycle stores, athletic clubs, GNC's, and convenience stores. Zum XR's biggest retail outlet is Whole Foods Market in the western US. According to an interview with Zum XR's founder Bob Niichel in Beverage Daily, this product had one of the most successful beverage launches ever at Whole Foods.

Zum XR's advantage is its time release soluble beads of caffeine, which provide a smooth release of the energy components to avoid the "crash" that other energy drinks have.

Growth slowing and legal wrangling
Monster Beverage boasts 20 years of gross sales growth, but has recently been beset by legal and regulatory challenges. In the second quarter the company's bottom line was hit with expenses of $4.2 million to defend the brand's safety record.

Sales of energy drinks overall have been affected by health and safety concerns. CEO Rodney Sacks said on the second quarter call in August:

"..expansion into newer markets is probably slowing a little bit. As we're focusing on the existing markets we're in, we will still expand. But it certainly won't be at the rate over the past couple of years."

The state of the competition
However, the best news from the call was that the company is close to overtaking privately-held Red Bull in US market share. Monster now has 34% share compared to Red Bull's 35.4%, according to Nielsen. Smaller players in the space like Rockstar, 5-Hour, and AMP are all seeing sales declines with a seeming duopoly of Red Bull and Monster shaping up.

Monster also has many different beverage brands like natural sodas, juices, teas, and functional waters in addition to its energy category, but these still represent a fraction of the business. Its latest 10-K notes that Monster Energy drinks represent 92.3% of sales and are available in over 40 different varieties.

Monster has been growing globally and is now in 90 countries. In 2012 Monster moved into Japan and Brazil, and expects to enter the Indian market soon. Its only competitors that have similar global reach are Coca-Cola (KO 0.28%) in 200-plus countries, and PepsiCo (PEP 0.83%), which is also in over 200 countries.

Interestingly, Coca-Cola is not only a rival but also a distributor of Monster drinks in the US and Canada. Monster also contracts with Anheuser-Busch in the US and Brazil.

Coca-Cola only has four energy drink brands: Full Throttle, NOS, Power Play, and Mother, which comprise a tiny fraction of Coca-Cola's portfolio of over 3,500 beverages. Coca-Cola does compete against Monster on non-energy lines.

As noted on Monster's annual report, the risks to the company include a plenitude of even smaller upstarts, both domestically and globally, but none with such a promising concept as Zum XR with the weight of Whole Foods Market behind it. Zum XR will soon be pitching to the Sprouts chain of natural markets, where Niichel noted that the company has removed Monster and Rockstar.

As seen in the chart below, Monster also considers Dr. Pepper Snapple and much smaller competitors Cott, National Beverage, and Jones Soda as part of its peer group for comparison purposes. All four offer some version of an energy drink. 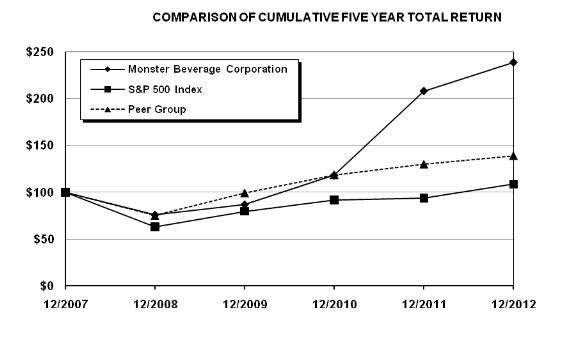 Interestingly, Monster doesn't include PepsiCo in that chart's peer group even though PepsiCo sells AMP and Kickstart, a Mountain Dew line extension. In any case, as the Nielsen numbers showed, AMP sales are declining against Monster.

Roughly half of PepsiCo sales come from food, particularly salty snacks. AMP and Kickstart, which comprise an even smaller fraction of beverage sales, are not really needle movers for PepsiCo. When PepsiCo recently reported earnings, the best numbers came from its salty snacks.

The Foolish takeaway
With PepsiCo and Coca-Cola closely tracking each other on valuation at around ~20 P/E and yields of about ~2.75%, the question remains: is it better to buy faster-growing energy drink leader Monster, especially in an environment of slowing soda sales? Monster has a P/E of 31 and has no dividend, and as reported on its 10-K, Monster has no foreseeable plans to offer one.

Although Monster's growth is slowing, it is still growing faster than the soda giants.  Most promising is that it's finally challenging Red Bull's dominant position in the energy drink market.

Despite a promising $1 million in sales so far, Zum XR is years away from seriously challenging Monster.. Until then, the best way to get into the energy drink game is to stick with the Monster.