Pandora Media (NYSE:P) is a company very much under attack, with Apple's (NASDAQ:AAPL) iTunes Radio serving as only the latest entrant in an increasingly competitive streaming music market. At least that's what much of the recent media coverage would have investors think. 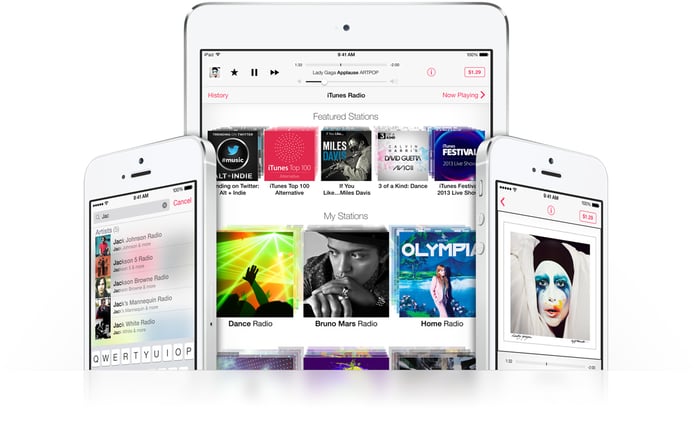 I, as much as anyone, have been guilty of falling into the trap of thinking that Apple is simply destined to crush Pandora, a view I've since publicly revised.

Although investors will have to wait until Pandora reports its quarterly results some time later this month for another update on how it's faring against Apple's radio offering, a recent study indicated that Pandora's booming business seems to humming along just fine.

Looking at the long odds
Investors are certainly justified in worrying about the impact Apple's iTunes Radio could have on Pandora.

Apple's a force to be reckoned with any time it enters a new market. As the world's largest tech company and one of the world's largest sellers of music, Apple's size and scale give it a nearly automatic leg up against most competitors in the media space. Heck, at Pandora's current size, Apple could just buy Pandora 29 times over with its current $146 billion stock pile of cash and investments.

Pandora investors were understandably anxious in the days leading up to Apple's iTunes Radio launch during the global rollout of its latest operating system—iOS 7. In addition, they were given renewed cause for concern last month after Apple announced that over 11 million unique users had tried iTunes Radio after its first three days of availability. This understandably spooked some Pandora investors, sending its shares down more than 10% in the day following Apple's announcement.

Such a figure certainly painted a bleak picture for Pandora's prospects against a tech giant like Apple. After all, at its current rate of adoption, Apple's iTunes Radio would outgrow Pandora's active user base in a mere 20 days.

And while definitely not encouraging, Apple's usage figures doesn't tell investors much beyond the fact that a lot of people simply tried its new radio service. What's still virtually unknown is the spillover effect these new Apple iTunes Radio users could have on Pandora.

Numbers don't lie, or do they?
Relying on isolated statistics like Apple's adoption figures overlooks the obvious difference between simply trying a service such as Apple's iTunes Radio and actually switching to the service as part of your daily usage. In fact, some research that's emerged since Apple's iTunes Radio launch paints a far less bleak picture of Pandora's competitive prospects in this brave new world.

What did they find?
Apparently, despite all the hubbub about Apple's iTunes Radio, Pandora hasn't seen the massive usage declines Apple's single statistic might have you think. According to Canaccord's survey, only 8% of the iOS users they surveyed said they had completely ditched Pandora in favor of Apple's iTunes Radio.

That isn't to say that Apple's new radio product hadn't left any impact. According to the survey, 44% of those that had tried Apple's iTunes Radio had indicated they use Pandora and Apple's iTunes Radio roughly equally. However especially in the early innings of this storyline, it makes sense that Pandora could see some usage get cannibalized by Apple's new and intriguing product. It is, after all, the new toy in town.

However, the report also noted one factor that very well could be Pandora's saving grace in staving off Apple' iTunes Radio over the long-term. Thanks to its years of refining its service's predictive abilities through its Music Genome Project, survey respondents reported that Pandora generated music they wanted to hear 72% of the time, versus only 63% of the time for iTunes Radio.

What this means for investors
This storyline is still unfolding, so it's hard to get a great sense of just how truly disruptive Apple's iTunes Radio could be to Pandora over the long term.

This is only one of the first attempts to quantify just how directly Pandora and iTunes radio are competing. However, if this is any indication, it appears Pandora might be better positioned to compete in this major growth market.