Sears Holdings (NASDAQ:SHLDQ) has announced it's lopping off more assets by splitting-off the Land's End brand and Sears Auto Center. This follows the split-offs of its Orchard Supply Hardware, Sears Canada, and Sears Hometown and Outlet Stores (NASDAQ:SHOS). The company also announced more sales of US Sears stores in prime malls and the sale of five Sears Canada store leases.

Although the announcement initially boosted the stock by some 12%, enthusiasm has waned as investors wonder how much more the company can amputate to offset mounting losses. The company pre-announced negative earnings before interest, taxes, depreciation, and amortization of $250-$300 million for the third quarter, a worse loss than the prior year's quarter negative adjusted EBITDA of $156 million. This would translate to a net loss between $532 and $582 million for the third quarter.

Cutting into the muscle
Morningstar analyst Paul Swinand told Reuters,"They have cut the fat. Now they are cutting in the muscle." The goal of all of this surgery? According to the Sears Holdings press release, nothing less than the " ...transformation into a leading integrated retailer that fosters relationships with members through our Shop Your Way platform."

Sears added real-life Moneyball hero Paul De Podesta to the board and to manage big data on the "Shop Your Way" loyalty program. The members' program is primarily an online platform somewhat like the "Cartwheel" member initiative at Target (NYSE:TGT) or J.C. Penney's "JCPRewards" program. It's quite possible that Sears' brick and mortar presence will be virtually nil in a few short years.

A Zack's analyst note applauds the loyalty program and split offs saying,"We commend the company's strategy of capitalizing on opportunities, while increasing profitability through its revamped organizational structure and new operating model. All these measures will expectedly drive top- and bottom-line growth."

Brian Sozzi of Belus Capital Advisors has doubts that will happen. Of these latest divestitures he said, "... with today's announcement, they are dismembering their body". Weeks before, Sozzi posted photos of the decrepit condition of various Sears stores he visited to better illustrate his Sell recommendation.

Santoli goes so far to say,"Lampert has carved up the company in a way that seems to ensure its financial liquidity while maintaining a wide array of options for preserving and increasing eventual investor value -- even if the physical retail business is radically shrunk or even wound down."

Healthier alternatives
Earlier this year, hedge fund titan Whitney Tilson of Kase Capital wrote in an investor note that he suspects Sears Holdings' CEO Eddie Lampert is quietly transferring the best of Sears' assets over to Sears Hometown as the company shutters more of the big-box Sears stores. Tilson took a starter position in Sears Hometown.

Tilson said he would have taken a larger position but for valuation. The stock is now on sale, off more than 50% from its 52-week high after a dismal second quarter report in which net income declined from $0.91 per share in the prior-year quarter to $0.40. 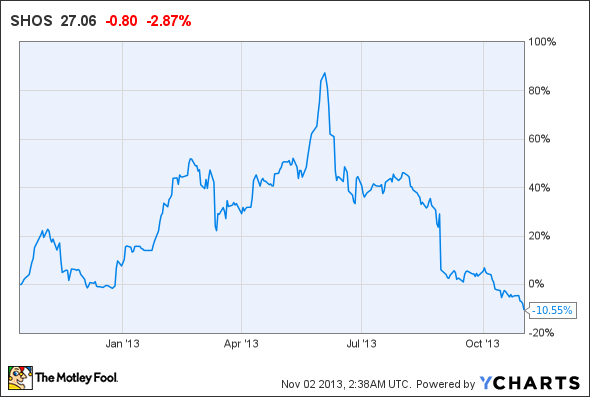 Alternatively, Target is worth considering. It's growing in Canada, offers a 2.7% yield, and is trading at a trailing earnings multiple of 15.6. It, too, is on sale, under-performing the S&P 500 index this year.

In a challenging retail environment, Target's aforementioned "Cartwheel" mobile deal and coupon app may give the company the edge over rival Wal-Mart this holiday season. Target also plans to have the popular ship-to-store option available during the holiday season. 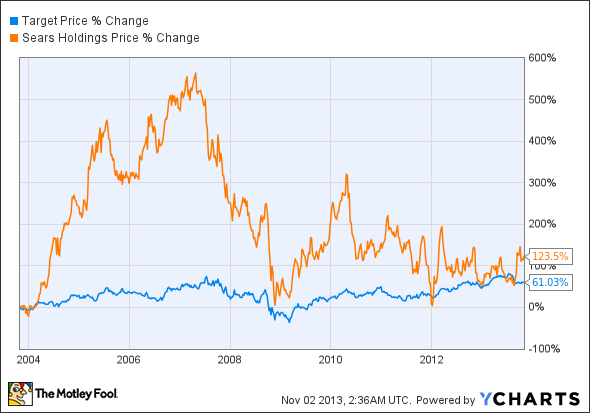 Cut to the chase
Sears Holdings is a battleground stock performing battlefield surgery on itself. Sum-of-the-parts investors have fewer parts now to count on. Sears and KMart stores will soon be shadows of their former selves.

Both Sears Hometown and Target have better prognoses than Sears Holdings. Of the two, Target is the better value, but Sears Hometown is having a big sale.