The thing is, the quarter actually wasn't all that bad.

Keeping in mind that Whole Foods had one less week in Q4 this year, sales still managed to increase 2% from the same period last year, to roughly $3 billion, or roughly in line with average expectations for revenue of $3.04 billion. On a comparable 12-week basis, sales jumped 11%, thanks both to Whole Foods' opening 12 new stores during the quarter, and a solid comparable-store sales increase of 5.9%.

Meanwhile, Whole Foods' earnings once again outpaced sales growth, increasing 6%, to $0.32 per share, and beating estimates by $0.01. Gross profit also increased over the same year-ago period, this time by 37 basis points, to 35.6% of sales.

So what's the problem?
If you're searching for the culprit for today's drop, look no further than Whole Foods' revised 2014 outlook.

Those numbers are still solid, but you can't blame investors for taking a step back considering shares closed yesterday around 44 times trailing earnings, and 37 times next year's estimates. After today's drop, Whole Foods stock currently sports lofty trailing and forward earnings multiples of 40.3 and 33.8, respectively.

But, as a Whole Foods shareholder myself, does that mean I'll be running for the hills? Absolutely not.

After all, the company's been talking for the past several quarters about moderating expectations, especially as they need to continue focusing on lower-priced (and, therefore, lower-margin) products to maintain its value proposition for increasingly cost-conscious consumers. If they don't, those consumers might be tempted to instead roll down the aisles of their friendly neighborhood Safeway or Kroger store to save a few bucks.

Come to think of it, this feels almost exactly like a repeat of Whole Foods' fiscal first-quarter results back in February, when weak guidance spoiled an otherwise solid report. When shares continued to fall through April, that drop ultimately turned into a fantastic buying opportunity, for which investors have been rewarded with a 40% return, even after today's drop.

And sure, Whole Foods stock isn't particularly cheap right now; but when has it ever been? Remember, Whole Foods' average trailing price to earnings ratio over the past five years is a lofty 33.7, but take a look at how it has performed relative to the broader market over the same period: 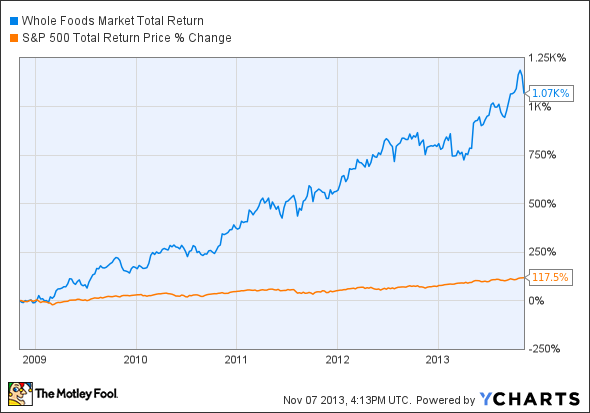 In short, I wouldn't back up the truck at today's levels. But I also certainly won't be selling anytime soon.

Remember, despite its lowered guidance over the short term, Whole Foods pays a nice little dividend, and is still targeting 1,000 locations in the U.S. alone over the long term, or nearly triple the 367 stores it operates as of today.

And if it's any consolation, Whole Foods increased that quarterly dividend today by 20%, to $0.12 per share, and also added another $500 million to its outstanding share repurchase authorization to bring the new total to $800 million -- none of which has been used at this point.

In the end, while Whole Foods stock may trade at a premium, I'm still convinced Whole Foods itself is a superior business for which that premium is well deserved. If shares continue to languish from here, rest assured that I'll be happily adding to my position.