You'll never guess what the Founder of Taco Bell did before starting this major fast food franchise.

With lots of fast-food restaurants switching their menus to reflect healthy forms of eating, one thing is certain – Yum! Brands, (YUM -0.70%) subsidiary Taco Bell has not caved to the pressure. Surprisingly enough, Taco Bell sales are still strong thanks to some of its newest products like the Doritos Locos Tacos which is definitely not healthy. In fact, the Taco Bell brand has done positively well with sales growth over the past seven quarters aside from Yum! Brands last four quarterly reports. Taco Bell is here to stay, at least for now, so educate yourself on its history. 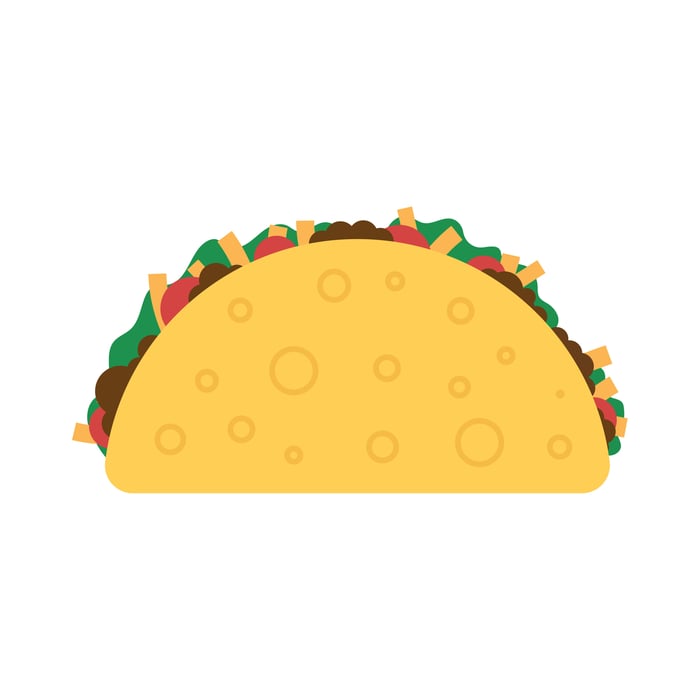 Hot Dog Bell?
At 23 years old, founder Glen Bell started his first restaurant – a hot dog stand in San Bernardino, California. He called his hot dog stand "Bell's Drive-In." In 1952, Bell sold his hot dog stand to start another food restaurant two years later, this time selling hot dogs, hamburgers, milkshakes, and tacos which he called "Taco Tia." Bell's tacos were a huge hit with customers since most fast-food restaurants at that time sold only hot dogs or hamburgers and the typical Mexican restaurants took forever to prepare a single taco "to go." After managing four El Tacos for a few years in southern California and his own Taco Tia, Bell sold it all in 1962 to start Taco Bell. That same year, the first Taco Bell opened in Downey, California.

Taco Bell has tried to enter the Mexican market twice and failed both times
Although Americans view Taco Bell's food as great-tasting "Mexican" food, Residents in Mexico view Taco Bell's food differently. Taco Bell first tried to enter the Mexican market in 1992, but its restaurants all closed within two years. Taco Bell tried again in 2007 to successfully open a restaurant in Mexico City. This time, the company made sure to heavily emphasize the fact that Taco Bell's food is very much "Americanized;" thus, adding French fries to the menu. Unfortunately, this strategy also failed, and the Mexico City Taco Bell closed down in 2010. For those who have experienced authentic, Mexican food, the taste of Taco Bell's menu does not go over well, and for Mexico's residents, this is the case – they want nothing to do with Taco Bell.

Taco Bell and McDonalds are inseparable
Many people are unaware that the oldest Taco Bell and McDonald's are located in the same town – Downey, California. The first and oldest Taco Bell built by the founder himself is still open for business under the original logo. The oldest McDonald's is actually not the first ever opened, but the third. Built in 1953, just 13 years after the McDonald's brothers opened the first one, the Downey location still is in operation after enduring a two year, full-scale renovation back in 1994 to repair earthquake damage, install a drive-thru window, and add indoor seating. Glen Bell never fully parted from the world of hamburger joints, and this oddly enough coincidence is proof.

Bell popularized the hard taco shell
Bell and other fans of tacos at the time grew tired of how long it took to wait for a taco to be prepared by a Mexican restaurant because the cooks took time to warm the tortilla, cook the meat, and stuff the taco with vegetables and cheeses. Bell knew there had to be an easier and time-efficient way to prepare a taco, leading to his invention of the hard shell. Bell experimented with a deep fryer, folding the tortilla to appear bent, dipping it in cooking oil, and tossing it into the deep fryer. His invention popularized the hard shell taco while also speeding up the preparation process. Later, his invention made the Doritos Locos Taco into a success story/reality.

Three years in the making
People know how popular the success of Doritos Locos Tacos has been for both Taco Bell and PepsiCo's (PEP -0.35%) Frito-Lays. What they don't know is how long it took Taco Bell and Frito-Lays to launch the sensational product. What started out as brainstorming ideas for a co-branded product led to months of testing the product and making modifications. The difficult thing was to give the taco shell the same texture and flavor of a nacho cheese Doritos chip while using a yellow corn taco shell. After three years of back and forth adjustments to perfect the product, Taco Bell launched its Doritos Locos Tacos to the public in March 2012. The new taco invention added 15,000 jobs to the company, selling 500 million Doritos Locos Tacos in just 14 months and breaking $1 billion in sales in October 2013.

Fool contributor Natalie O'Reilly has no position in any stocks mentioned. The Motley Fool recommends PepsiCo. The Motley Fool owns shares of PepsiCo. We Fools may not all hold the same opinions, but we all believe that considering a diverse range of insights makes us better investors. The Motley Fool has a disclosure policy.