If you pay close attention to small changes in a company's quarterly report, then don't look up, because a dark cloud recently fell on Whole Foods Market (NASDAQ:WFM). The company's fourth-quarter results indicated that competition in organic and natural foods is increasing. This is obviously a negative sign. The stock is down more than 10% at the time of this writing as panicked investors flee.

On the other hand, will McDonald's go out of business because there are more quick-service restaurants opening? Is Coca-Cola falling apart due to more soda and energy drink alternatives? In the stock market, as in most aspects of life, cooler heads prevail. And those who can take advantage of panic can make a fortune.

Pricing pressure
The big concern is pricing pressure. As companies like Kroger (NYSE:KR), Costco, and Target (NYSE:TGT) make moves into natural and organic food, consumers looking for bargain prices might now opt to shop there instead. While this might matter, it's not reason enough to dump Whole Foods stock.

Pricing is an issue, but as long as the high-end consumer stays in play (which depends on the stock and real estate markets), Whole Foods will be fine. And while market crashes will certainly crush the stock, Whole Foods is a strong enough brand and underlying company to survive such unfortunate events. I'm sure you remember that this scenario has already played out.

Reasons not to panic
The primary reason the stock is down so much is because Whole Foods had raised its bar so high in the past. For instance, the fourth quarter's comps growth of 5.9% wasn't as impressive as the comps growth numbers from the first, second, and third quarters: 7.2%, 6.9%, and 7.1%, respectively. However, 5.9% comps growth is still solid. Sales increased 2.2% to $2.98 billion, which should be a positive, but the Street was looking for $3.04 billion. At least earnings beat by a penny, coming in at $0.32.

Another reason not to panic: Take a look at top-line growth for Whole Foods over the past five years: 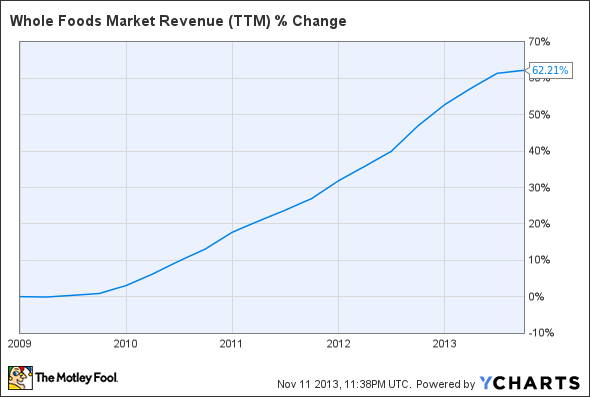 That's a long time, but notice that Whole Foods has consistently maintained its momentum. It's all an expectations game in the short term. But savvy long-term investors know to stick with strong underlying companies, and it will pay off later.

Whole Foods has also been consistent on the bottom line: 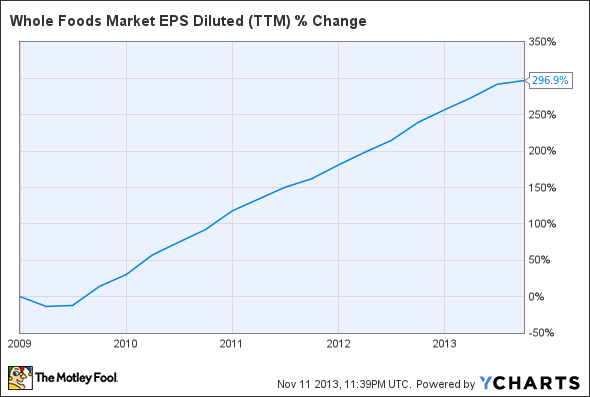 On-target
Target has been aggressive in natural and organic foods with its Simply Balanced brand. This brand's ingredients are more than 40% organic, with no hydrated oils, high-fructose corn syrup, synthetic colors, artificial preservatives, flavors, or sweeteners. Currently, most of these products aren't made with any genetically modified organisms. By 2014, none of these products will be made with GMOs.

Target will bring Simply Balanced to Canada next year, and it plans on increasing its overall organic food offerings by 25% through 2017. This is a positive for Target, but it doesn't need to be a major negative for Whole Foods. Another potential threat to Whole Foods is Kroger.

Kroger's growing exposure
Kroger might not be known for its natural and organic foods, but it's slowly growing in this area. Since Kroger is the second-largest supermarket chain in the United States, with a market cap north of $21 billion, there is plenty of potential for growth in this area.

Furthermore, Kroger recently purchased 212 Harris Teeter stores, the majority of which are located in affluent areas throughout the Southeast and mid-Atlantic states. This move demonstrates Kroger's intention to expand its geographic exposure.

At the moment, Kroger is just a potential threat to Whole Foods, but with 2,636 supermarkets throughout the United States (under various banners), Kroger has the capability to steal market share from Whole Foods in the future if it chooses to be more aggressive in natural and organic foods. Given the health-conscious consumer trend, this is a likely scenario.

The bottom line
Whole Foods is being hit hard, but this looks like an overreaction. The company isn't the safest investment in the world, since it relies heavily on the high-end consumer, which then relies heavily on stock and real estate investments. And even the most bullish Whole Foods investors won't deny that the company's uniqueness is fading. On the other hand, Whole Foods is still the most unique in its industry, and every company must deal with competition. Thanks to a strong, established brand with a loyal customer base, Whole Foods is likely to grow in the coming years.