The Organization of Oil Exporting Countries -- better known as OPEC -- has been a dominant player in the oil market since it was formed in 1960. The 12 member countries have provided over 40% of the world's oil over the last 20 years alone, giving them the ability to move prices up or down at a moment's notice.

Even a rise in U.S. oil production over the past eight years has barely made a dent in OPEC's global oil dominance. 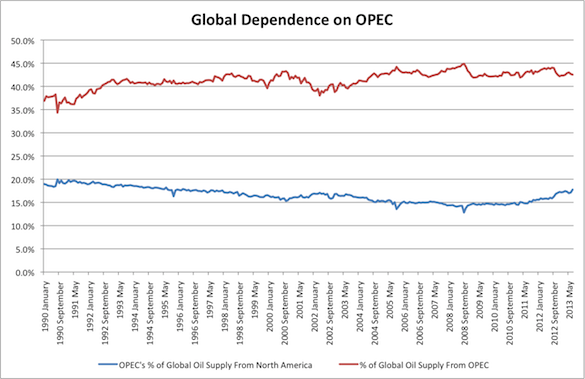 The question is whether or not OPEC's oil dominance is going to change in the future and who will be dependent long term? New fields are being found in deepwater and shale plays around the world, not the sands of the Middle East. Imperially, we've already seen OPEC's control on the oil market diminish in recent years. A decision to increase or decrease production no longer has a drastic impact on the price of oil. Goldman Sachs recently said OPEC's production will fall about 760,000 barrels per day from a year ago, about 2.3% of output.

Long term, the trends are working against OPEC. But are we still dependent on the oil cartel? The answer's not as simple as a yes or no, but it's becoming increasingly clear who is dependent on OPEC -- China and India.

Since then, not only has U.S. oil production increased 48.1%, consumption is down 9.5%. OPEC now supplies less than 20% of the oil consumed in the U.S., and that's falling at a rapid rate. 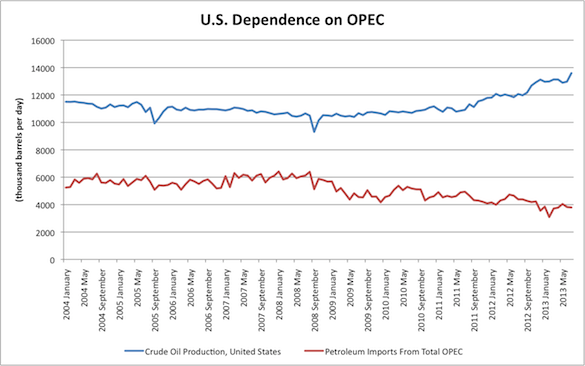 U.S. shale and deepwater offshore production doesn't appear to be slowing down, so the trends you see above will likely continue.

The world as a whole may need OPEC, but what's becoming increasingly clear is that the U.S. isn't the one whose economy is dependent on OPEC or foreign oil.

Who really needs OPEC?
If OPEC is producing an equal percentage of the world's oil but the U.S. is becoming less dependent on OPEC, where is the oil going? The answer is easy, the second biggest consumer of oil -- China.

China's economy is growing at breakneck speed and all of that growth requires oil. As China's middle class grows the country will need more oil, fueling growth in imports.

One of the challenges facing China is that it doesn't have a large supply of its own oil. Despite its size, China is only the fifth largest oil producer in the world behind Russia, Saudi Arabia, the U.S., and Iran. Its production was enough to export oil in 1995, but today it relies on the rest of the world for more than half its oil.

The other big importer in the emerging world is India, who isn't growing as fast as China but has even less oil of its own. 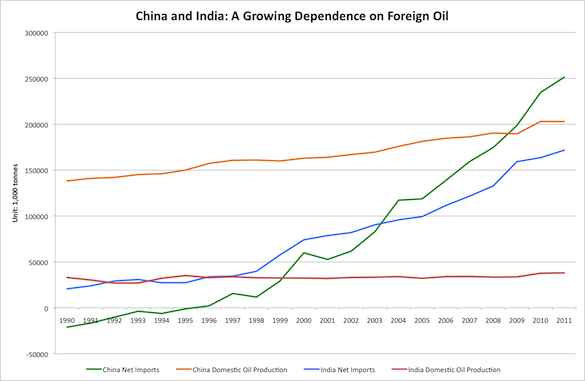 The chart above may be enough to explain why China has been supportive of Syria despite international sanctions. China needs Syria and OPEC and Russia just to keep its economic engine running.

What does this mean for investors?
One of the biggest trends to watch as countries fight over oil is happening offshore. Major oil reservoirs have been found off the coast of Brazil, Africa, and the U.S., just in the last few years. As the industry searches for more oil it will find more oil, reducing dependence on OPEC.

These deepwater finds -- as much as two miles under the ocean -- are expensive for explorers and right now the best way to play the industry is through rig owners. SeaDrill (NYSE:SDRL), Transocean (NYSE:RIG), and Noble (OTC:NEBLQ) are three of the largest ultra-deepwater rig owners, and they can rent out new vessels for up to $600,000 per day. Each company has a long line of rigs under construction, and as they come online over the next decade, we'll continue to see more oil finds outside of the Middle East.

Another problem with China and India's growing imports is that easy trade partners are countries like Iran, Syria, and Russia, not exactly a stable group of partners. As a result, they are trying to diversify oil demand away from these partners to countries a world away. That's kept tanker owners Frontline (NYSE:FRO) and Nordic American Tankers (NYSE:NAT) alive after U.S. imports fell off.

Tanker owners are struggling with a huge oversupply in the industry, but the light at the end of the tunnel comes from Chinese and Indian imports, not the U.S. That's a huge change from just a decade ago.

Foolish bottom line
Slowly, I think OPEC will lose its hold on oil production as new supplies are found around the world, but so far it's still a major player. In the U.S., we can take some comfort from the fact that our imports from OPEC are dropping rapidly and may vanish in another decade. China and India can't say the same thing.