Do you watch HGTV, Food Network, DIY Network, Cooking Channel, Travel Channel, or Great American Country? If so, then you're supporting Scripps Networks Interactive (NASDAQ:SNI). Before we get into some numbers and peer comparisons, ask yourself if the aforementioned brands are likely to remain in high demand. In my opinion, there will always be people interested in home and garden, food and cooking, do-it-yourself projects, traveling, and country music. However, that doesn't guarantee that Scripps Networks will be the No. 1 investment in television content. We'll have to see how Discovery Communications (NASDAQ:DISCA) and Viacom (NASDAQ:VIAB) measure up.

Recent performance
In the third quarter, Scripps Networks saw revenue jump 9% year over year to $617 million. Earnings per share also impressed, with a 12% increase to $0.87. Scripps Networks attributed its strong performance to the "tremendous popularity of lifestyle TV networks." That's the kind of statement you want to hear as an investor.

Scripps Networks' brands attract highly engaged and primarily upscale viewers. Advertisers are aware of this, which then leads to pricing power for Scripps Networks. In the third quarter, overall advertising revenue increased 8.7% to $410 million, and affiliate fee revenue improved 9% to $191 million.

Scripps Networks repurchased 46,000 shares in the third quarter. This isn't a lot, but that's a positive, since $647 million of a $1 billion repurchase program is still in play. Future buybacks will reduce share count and aid the bottom line.

Investing in nature, science, and more
Discovery Communications owns and operates nine TV stations, including Discovery Channel, TLC, and Animal Planet. It would be difficult to imagine a scenario in which demand for this kind of content would suddenly wane. Many people who watch these channels are very loyal to them; it seems as though Discovery Communications sells addictive content. This is borne out by the company's third-quarter numbers.

In the third quarter, revenue skyrocketed 28% to $1.37 billion, net income grew at a 24% clip to $255 million, and free cash flow improved 24% to $438 million. The key concept here is that continuously growing demand equals advertiser interest, which equals revenue growth. In fiscal 2013, Discovery Communications expects total revenue of $5.55 billion to $5.625 billion, and net income of $1.10 billion to $1.15 billion.

Prior to moving on to Viacom, let's see how Scripps Network and Discovery Communications compare in their top- and bottom-line performances over the past year. 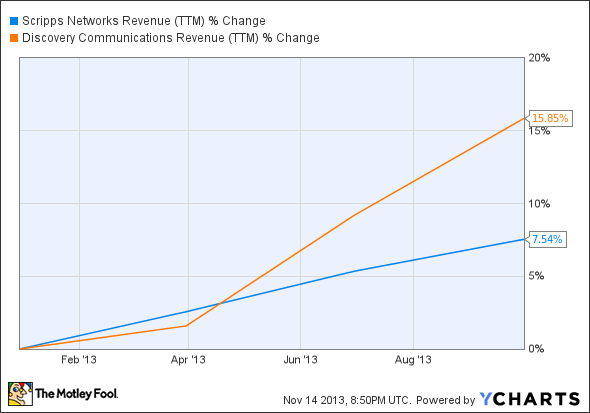 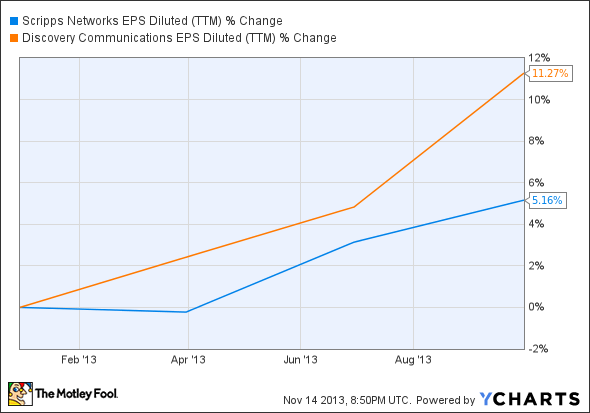 Both companies are impressive, but Discovery Communications stands out.

Targeting the cool crowd
Viacom operates in two segments: Media Networks and Filmed Entertainment. In regard to the former, it operates 200 TV channels, including MTV, VH1, CMT, BET, Nickelodeon, Comedy Central, and Spike. The trendy content these channels specialize in catches on quickly, and from an investing perspective, that's a positive for Viacom.

In the fourth quarter, Viacom's Media Network revenue increased 7% to $2.46 billion, thanks to improvements in both advertising revenue and affiliate fees. Ratings were up for Nickelodeon, MTV, Comedy Central, BET, and Spike. When ratings are up, advertising fees increase. This leads to revenue growth, which then leads to investor smiles.

Viacom's Filmed Entertainment revenue also jumped 11% to $1.21, which had a lot to do with World War Z.

Discovery Communications is the most expensive of the three. It's slightly leveraged, but this shouldn't matter thanks to the company's continuous growth and cash flow generation. Viacom offers a decent yield while trading at an appealing valuation. Scripps Networks is trading at the lowest forward multiple while sporting the highest profit margin and demonstrating quality debt management. The small yield doesn't hurt, either.

The bottom line
People love to watch television because it's an escape from a high-stress world. The difference between these companies is that they have different target audiences. All three companies have established strong brands that aren't likely to fade at any point in the near future. The biggest risk is a decline in the advertising market overall, but that's cyclical.

While all three companies are likely to reward shareholders over the long haul, Discovery Communications is growing the fastest on the top and bottom lines. Therefore, you might want to consider it first when doing your own research.