That's the current Mustang on the left, and the all-new 2015 Ford Mustang on the right. When you see them together, you realize they're quite different. Photo by the author.

Ford (NYSE:F) took the wraps off the all-new 2015 Ford Mustang on Thursday, unveiling its proud pony car in a series of events in cities around the world.

I was at the event in New York, and I was able to get up close with a pair of Ford's new Mustangs: a red fastback coupe and a silver convertible. I was also able to chat with several key Ford executives — including CEO Alan Mulally himself — and get insights into Ford's plan for its new pony.

By now, everyone who is interested in the new 2015 Mustang has seen the official photos Ford released on Thursday. But here are three things I can tell you about the new Mustang that might not be obvious from the photos and details that you've seen so far.

1. It's much better-looking in person
See that photo up at the top of the page? That's the current Mustang on the left, and the all-new model — the bright red one — on the right.

It's just a cell phone snapshot -- I arrived at the event early, and there it was -- but it gives a sense of what makes the new Mustang so striking in person. Compared to the current car, it's wider — and it looks quite a bit lower.

The new Mustang's chief engineer, Dave Pericak, told me that the roof on the fastback is 30 millimeters lower than that on the current Mustang coupe. That's just a little over an inch, but it makes a big difference in the car's "stance", as the designers call it.

And the shape of the front end is very well done. The nose slopes down to what Ford design chief Moray Callum calls the Mustang's "shark bite" grille. Yes, its shape is a riff on Ford's current pseudo-Aston-Martin corporate grille, but trust me — nobody is going to mistake this new Mustang for a two-door Fusion. (Or an Aston. Or anything else.)

Callum says that the front end's details, such as the shape of the headlight openings, were stretched horizontally to help emphasize the car's width. The overall impression is very striking, very assertive. It's new, but it's totally in keeping with the Mustang's character.

2. The interior is a solid step up, too
In premium trim, the current Mustang's interior is pretty nice. As with other recent Fords, the materials are mostly high-quality, the design is cohesive, and its executed to a high standard.

But the new Mustang looks like it'll be a substantial step up. The Mustang GT convertible we were looking at had lots of high-quality leather, an aircraft-inspired dash that honors Mustang tradition while remaining all-business, and plenty of thoughtful details, including a row of attractive metal-finished toggle switches.

At least in top-line trim, the new Mustang's interior should impress. Photos by Rex Moore, The Motley Fool.

When's the last time you saw toggle switches like these in a new car? They're retro, but also completely modern. Photo by Rex Moore, The Motley Fool

Ford has learned a lot since the current Mustang was launched way back in 2005 — and even since it was refreshed for the 2010 model year. One key lesson: Great interiors help sell cars.

And remember this point, which Mulally and his lieutenants hammered over and over: The new Mustang is a global Ford. It has to impress customers in places like Germany and China, where it will likely be cross-shopped against Audis and BMWs — not just Camaros and Challengers. The new Mustang's interior has to impress those folks, too.

From what I saw on Thursday, Ford hit the mark with the new Mustang's interior.

3. In one important way, the new Mustang isn't like other Fords
Ford has pushed hard to consolidate its model lineup on a much smaller set of "platforms" than in the past. A platform, in the auto business, is a set of common dimensions that allow different vehicles to share key parts (usually parts that aren't visible) and to be made on the same assembly lines.

All of Ford's platforms are expected to earn their global keep nowadays. A Ford spokesman told me on Friday that Ford's current plan is to build "virtually all" of its vehicles on just nine "global core platforms" by 2016. 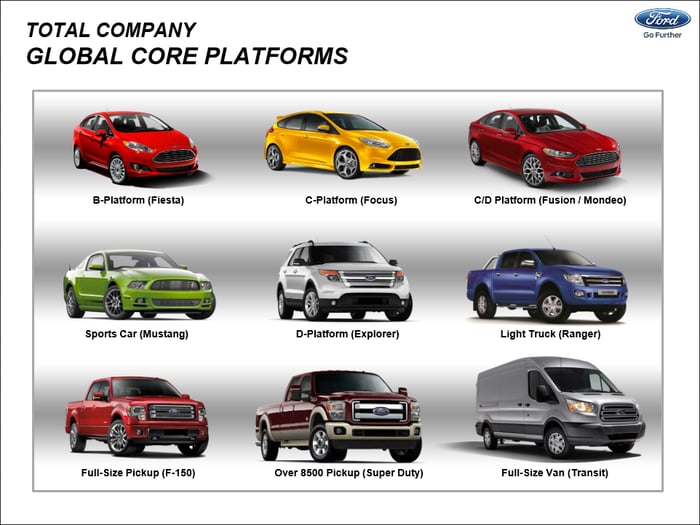 Ford's nine "global core platforms", from a presentation given earlier this year. (Yes, that's the current Mustang, not the new one). Source: Ford Motor Co.

Note that most of those platforms are shared among several models. The D-Platform, for instance, underpins the Explorer, the Flex, and the Taurus.

But — at least as of right now — the Mustang's new platform isn't shared with any other Ford model anywhere in the world. According to Pericak, it was developed and optimized specifically for the Mustang.

That doesn't mean that it won't be shared with future models at some point. But at least as of right now, the Mustang has a very special status in Ford's current global plan.