Direct selling companies have faced plenty of scrutiny and criticism lately. However, the business model can be very profitable for companies and their shareholders when sales are growing rapidly in a sustainable way. Nu Skin (NYSE:NUS) is firing on all cylinders, materially outgrowing competitors like Avon (NYSE:AVP), Herbalife (NYSE:HLF) and USANA (NYSE:USNA) thanks to its expansion into China. Can the company continue outperforming?

Nu Skin has been a remarkable success story in the direct selling industry over recent years. The company sells skin care and nutrition products in more than 50 countries and has compounded earnings-per-share growth at 39.3% per year in the last five years. It seems like there is no deceleration in sight; on the contrary, Nu Skin is doing better than ever thanks to booming growth in China recently.

The company delivered a blowout earnings report for the third quarter of 2013, with revenues jumping by 76% to a record $927.6 million and earnings per share growing at an impressive 107% year-over-year to $1.8 per share.

Nu Skin made nearly 50% of sales from China last quarter, and the region has been a big success for the company so far. Revenues in the greater China region increased by 240% to $464.6 million, while the sales leader count in the region grew by 250% during the quarter.

Gross margin increased to 89.4% of revenue versus 83.5% in the same quarter of 2012 and operating margins were also sensibly higher at 18.1% in comparison to 15.7% during the year-ago quarter. Low capital requirements coupled with operating leverage can be very profitable for shareholders in direct selling companies when sales are growing rapidly.

Due to this strong performance, management increased guidance for the remainder of 2013. Nu Skin expects the fourth quarter to be the first billion-dollar quarter in the company´s history, with revenues in the range of $1.02 billion to $1.05 billion and earnings per share between $1.85 and $1.90.

In addition to this, Nu Skin recently provided guidance for 2014, which positively surprised Wall Street analysts. The company is forecasting earnings per share between $7.25 and $7.50 for 2014 on sales between $3.9 billion and $4 billion for the year, this means a 22% to 25% increase in revenue versus 2013. Analysts, on average, were expecting a net gain of $6.66 per share on $3.62 billion in revenue.

One of a kind
When comparing growth rates for Nu Skin versus other direct selling companies like Avon, Herbalife and USANA, the company comes ahead of the competition for a wide margin in terms of earnings-per-share growth during the last five years. 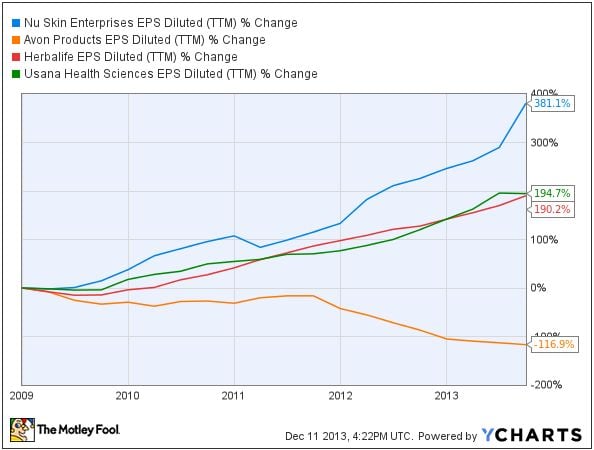 The growth gap between Nu Skin and the competition is getting wider lately, even if the company trades at a premium valuation versus its peers, such premium can be easily justified considering its superior growth rates.

Can it continue?
China has been a big growth driver for Nu Skin, and both China in particular and Asia in general will likely be crucial for the company in the future. This has some risky implications for investors but, if the company can continue gaining popularity in those markets, then Nu Skin has plenty of potential for growth. 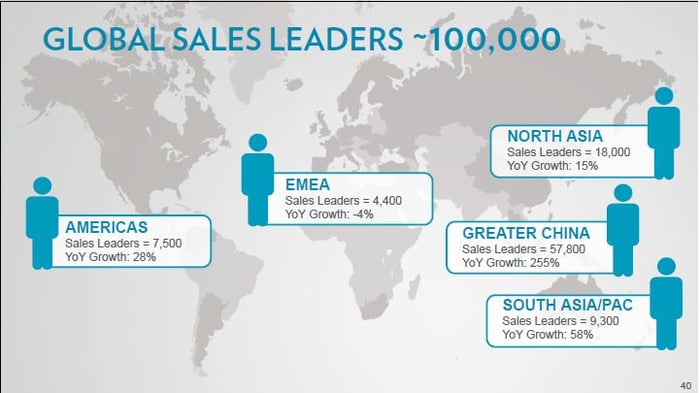 According to management, quoting a study by Nielsen using data provided by Nu Skin, the company has been gaining staying power in China as a growing proportion of sales come from repeat purchases in the country. It´s hard to tell how those important variables will evolve in the middle term, but overall sales are clearly moving in the right direction. 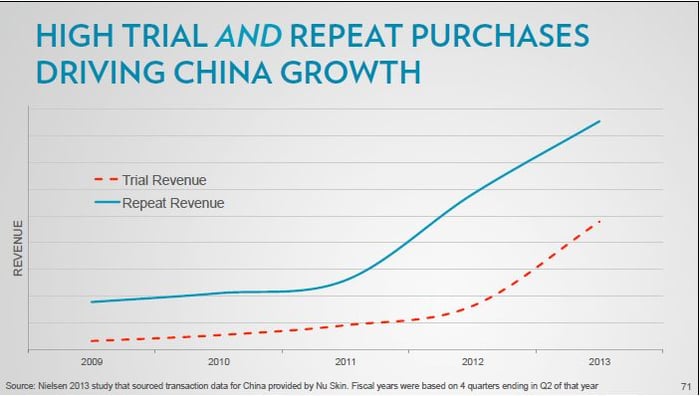 Bottom line
The direct marketing business model is particularly risky and hard to analyze. Especially when it comes to Nu Skin, which has been rapidly expanding into China, investors need to carefully evaluate the risks before making investment decisions in the sector. On the other hand, the company seems to be firing on all cylinders, if it can genuinely sustain this kind of performance in the coming years, Nu Skin could deliver substantial gains for shareholders.