It was another terrible year for the coal industry in 2013, whether you were producing thermal or metallurgical coal. Supply continues to outstrip demand, pushing prices lower and virtually eliminating profits in the industry.

As financial conditions deteriorated, so did the stocks of some of the industry's top coal producers. Arch Coal (NYSE: ACI), Peabody Energy (OTC:BTU), Alpha Natural Resources (NYSE: ANR), and Walter Energy (OTC:WLTGQ) all lost more than a quarter of their value in 2013. 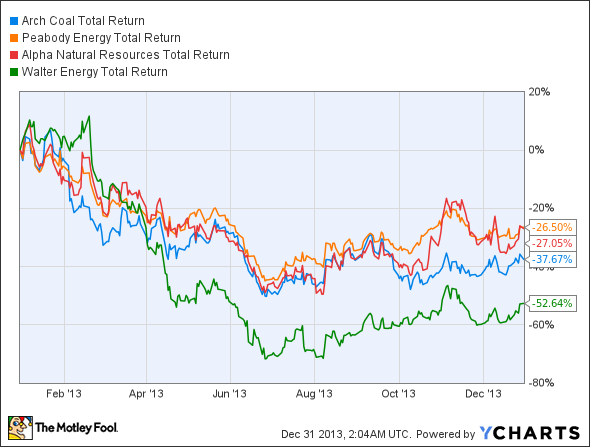 So, will 2014 be any better for the coal industry?

What coal needs in 2014
Unless companies start going bankrupt or shutting down mines, demand for coal needs to increase for the bottom line to get better. Peabody Energy recently said it expects 75 GW of new coal generation to come online in 2013 and global demand to increase 1.2 billion metric tons by 2017. Even the U.S. market, which has been besieged by natural gas, has seen a 35 million ton increase in demand so far this year.

The problem is that even increases in production from Walter Energy and Arch Coal haven't resulted in improving financials. In 2014, the industry needs to see a sharp increase in demand from not only China and India, but also the United States. That's where I have a hard time seeing a big improvement.

On the metallurgical side, a construction boom in China will likely slow over the next few years, and I could see a bubble burst resulting in rapidly falling demand for steel. The U.S. and Europe aren't exactly growing infrastructure spending right now, so if China can't hold up demand we're in for weak prices globally for the foreseeable future.

Fighting long-term trends
Pointing to new power plant construction is great, but there are also a lot of coal plants coming offline around the world. The coal industry is fighting increased environmental regulations and even a new understanding of the environmental impact of pollution in China. Domestically, since 2010, the retirements of more than 150 coal plants have been announced, and with natural gas continuing to be an inexpensive alternative, I don't think the trend will slow.

China is still building coal plants at a rapid pace, but with pollution clouding many of the country's most densely populated cities, China has put an emphasis on wind and solar power generation for the future. China may increase demand in the next few years, but it's going to have to replace demand in the U.S., and China doesn't like importing energy long-term. That poses a challenge for coal demand in 2014.

Foolish bottom line
The global trends just aren't in the coal industry's favor, and with most companies already losing money, it's an industry I would avoid altogether. It's better to go with emerging energy trends rather than fighting them.