Dexcom was the first in this series and I outlined the key reasons behind its doubling in an article last week. Today, I dig into the second stock in this series, Cardiovascular Systems, (NASDAQ:CSII) a maker of systems used in treating narrowing arteries in the leg. Excitement over the company's latest generation devices helped drive shares up more than 150% last year. 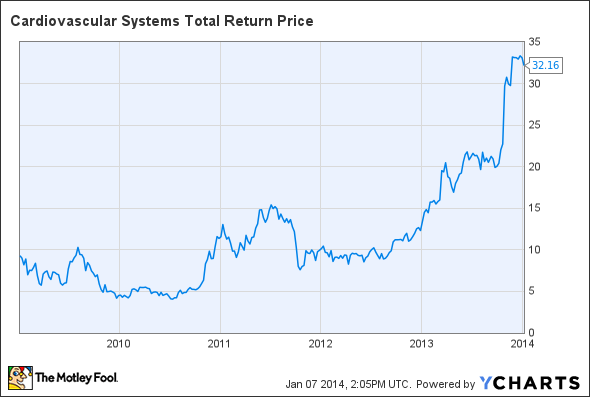 An opportunity opens in treating PAD
Cardiovascular Systems has been around since 1989, but it wasn't until it launched its latest generation of systems for peripheral artery disease, or PAD, that investors really took notice.

The devices help surgeons more effectively treat the build up of plaque in leg arteries. A lack of blood flow means patients suffer pain when walking, significantly affecting the patient's quality of life. Patients can successfully improve their condition by quitting smoking, eating better, and exercising, but for those with more advanced cases surgery is likely.

In those cases, a common approach is angioplasty, a procedure in which a catheter is used to reach the blockage in the artery and a balloon attached to the catheter is inflated to flatten the blockage. Sometimes a bare metal, coated, or drug eluting stent is also inserted to help keep the artery open.

Those catheters and stents are sold by big medical device players like Abbott (NYSE: ABT) and Johnson & Johnson's Cordis (NYSE:JNJ) and Medtronic (NYSE:MDT).

Abbott bolstered its position in PAD stents with the acquisition of Idev last July and has about a quarter of the broader vascular market, according to Trefis. Idev's Supera Veritas stent system has been sold in the EU since 2010 and the company has filed for FDA approval for use in the main artery of the thigh.

And J&J's Cordis bought PAD stent developer Flexible Stenting Solutions in March, 2013. That deal boosted Cordis PAD product line, including the S.M.A.R.T. stent, which has received the FDA nod for use in arteries both above and at the knee.

Not to be left out, Medtronic won FDA approval in September for use of its Complete SE stent in those two arteries too.  Medtronic is also studying the use of a drug-eluting balloon in PAD procedures.

The interest in building up product lines addressing PAD is tied to its widespread prevalence. The risk of developing PAD climbs steadily through your 50s, 60s, and 70s, and more than 25% of men older than age 80 develop the condition. Overall, PAD affects 12% to 20% of Americans over the age of 65 and as many as 200 million people worldwide.

Spinning its way to success
Cardiovascular's 360 PAD devices help reduce the inflation pressure of balloons used in angioplasty by removing more of the calcium buildup along the vascular wall. That calcium buildup occurs in between 60% and 80% of all PAD patients. The device removes the calcium by using an orbital spin to break the buildup down into particles smaller than blood cells.

The approach has been used to treat above and below the knee buildup in more than 3,700 patients during clinical trials and more than 125.000 devices have been sold since winning approval from the FDA in 2007. That number is expected to climb following an approval for the use of the company's orbital approach in coronary arteries last October.  It's estimated that calcium buildup occurs in about 40% of patients undergoing coronary angioplasty.

Since estimates peg the coronary procedure market at $1.5 billion a year, investors appear willing to accept dilution.  To advance the device's use in coronary patients, the company raised nearly $85 million in a public stock offering in November.

The coronary market opportunity could prove significant given the company's sales, which climbed 28% year-over-year, were just $29.8 million last quarter. Cardiovascular expects sales in its fiscal second quarter ending December to grow 19% to 22% to $31 million.

Fool-worthy final thoughts
Trial costs and pre-coronary launch expenses pushed the company to a $7 million loss last quarter and the company is guiding for a loss of $9 million in fiscal Q2. But margins are healthy at 77%, suggesting uptake in the coronary indication may present profit opportunity over the coming years as higher unit volume is leveraged against fixed costs. Since the coronary indication could be so significant to the company's quest for profit, investors should keep a close eye on the company to see if the device gains traction for the indication this year.