Forget what you've heard, the argument over Bitcoin's viability is not new. It's an old debate between economists over the nature of money.

Over the past year, pretty much all consumers of financial journalism have been inundated with an endless stream of opinions on the viability of Bitcoin. It's a wearying task for non-journalists to sort through the heap of formulaic bull and bear pitches just to hone in on an honest argument. But rest assured, clarity can be found. Before I get to my thoughts on the subject, here are both sides of the debate summed up as clearly as I could manage:

In favor
Bitcoin fans use a variation of these three arguments:

1. Transaction use - Digital currencies allow people and businesses to make payments cheaper and quicker than with traditional money. Without the hassle of bank fees and processing times, we essentially cut out the middle men of finance and smooth out those wrinkles in the decision-making process.

2. No inflation - The supply of money is limited. There is no central authority and no printing press, making the currency "inflation proof."

As more vendors accept Bitcoin to save on transaction costs, so too will demand for the currency rise.

Not in favor
Dissenting arguments in the Bitcoin debate tend to be a bit more muddled. Nobel Laureate Robert Shiller once said, "A bubble is a time of expected future dramatic price increases that is brought on by psychological extrapolation of past price increases." In many ways, this has become central to the Bitcoin story. It's tough to see that a $1,000-valuation of Bitcoin (at the time of writing this article) is based on real expected demand for transaction use, because that would require near universal adoption of Bitcoin.

For example, like many other successful entrepreneurs with Libertarian sympathies, Richard Branson is on the Bitcoin train. Branson's space exploration company, Virgin Galactic, is now accepting the digital currency as payment, but what happens next? Will Virgin Galactic pay their fuel costs with Bitcoin? Or funnel it to suppliers who also accept Bitcoins? In order for that to work, those suppliers would need to pay their employees in Bitcoins, who would have to pay their taxes in Bitcoin. In economics, we call it a medium of exchange. A currency is only useful when it can be exchanged for other goods or services.

But let's just assume that somewhere down the road Bitcoin does become a successful medium of exchange. It would effectively account for its huge gains in 2013, but it also means that the growth is already priced in. As much as investors would like to believe it, nothing goes up forever. So if we believe that a new payments system can eventually seduce a majority of firms and that explains why it grew 6,000% in one year, it's logically inconsistent to believe that price will continue to rise.

My thoughts
Contrary to popular belief, the debate about Bitcoin's viability is not new. It's really just an old argument between economists over the nature of money.

For decades, economists from two rival schools of thought have disputed the nature that money plays in an economic system. Those in favor of Bitcoin believe that recessions, stock market crashes, inflation, deflation, unemployment, vampires, zombies -- basically anything bad -- is the product of poor mismanagement of the money supply. Libertarians who rail against the Federal Reserve have their intellectual roots in Milton Friedman, who once said "Inflation is always and everywhere a monetary phenomenon." It's true that unrestrained printing of more money has induced hyperinflation by diluting the value of that currency (see Austria post WWI), but that's not a slam dunk case.

Knowing that a link exists between changes in the money supply and the real economy – unemployment, inflation, interest rates – is crucial to understanding why Bitcoin is doomed as a currency. I mean, 2008 showed us how real stock market bubbles can be, but the effects can be softened through smart central banking. If you disagree, just look at the difference in post-crisis recoveries of the US and the UK. 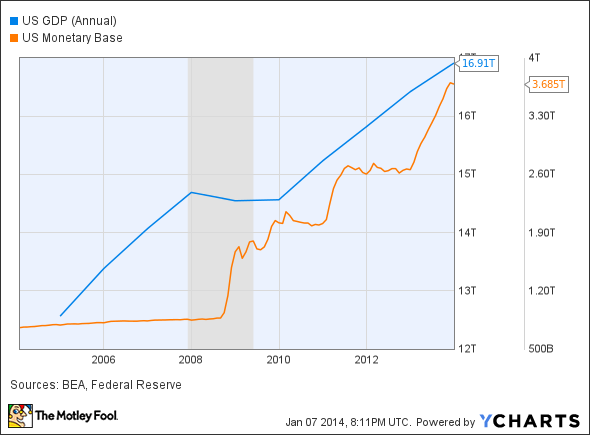 US GDP data by YCharts 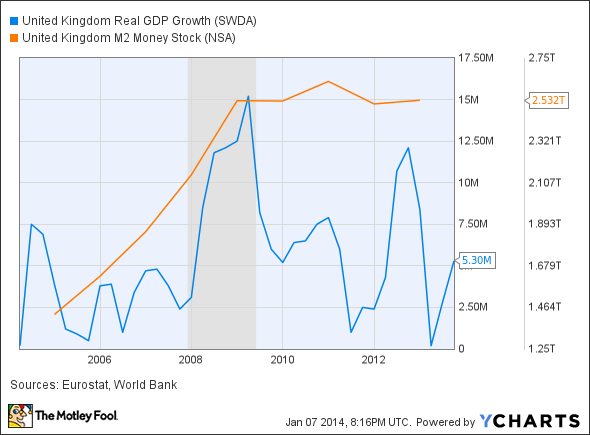 The Federal Reserve embarked on a quantitative easing program that vastly expanded the supply of money in the United States; Britain's central bank did not. As a result, GDP growth bounced back quicker on this side of the pond. Now all this is by way of saying that good central banking is key to good governance, and it becomes pretty toothless with a fixed money supply.

The Foolish bottom line
Assume that Bitcoin is compelling enough to become a universal payments system. That in itself is crazy, but just assume it's true. Ignore all the familiar signs of a bubble waiting to burst. The part where you run in to trouble is getting governments to accept tax revenue as Bitcoin, because it undermines the national currency, making monetary policy irrelevant. And why would a country do that exactly? Why would they surrender the ability to heal their economy? Sorry to all the believers, but it's a Libertarian pipe dream that makes absolutely no sense.