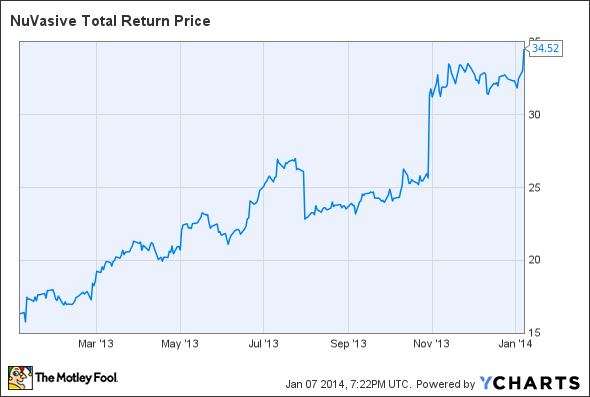 Most of us will suffer back pain at some point in our life. But in the majority of cases all that will be required will be some rest and physical therapy. However surgery may be the best option for those with degenerative back disease, and it's those tough-to-fix cases that account for 75% of NuVasive's sales.

A smaller insured population and less discretionary money due to recession era job losses reduced demand for spinal procedures over the past five years. However, NuVasive's focus on minimally invasive spinal fusion surgery, a quick-growing approach that more specifically targets the treatment area, offers faster post-surgery recovery time, and comes with fewer post-op complications, has helped insulate it from the worst of the slowdown. Signs in the form of rising employment and expanding insurance coverage tied to reform suggest the worst in terms of procedure demand may be behind the industry. That has industry watchers forecasting demand for global spine surgery devices will climb 4% compounded annually to $8.7 billion in 2018.

The lion's share of those sales will be captured by industry leaders Medtronic, which has 36% share, and Stryker, which holds 9% share. However, Nuvasive hopes it can chip away sales from them, building its market share to double digits and maintaining its lead on Zimmer, which controls just 3% of the market.

An uphill battle for profit growth

Despite a mammoth run last year, NuVasive investors are still paying less for every dollar of the company's sales than they are for the company's competitors. Investor's hesitancy to overpay for revenue stems from NuVasive's challenges in translating sales into profit.

Although NuVasive is growing its top line by double digits rates, including 14% year-over-year to $169 million during the third quarter of 2013, earnings have struggled to keep pace. The company's operating margin, a key metric for measuring management's ability to turn a profit, significantly trails NuVasive's more diversified adversaries. 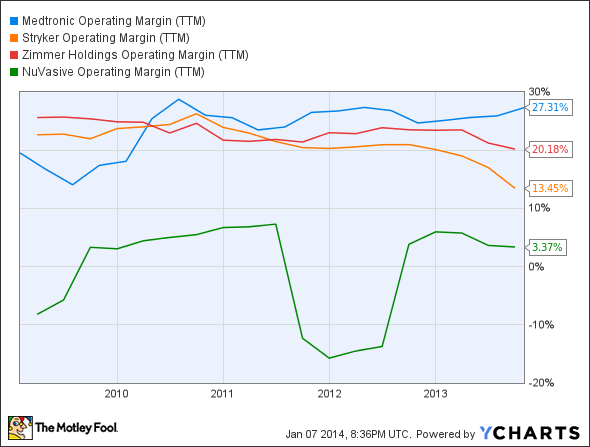 That profit gap blunts some investor enthusiasm for NuVasive by distracting attention from its successes, including dramatic overseas growth. Thanks to international product launches sales jumped 30% from last year during the third quarter. More launches over the next few years in key markets including Asia are expected to boost the percentage of sales generated outside the U.S. from 10% today to 20% over time.

Historically, spinal procedures were conducted by entering the body from the heavily muscled front or back, resulting in longer post-operative recovery time and often resulted in complications requiring readmission. NuVasive's lateral entry approach, which enters through the patient's side, offers a more compelling solution given faster recoveries and lower readmissions. That has the company projecting the number of minimally invasive spine surgeries will climb from 25% of all spine procedures this year to 80% by 2021.

If so, NuVasive predicts its sales will eclipse $1 Billion in the coming years as its market share climbs above 10%. That volume and sales growth should help NuVasive deliver more of those elusive earnings. As a result, NuVasive is modeling for an increase in its non-GAAP operating margin into the low 20% range from its current mid teens rate. If the company can deliver on that promise, investors may find they're rewarded with faster than expected earnings growth.