Despite a very positive tone from management, Monsanto's first-quarter results left much to be desired

Editor's note: A previous version of this article incorrectly stated Honey Nut Cheerios would be GMO free, but only original Cheerios will be stripped of all genetically modified organisms. The Motley Fool regrets the error.

Monsanto (MON) reported first quarter results last Wednesday, and I'd almost characterize the press release as "triumphant". Despite certain setbacks, Monsanto posted a second consecutive quarter of record cash from operations, and reiterated its $5.00 to $5.20 per share guidance for fiscal 2014. However, digging a little deeper reveals a few problems investors shouldn't overlook.

An expensive mop
Management specifically referred to a "second consecutive quarter of record cash for share repurchases". It's interesting that the emphasis was on share repurchases, as the current round of share repurchases is authorized for $2 billion, but that should be taken with a grain of salt. Despite hundreds of millions spent on share repurchases over the last several years, actual shares outstanding has stayed roughly the same, declining less than 5 percent in the last ten years. These buybacks have done little more than absorb share dilution. 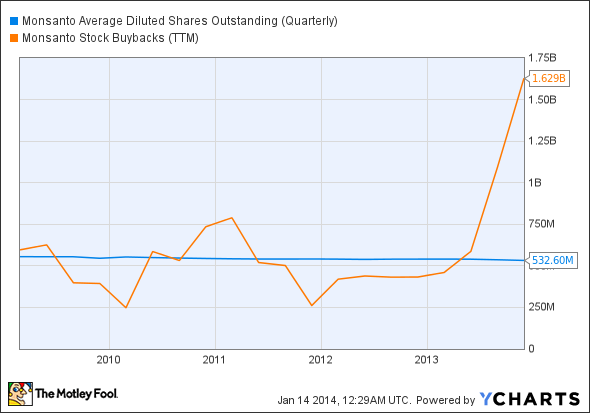 A better use of that record cash from operations would be to increase the paltry dividend, which currently yields just 1.4 percent.

A better quarter than the competition's
Another quirk worth noting is where Monsanto's sales and income growth came from this quarter. The Seeds and Genomics segment, which accounted for 70 percent of sales in 2013, declined 5 percent this quarter. This was offset by incredible growth in the Agricultural Productivity segment, due largely to price increases.

Fellow Fool Stephen D. Simpson is troubled by the decline in Seeds and Genomics, but it's not surprising. Corn seeds are Monsanto's single biggest product by far, and the price of corn has fallen almost 40 percent over the last year from near record highs -- it makes sense that farmers would be buying and planting fewer seeds. Dow Chemical (DOW) also saw its seeds segment decline in its most recent quarter, and Syngenta (NYSE: SYT) was even forced to pre-emptively write down the value of its corn seeds inventory in excess of estimated sales.

The fact that Monsanto was able to successfully lean on its other products this quarter should be seen as a strength of the business rather than a weakness, especially given the highly synergistic relationship between Monsanto's agricultural productivity products and its seeds, which are specially designed to tolerate said products. However, Monsanto also acquired The Climate Corporation this quarter, a company which uses weather data to provide crop insurance to farmers. This isn't exactly unrelated to the core business, but it's certainly tangential, and it will be interesting to see whether it pays off for the company.

Can't forget about controversy
A discussion of Monsanto never feels complete without touching on the political climate. Despite essentially no scientific evidence that genetically modified organisms (GMOs) are unhealthy, General Mills (GIS 0.14%)recently became the latest company to bow to consumer pressure to remove them from some of its products. The company announced that original Cheerios would now be GMO free. While other flavors like Honey Nut aren't affected, that may change down the road. Honey Nut Cheerios and regular Cheerios are the No. 1 and 4 cereal brands in America, representing almost a billion dollars in sales, not to mention the other various Cheerios products.

As my colleague Brian Stoffel notes, Monsanto CEO Hugh Grant (not the actor) was quick to downplay the situation by pointing out that Cheerios are already made from GMO-free oats, but corn starch and sugar are the next two top ingredients.

While Cheerios' corn and sugar needs are probably not a significant source of revenue for seed companies like Monsanto, Dow, or Syngenta, General Mills is a prominent company whose product decisions can make waves in the food industry. The Cheerios decision echoes Whole Foods' decision last year to require GMO labeling on every product it sells, an ambitious project it plans to complete by 2018. These kinds of moves are great PR, but don't do much good for Monsanto or its peers, despite CEO Grant's diplomatic assurances that he's glad for the debate.

The Foolish bottom line
Despite record first quarter cash from operations, this wasn't as clear of a win for Monsanto as management might make it seem. While it's good that earnings per share isn't being whittled away by a runaway denominator, shareholders would be better served by a larger dividend than buybacks that just mop up share dilution.

Going forward, The Climate Corporation acquisition may be Monsanto's effort to use stable insurance profits to level out the rest of the business in the face of erratic crop prices and the ever-present threat of GMO-banning.