Rooftop solar companies like SolarCity Corporation (NASDAQ:SCTY.DL) did well in 2013 -- too well. Massive utilities have the spooks, and they're pushing regulators to put the brakes on backyard power generation. Here's what you need to know.

In an interview with GreenTech Media, Federal Energy Regulatory (FERC) Chairman Jon Wellinghoff predicted solar is "going to overtake everything ... it could double every two years."

A quick glance at SolarCity's latest numbers confirms Wellinghoff's thoughts about the industry. SolarCity doubled its megawatts deployed for Q3 2013 compared to Q3 2012, with residential systems up 150%. And estimates for 2014 growth have SolarCity set for its strongest growth yet. 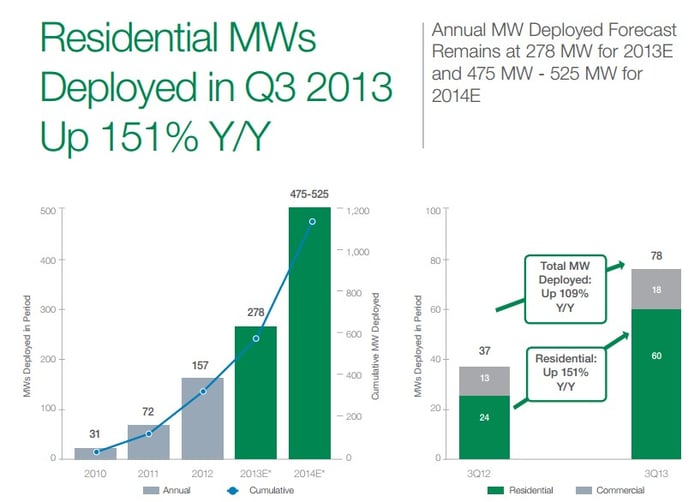 Utilities fight back
Utilities are intimidated, if not scared, by SolarCity's recent success. These century-old stalwarts are seeing their sector shaken up like nothing ever before -- much the same as traditional telecoms reeled to adopt to mobile-phone services. Collectively, with over a trillion dollar market capitalization, utilities may seem unstoppable, but who would've thought U.S. landline use would drop more than 25% in 15 years?

With strong regulatory relationships, several utilities have taken the offensive against solar companies. Yale's environment360 publication reports that Pinnacle West's (NYSE:PNW) Arizona Public Service Utility and Xcel Energy (NASDAQ:XEL) have both requested states to cut back on customer incentives to install solar -- or even to levy charges against rooftop solar users. Based in Arizona and Colorado, respectively, Pinnacle West and Xcel Energy assert that rooftop solar users get all the benefit of hooking up to a reliable electricity grid without paying their fair share of upkeep costs.

The argument is complicated, and not all utilities are waging war. Power companies can gain state-mandated renewable energy credits from buying solar back from customers, and decentralized grids reduce system stress and diversify risk. Dominion Resources (NYSE:D) is leasing roof space from Virginia businesses to research its potential benefits. Last month, Dominion Resources announced it will spend $2 million to install 2,000 panels on the rooftop of a local Canon facility.

Is SolarCity screwed?
Solar is here to stay. Residential systems are rolling out faster than ever, and utility-grade solar facilities are predicted to be cost-competitive with natural gas by 2025. SolarCity and other rooftop solar installers will hit a fair number of snags along the way, but worries over grid upkeep will not kill solar power's potential.

While some utilities are pushing back, the smartest ones are finding ways to work with (and profit from) decentralized systems with thousands of power producers. Keep progressive picks in your own energy portfolio, and you'll be set to pull long-term profit.