A big tragedy has struck Indian automaker Tata Motors (NYSE:TTM) – its managing director, Karl Slym, met an untimely death by falling out of a hotel window in Bangkok. This has shocked the industry, and sounded alarm bells to investors who were hoping for a turnaround in the company's struggling domestic business. Although Tata Motors is a household name in India, it's currently finding it difficult to cope with falling demand and increasing competitive pressure.

Slym joined Tata Motors in 2012, and was heading the Indian operations other than the Jaguar Land Rover business that the company acquired from Ford (NYSE:F) in 2008. His death not only creates a leadership vacuum, but also brings his several initiatives to revive the company's fortunes to a sudden halt. It will take no less than six months to find Slym's successor – how costly will this gap prove to be for Tata Motors?

Dwindling sales
Tata Motors, India's fourth-largest auto company, is going through a rough patch. Between April and December 2013, or the first three quarters of the current fiscal year, sales of Tata-brand passenger vehicles declined 37% in India. 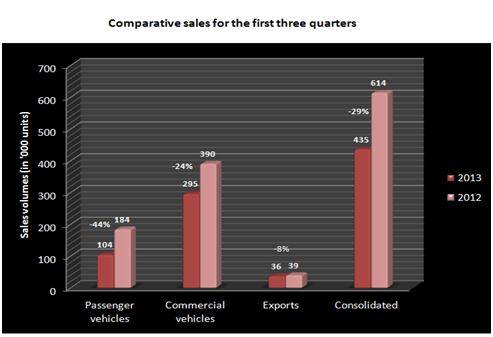 Nano initiatives could suffer
Tata Motors had launched the Nano in 2009 with hopes of providing a viable alternative to two-wheelers, which comprise 77% of the Indian vehicle market. Sadly the promotion campaigns were big failures, and the reported cases of engines bursting into flame did a lot to spark negative publicity for the car. The company's monthly target of selling 20,000 cars has remained elusive.

In 2011 and 2012, Tata Motors tried to boost volumes by pressuring dealers, and there were some big sales months when volumes exceeded 10,000 units. But, Slym wanted a permanent solution and conceptualized different variants of the Nano in the $2,500-$5,200 range, addressing various market needs. He wanted to do away with Nano's "cheapest car in the word" image, and position it as the "Smart City Car", targeting a younger buyer demographic.

Under his leadership Tata Motors rolled out the compressed natural gas version of the car in 2013. But his efforts have yet to yield results. In the last nine months, the company managed to sell just 13,391 units – down 72% from the previous year.

Tata Motors also recently launched the Nano Twist priced at approximately $3,800. The car comes with electric power steering, better interiors, and features that include remote keyless entry, two glove boxes, and music system with Bluetooth. Another model with a one-liter engine is slated for a launch later in the year. The Indian automaker may find it difficult to drive these initiatives in Slym's absence.

Fate of new product launches uncertain
Tata Motors' biggest problem has been the lack of new products. The last time the company launched a new car was way back in 2010 when it rolled out the Aria, a multi-seat premium utility vehicle.

Slym wanted to put an end to this long lag and had therefore lined up two big releases this year – a hatchback and a compact sedan. Both of the cars will make their debuts at the Indian auto show in February, and are scheduled to be in showrooms later in the year. Tata Motors was planning to bring out new vehicles every year till the end of the decade, a feat that could prove to be challenging for the automaker.

The implications of Slym's unexpected death don't end here. Competition has remained a major concern for Tata as rival players continue to eat up its market share.

Competitors could get an edge
In the period from April to December 2013, sales of passenger vehicles declined 5.72%, and those of commercial vehicles dipped 18.38%, in India. But the weakened state of these sectors has not deterred automakers from across the world to target this emerging market. The current population of India is over 1 billion, while the car ownership rate stands at less than 100 per 1,000 residents. This indicates that there is a huge market which remains untapped.

Ford is hopeful about the industry's prospects – especially in the compact segment where it expects 2 million vehicle sales by 2018. The American automaker plans to unveil its new global compact concept at the Indian auto show. Last year Ford had launched its compact SUV, the EcoSport, which is a big hit. The Renault-Nissan (OTC:NSANY) alliance also wants to increase its presence, and gain hopes to gain 10% market share in India. Nissan's Datsun Go hatchback will be in Indian showrooms soon, followed by more launches by Renault and Nissan through the year.

Last thoughts
With Slym's passing, Tata Motors risks losing its direction in the face of the challenges confronting it. While it's too early to predict the extent of the effects, the consequences of Slym's death could weigh heavily on Tata Motors' – and its investors – future prospects.