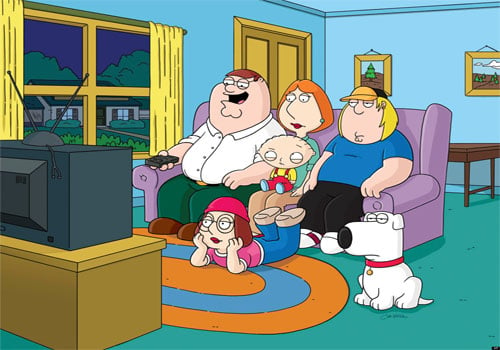 The most coveted time period on TV has unquestionably become the post-Super Bowl time slot. Over the past two decades, it's seen everything from established series to promising new ones, each time drawing a huge crowd. In 1999, Fox (a subsidiary of News Corp (NASDAQ:NWS)) gave its post-Super Bowl bump to a pair of animated shows -- one a fan favorite and the other a promising up-and-comer titled Family Guy. Fifteen years and one amazing story later, the show has grown into a proven money-making empire that still hits a chord with audiences.

Let's backtrack. Family Guy started off like any other show. It was a simple premise about a dim but (mostly) well-meaning family man with a wife, two kids, a baby hell-bent on world domination, and an alcoholic dog who could talk.... OK, so maybe it wasn't like any other show. Regardless, it was still insanely funny, and with the benefit of a Super Bowl-themed episode of The Simpsons airing ahead of it, the show got sampled by over 22 million people.

Of course, tons of people watching an episode of your show is no guarantee they'll continue to tune in, and that's what happened to Family Guy. In fact, the series holds the dubious honor of being cancelled on TWO separate occasions. But the fans wouldn't let it go. The show's small but extremely loyal audience rallied behind it, watching reruns on Cartoon Network and buying DVDs in record numbers. Eventually the network realized the show may not have the largest audience, but it was the right audience.

The 18-49 demographic were in love with Peter Griffin and his family and they had no problem spending money to see more of them. Unlike other networks, Fox actually listened to its audience. Even today, that's still somewhat of a foreign concept.

So how did Family Guy work its magic?

It began with a unique deal with Cartoon Network. Under the terms, the show's 50 produced episodes would essentially be free in exchange for promotion of the DVDs, and then the network would pay an extremely low cost after a set period of time. The gamble worked and those airings, paired with rising home entertainment sales, proved to be a profitable combination. (The first set of 28 episodes sold 2.8 million in 2003.)

However the show wasn't content as just a TV show. Creator Seth MacFarlane had grander plans to make the series even more of a pop culture force. In 2007, with the blessing of George Lucas, Family Guy created what would be the first of three spoofs of the original Star Wars trilogy. Known as the "Blue Harvest" trilogy, the hour-long episodes were initially released solely on DVD and, not surprisingly, they sold very well.

In the years since, the series has continued to thrive with a strong consumer products program that's yielded apparel, action figures, video games, and, of course, more DVDs. It also has dominated in syndication with constant airings on Cartoon Network, TBS, and Tribune Media networks across the country, and all at a price now vastly inflated from when its reruns first hit the airways. MacFarlane and his crew could have easily rested on their laurels, but they take great pride in the series and even greater pride in pushing the envelope.

Last November, the series shockingly killed off Brian, the Griffin's lovable dog. The outcry was deafening. If you had any question if Family Guy fans were still watching, those questions quickly disappeared. The public laid into MacFarlane, who seemed genuinely surprised the fans had so much passion for an animated character. Audiences were even more enraged when MacFarlane seemed apathetic to the matter, but ultimately he knew something viewers didn't ... just a few weeks later, Brian came back and things returned to normal. Of course, on a show where one of the characters has his own time machine, it wasn't entirely a surprise the beloved pooch would rejoin the living.

Brian aside, the series has always pushed the limits as MacFarlane, who is also a talented singer, occasionally adds satirical songs into many episodes that touch on a number of hot topics.

Knowing all of this, it came as a surprise when the Academy Awards asked him to host their ceremony in 2013. When MacFarlane took to the stage to perform a song called "We Saw Your Boobs," the public seemed surprised.... MacFarlane's fans were not. This is a man who created a movie about a pot-smoking, hard-drinking, foul-mouth teddy bear named Ted and saw it gross $500 million worldwide. He knows how to find humor in odd situations.

People don't always give MacFarlane a lot of credit for what he's accomplished with Family Guy and his arsenal of other projects. However, Fox certainly knows what a talent he is ... at least now. The man has had a huge impact on the company's bottom line. MacFarlane not only produces Family Guy, but he also is behind spin-off series The Cleveland Show and American Dad. While both shows are now ending their run on Fox, they were both big successes for the network. (Dad will move to TBS this year and characters from Cleveland will be spun back in to Family Guy).

MacFarlane is also an executive producer on the network's Dads, which (of course) has been assaulted by critics for its low-brow humor. He's also working with Fox to relaunch Carl Sagan's Cosmos with famed astrophysicist Neil deGrasse Tyson and eventually will help reboot Hanna-Barbara gem The Flintstones. In other words, Fox will never doubt the man again (especially after missing out on Ted and opening the door for Universal to swoop in).

It's fitting that MacFarlane is attached to The Flintstones reboot. Not only was working for Hanna-Barbara productions one of his first jobs, but Family Guy is the only series since The Flintstones to earn an Emmy nomination for "Best Comedy Series." As if you needed any more proof of the show's success.

Family Guy has proven itself to be a truly unique success story, and in this age of binge-watching and time-shifting, it could be the last of its kind. Networks today are trigger-happy when it comes to canceling shows, and as a result their viewers are gun-shy about picking up new ones. Family Guy bucked the trend as a show thanks to Fox bucking a few trends as a network. In fact, as the show prepares to celebrate its 15th anniversary this weekend, it's clear this eventually became a symbiotic relationship.

As Peter once said, "Oh my god, Brian, there's a message in my Alphabits. It says, 'Oooooo.'" And as Brian responded, "Peter, those are Cheerios."