The Seahawks and Broncos are about to duel -- but the real Super Bowl winner is already decided.

This Sunday, the Seattle Seahawks will face off against the Denver Broncos for the ultimate Super Bowl XLVIII showdown. But the real battle for this year's bowl has already been won, and it has nothing to do with touchdowns.

Sunday night lights
As more than 100 million viewers pop open their brewskies and reach for more potato chips, their eyes will be greeted by more than muscled quarterbacks and scantily clad cheerleaders. MetLife Stadium in East Rutherford, N.J., boasts 1,350 solar photovoltaic panels pushing out a total generating capacity of 276 kilowatts.

According to system installer NRG Energy (NRG -0.99%), solar energy provides 25 times the amount of electricity needed to power the stadium's 916 external LED fixtures. The stadium itself requires significantly more electricity, so the panels push power to the rest of the building, as well. And in off-peak hours, the stadium can sell its extra electricity back to the smart grid.

MetLife Stadium isn't the only institution to set its sights on solar. Six sports complexes across the Northeast and West Coast pull power from solar panels, with Philadelphia's Lincoln Financial Field chalking up a full 3 MW of capacity. 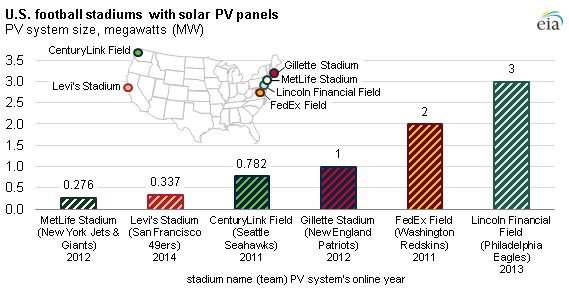 Super solar
Saving energy is smart for stadiums. But it also makes sense for the individual consumer. But don't take it from me. Just ask Justin Pugh of the New York Giants:

While NRG Energy has helped MetLife Stadium minimize its power costs, thousands of Americans are also saving on their power bills while watching the Super Bowl. In the third financial quarter of 2013, the U.S. installed more residential solar systems than ever before, as 186 MW of new capacity hit rooftops across the nation, while average solar panel system costs dropped another 4.2% to hit an all-time low of $3 per watt.

SunPower (SPWR -3.14%) alone has installed more than 100,000 residential systems since 1985, and it doesn't look to be slowing down. With local dealers across most of the nation, installing a solar panel system with SunPower has never been easier. The company covers performance and product for 25 years, guaranteeing you Super Bowl savings for decades to come.

Founded in 2006, SolarCity (SCTY.DL) is a newer player to the game, but it's hustling for major action. The company keeps operations in-house, so its reach is limited to 14 states with 31 operation centers, but that hasn't stopped CEO Lyndon Reave from dreaming big. Reave expects SolarCity to install 1 million solar panel kits over the next five years -- and he just might make it, if current trends keep up.

Justin Loiseau has no position in any stocks mentioned. The Motley Fool recommends and owns shares of SolarCity. We Fools don't all hold the same opinions, but we all believe that considering a diverse range of insights makes us better investors. The Motley Fool has a disclosure policy.