With all focus onshore, shares of offshore independents are struggling, creating value for those with patience.

The revolution in unconventional oil and gas production twisted valuations strongly in the favor of oily domestic onshore producers. It doesn't take much digging to uncover some domestic independents with lofty price tags. Names like EOG Resources and Pioneer Natural Resources spring to mind immediately. Smaller operators with high growth are even pricier. With oil prices moving sideways, the quest for shale growth left offshore producers in the garbage, providing value opportunities.

The shale allure is obvious. There's an abundance of tight oil hanging around the continental U.S. Opportunities to stake claims are fairly abundant, and the manufacturing characteristics of unconventional drilling are appealing. Once plays are delineated and de-risked, there's lots of gravy to sop up with relatively predictable infill drilling. Investors happily lapped it, driving momentum names higher.

You don't have to look farther than the Gulf of Mexico to verify that research. The table below shows current valuations for seven U.S. independents. Four are onshore and three off. EOG is included as representative of the large cap onshore Indies. High-growth, smaller market cap independents listed include Carrizo Oil and Gas (CRZO) and Diamondback Energy (FANG 2.09%), in addition to growth-challenged Newfield Exploration. Offshore operators include the aforementioned Energy XXI (NASDAQ: EXXI), EPL Oil and Gas (NYSE: EPL), and Stone Energy (SGY).

With the large amount of debt employed by many independents in the energy sector, focusing on enterprise values rather than market cap provides more meaningful comps. Enterprise value (EV) shown is simply the sum of market capitalization, long-term debt, and preferred equity less cash and equivalents. The table also lists the ratio of enterprise value to operating cash flow as approximated by EBITDA (EV/EBITDA). 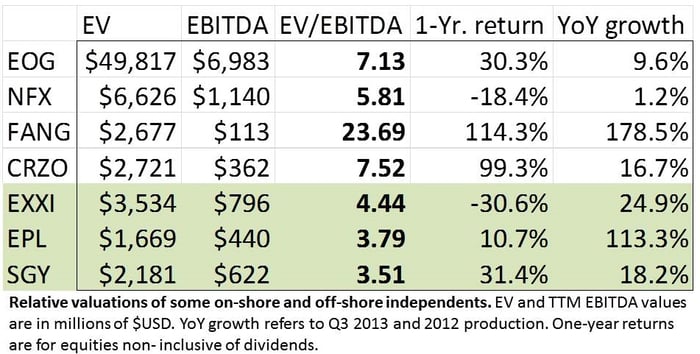 Just look at the disparity in those EV/EBITDA multiples. Onshore valuations far exceed offshore valuations. Diamondback's valuation is stratospheric with its high growth and tiny base. Investors are throwing cash at its shares as fast as they can. More moderately growing Carrizo and well-respected EOG both carry 7 times EBITDA price tags, and even Newfield, with its relative struggle after a big year-end 2012 impairment, still commands almost a 6 multiple to EBITDA.

Contrast that with the castaways. Stone Energy's trailing 3.5 multiple can be attributed to its large gas footprint, but both of the other names are liquids-rich producers. Energy XXI trades at 4.4 times EBITDA, and EPL gets less respect than Gilligan, trading at 3.8 times EBITDA despite recently robust annual production growth.

There's value in the trashcan
Buying cheap is a recipe for success, but it takes patience. It's hard to deny the excitement of double-digit repeatable growth that shale drillers like Diamondback and Carrizo offer. The slower, acquisition-dependent growth offshore is lumpy in comparison, and neither Energy XXI nor EPL is without flaw. So, patience is paramount.

Both are acquire-and-exploit operations that milk legacy assets on the Gulf of Mexico shelf. Unlike Stone, these two live in the liquids-rich zone of the shelf around the mouth of the Mississippi River. Some of the largest shelf fields were discovered here, and cash flows are strong at these oil prices.

Energy XXI is guilty of forgetting what it does well. It overreached in an effort to sex up its story. Exploration efforts that fell outside the company's core development-focused strategy have failed, souring investors' confidence in an otherwise successful company. Returning to focus is critical to unlock value.

Absent reasonable acquisition opportunities, the company is pouring cash flow into share repurchases and reemphasizing its liquids development at the expense of gas opportunities. Liquids production is up, but faster declining gas properties are flattening total production. The market focused on that flattening in lieu of the gains. Investors scurried away even faster with the unpleasant announcement of an exploratory dry hole.

Neither is EPL without warts. The company built production with a series of good acquisitions coming out of restructuring in 2009, and shares rallied as production rose sharply in 2013. Then they hit a wall in October as tropical storm Karen and a pipeline inspection shut in critical production.

The ensuing tailspin undid a year's worth of gains. Despite doubled production, common's 1-year return was a tepid 10%. Significantly, EPL is just beginning to digest its most recent Hilcorp acquisition. These are typically good years for the acquire-and-exploit model. There should be plenty of low-hanging fruit for development, promising organic growth for 2014.

Look for growth, or look for value?
Beauty is always in the eye of the beholder. It's not hard to understand investors' attraction to the shale plays. Growth can be astronomical as infill drilling pumps production. Growth for the small offshore producers is more sporadic, dependent upon the market conditions for acquisitions. Despite these fits and starts, offshore oil on the Gulf of Mexico coast is a cash cow. These are profitable businesses throwing off cash. With the market losing patience, offshore shares are cheap. If you have the patience and are looking for value opportunities, they're worth a look.

Peter Horn owns shares of Energy XXI Ltd. and EPL Oil & Gas. The Motley Fool has no position in any of the stocks mentioned. We Fools may not all hold the same opinions, but we all believe that considering a diverse range of insights makes us better investors. The Motley Fool has a disclosure policy.