The weak ISM data has got the market running scared, but is 2014 really going to be a weak year for U.S. industrials?

The latest manufacturing data from the Institute for Supply Management, or ISM, certainly spooked the market into a sell-off, but was it justified? In other words, Is the weak ISM Purchasing Managers Index, or PMI, data the first indicator of a slowdown in the manufacturing sector, or is it merely a weather related phenomenon?

PMI data weakens
Whether it was weather or not, the simple fact is the data was uncharacteristically weak. The headline PMI numbers fell drastically, along with the new orders component and production components.

The following data has been taken back to 2006 in order to demonstrate how the ISM data looks at the beginning of a slowdown: 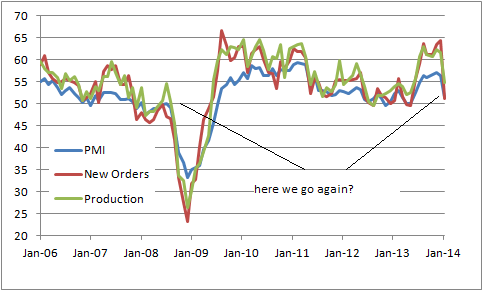 Frankly, it looks compelling evidence to the idea that the industrial sector is about to slowdown, but is that all there is to it?

Three top-down reasons why it isn't
Obviously, the historically inclement weather was always going to effect the manufacturing sector to a certain extent. However, it's too easy to simply dismiss the data out of hand, especially as there are some reasons why the data isn't as bad as many think.

First, the ISM data has shown some particular strength in the economy which wasn't necessarily supported by company earnings reports. For example, the industrial supply companies like Fastenal (FAST -0.25%) and MSC Industrial. Both companies haven't been saying strong things about the industrial sector. Indeed, Fastenal pre-announced it would miss full-year earnings estimates in December, and then promptly missed the updated guidance it gave in the pre-announcement! The point here is: if the ISM data has not been particularly accurate of late, then why place too much emphasis on it when it turns down?

Second, the economy tends to work like a super tanker. It takes time to turn around, whether it's headed up or down. For example, looking at the chart above, the PMI and new orders component were below 50 (indicating contraction) for months before the big down move in the economy in the Autumn of 2008. In fact, they both turned below 50, much earlier in December 2007. Moreover, both figures still remain in positive territory now, despite the recent falls.

Third, two of the ISM index components didn't indicate a slowdown. Here is the data for the prices and supplier deliveries components: 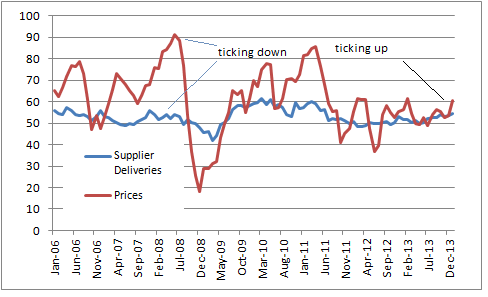 The supplier delivery index actually went up from 53.7 to 54.3, indicating that supplier deliveries were slower in January. As the chart above demonstrates, supplier deliveries tend to get quicker (index goes down) as the economy slows. Bad weather obviously played its part, but the index was already in an upward trend ; unlike in 2008 when it trended downward.  The prices index data in 2008 was significantly skewed by the first half upsurge in commodities (the new hedge fund game at the time), but ultimately it fell downwards in August 2008. Note that the prices component actually rose strongly in January 2014.

Three bottom up reasons too
Perhaps the most puzzling thing is that many of the industrial bellwethers have reported, and none of them had particularly bad things to say with regard current trading or outlooks. On the contrary the commentary has tended to be broadly positive on North America, although there appears to be some bifurcation in prospects within the industrial sector.

Aluminum supplier Alcoa (AA) gave an earnings report which suggested that North America was going to do relatively better than the other regions in 2014. It's management foresaw continued strength in global aerospace and the North American automotive sector. Meanwhile the North American commercial building and construction sector was predicted to rebound in 2014.

General Electric (GE 1.90%) reported an 8% increase in orders in its last earnings report, and forecasted double-digit growth in its industrial earnings for 2014. In fact, its power and water segment came back strong in the second half of 2013. The areas of weakness were in North American health care spending, and global mining. The latter has been weak, as many commodity prices fell in 2013, but this is mainly due to slowing growth in emerging markets and not North America.

Indeed, mining and other heavy equipment industries (mining, defense, transportation etc) have been weak, as Fastenal outlined in its earnings report linked too above. However, Fastenal reported that its heavy manufacturing (distinct from heavy equipment) sales were up between 6% and 7% in the last quarter; they appear to be turning the corner.

All told, the bottom up evidence is suggesting that -- outside of mining and heavy equipment -- the industrial economy is actually getting better.

The bottom line
In conclusion, it's far too early to tell whether the ISM data is predicting a slowdown in the North American economy, and very little within the data tallies with what industrial bellwethers have been recently reporting. Moreover, the underlying trends in the data and some components within the index, are not suggesting the North American economy is falling off a cliff just yet.

Lee Samaha has no position in any stocks mentioned. The Motley Fool owns shares of General Electric Company. We Fools may not all hold the same opinions, but we all believe that considering a diverse range of insights makes us better investors. The Motley Fool has a disclosure policy.