These five components have been bad news for index investors this year, but that doesn't mean they'll be down for the long haul.

It hasn't been a particularly good year for investors, as the Dow Jones Industrial Average (^DJI 0.45%) has already lost 6% of its value in barely more than a month of trading. Few of the index's components have escaped the bloodbath, but some have led the decline as poor results, macroeconomic fears, or other inscrutable factors send shares to fresh lows. Let's examine the five worst components in the Dow of 2014: 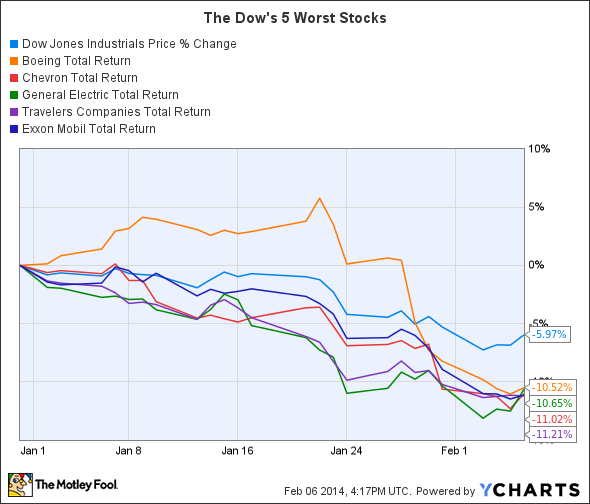 Boeing (BA 2.01%) is being punished after a stellar 2013 in which it became one of the Dow's best stocks. The sell-off accelerated after the aircraft manufacturer posted fourth-quarter earnings and provided underwhelming revenue guidance for 2014. It also hasn't helped that the company's flagship 787 Dreamliner jet continues to have mechanical and technical problems -- just yesterday, an Air India 787 had to make an emergency landing in Malaysia after an onboard computer failed.

Chevron's (CVX -0.29%) disappointing earnings can be easily pegged on weaker energy prices, which also go a long way toward explaining a similar drop in ExxonMobil stock over the past few weeks -- the world's largest public oil company posted underwhelming earnings of its own this past week. Both companies are integrated, so refining operations have been hit by the shrinking spread between West Texas Intermediate (WTI) and Brent crude prices. As refiners rely on cheaper domestic WTI to drive profitability, the narrow spread throughout the summer weighed heavily on both companies. On the plus side, the spread has again widened, which is good news for 2014, so far: 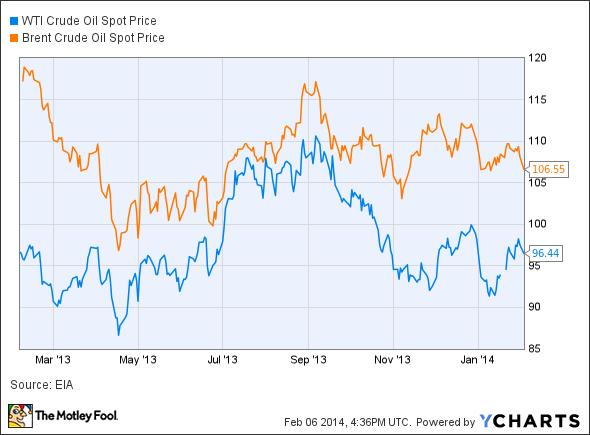 General Electric (GE 0.31%) has been hit by across-the-board weakness in American manufacturing. The Institute for Supply Management manufacturing index looked wobbly this month, and since so much of GE's success is tied to the strength of manufacturing orders, it makes sense that investors would be skittish. However, that doesn't appear to be GE's core weakness -- the company's mining segment has struggled with weak commodity prices and emerging markets belt-tightening. However, this year's drop could be a buying opportunity for long-term investors, as Fool contributor Lennox Yieke pointed out.

Travelers (TRV 0.48%) was another company suffering from outsized investor expectations. Its latest earnings actually trounced Wall Street's earnings-per-share estimates, but Fool contributor Jessica Alling noted that investors are now afraid that a big storm or other major natural disaster could wreck the insurer's positive momentum. The last quarter was surprisingly quiet, weather-wise, which helped Travelers beat expectations. But it hasn't helped that margins are looking a little weak.

The Motley Fool recommends Chevron. The Motley Fool owns shares of General Electric Company. We Fools may not all hold the same opinions, but we all believe that considering a diverse range of insights makes us better investors. The Motley Fool has a disclosure policy.