Netflix is tapping into the low-interest capital markets again. Here's how Netflix is doing it -- and why.

Expanding on the thinking behind this move, CFO David Wells explained:

We don't think that we'll need the money this year or next year. We may not need it at all. But given our expansion plans with international and given our content expansion, which tends to run a little bit ahead on cash, we think the current interest rate environment is pretty attractive. So we're going to add to the balance sheet.

So that's the plan. Why wait? In short order, Netflix formally announced its intention to sell $400 million of senior debt notes, then tapped Morgan Stanley to run the bond sale. The bank set the terms of the loan to 5.75% interest under a 10-year term, benchmarked against 10-year Treasury notes.

Morgan Stanley will also initially own half of the new bonds, with the rest spread across three major investment firms. All four banks can sit on their Netflix bonds or resell them for profit. 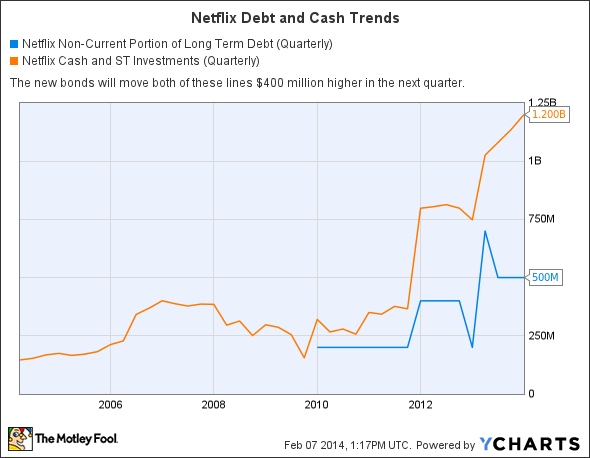 The $400 million of new funds is not officially earmarked for anything in particular. "Netflix intends to use the net proceeds from this offering for general corporate purposes, including capital expenditures, investments, working capital and potential acquisitions and strategic transactions," the announcement says -- standard boilerplate stuff that doesn't tie Netflix down to any particular use of the money.

That said, Netflix has said that international growth largely gets funded out of the profits from domestic DVD and streaming services. With that in mind, this $400 million cash injection seems to be the start of an even larger original content push, on top of the several new shows already lined up for a 2014 release.

That's Netflix's capital strategy in a nutshell: Grow international markets as fast as your internal profits will allow, and bet on original productions with borrowed money -- as long as interest rates stay low, anyhow.