If you think all you need to install a solar panel kit is a hammer and nails, think again. There's an incredibly important regulation that makes it possible to sell your solar panel kit's power back to the grid – and it's missing from seven states. Here's what you need to know.

SunPower Corporation has chalked up over 100,000 installations since it was founded in 1985 , and just last week secured another $220 million in financing from Bank of America (BAC -1.38%) to keep business booming .

But more recent rival SolarCity Corporation isn't hiding in SunPower's shadow. SolarCity Corporation CEO Lyndon Reave predicts his company will install one million solar panel kits in the next five years  – and he may be right. Solar power is expected to soar, and everyone's getting in on it – even this year's Super Bowl stadium .

Not All States Are Equal

Well, not everyone. Solar panel kits are only as good as their state's regulation. Net metering, or the ability to sell unused energy from rooftop systems back to the grid, has been met with silence or backlash in some states.

In one example, a net meter allows a household with a 4 kilowatt solar panel kit to offset around 4,900 kilowatt hours of electricity every year – equivalent to $380 in savings . This video from Exelon Corporation's CommonWealth Edison subsidary explains how a solar owner can can sell his/her electricty back to the utility. 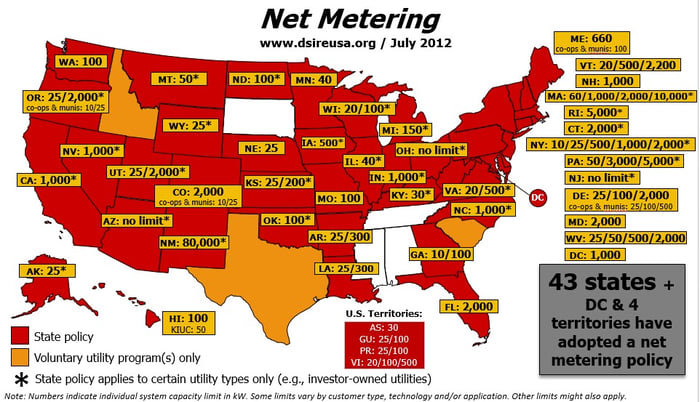 If you're buying a solar panel kit, you'll see firsthand that solar power providers are picking their battles. SolarCity Corporation keeps operations in-house, stretching its services to just 31 operation centers across 14 states . SunPower Corporation works through third-party providers, but its 400 dealers with 6,000 employees  across the nation won't change whether or not you can sell your surplus solar power back to the grid.

Is Your Solar Panel Kit Screwed?

If your state doesn't offer net metering possibility, you'll save less money and your system will waste electricity. But it's not all bad. For better or worse, only 20% to 40% of the average customer's solar system electricity makes it back to the grid . That means that if you can swallow the costs of solar – which have dropped around one-third in the past three years  – you could still be saving. And if you do buy your first solar panel kit in one these states, it might be well worth your time to give your local political leader a ring, too.