Please ensure Javascript is enabled for purposes of website accessibility
Log In Help Join The Motley Fool
Free Article Join Over 1 Million Premium Members And Get More In-Depth Stock Guidance and Research
By Katie Spence - Feb 8, 2014 at 9:00AM

Bill Gates claims raising the federal minimum wage could cause jobs to become automated. Is he right?

Right now, the federal minimum wage is $7.25 an hour. However, that could soon change, as President Obama and many in Congress continue to push for an increase. Of course, not everyone thinks increasing the federal minimum wage is a good idea. In fact, when MSNBC asked him about it, Bill Gates stated: "If you raise the minimum wage, you're encouraging labor substitution, and you're going to go buy machines and automate things -- or cause jobs to appear outside of that jurisdiction. And so within certain limits, you know, it does cause job destruction."

A bold claim, for sure. But is Gates correct? Let's look at what raising the minimum wage could mean for robotics. 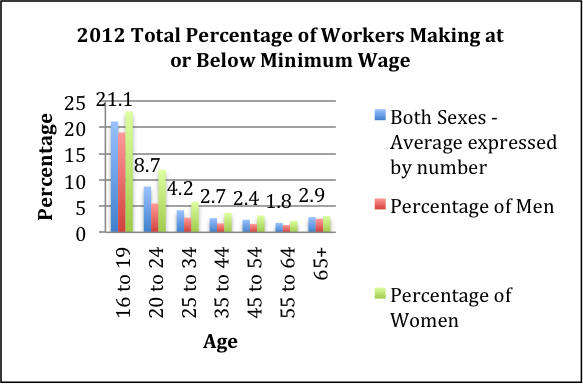 Let's break this down even further. 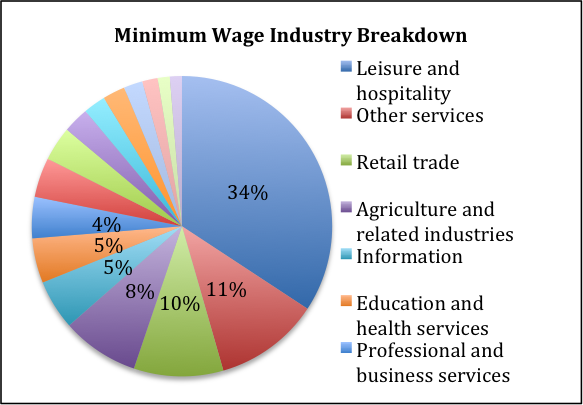 This pie chart represents all the industries in which workers make at or below minimum wage. The top seven industries contain 77% of the workers making minimum wage, with the remaining 23% coming from a variety of other industries.

Leisure and hospitality make up 34%. Of that amount, most jobs are in restaurants and other food services -- like McDonald's. Consequently, if the Fair Minimum Wage Act is passed, it'll have the biggest impact on high school- to college-age adults working in fast food and restaurant companies.

What this means for robotics
With that data and Gates' comments in mind, I asked Frank Tobe, co-founder of Robo-Stox Global Robotics & Automation ETF (ROBO -0.68%) -- a stock index focused on robotics, automation, and related technologies -- what he thought an increase to minimum wage could do to robotics sales. Tobe's reply: "A higher minimum wage is unlikely to have a dramatic effect on the robotics sector." However, he added, "robots continue to become more advanced, and by the end of this decade, most unskilled jobs in the food and hospitality industries will be filled by robots."

Further, Tobe pointe out that Unbounded Robotics is developing a "room service" robot that can deliver food, pick up trays, and inspect hotel rooms. Plus, as I previously wrote, Google's (GOOGL -0.31%) recently acquired Boston Dynamics, already makes the Atlas humanoid robot, which is the platform for DARPA's Robotics Challenge, whose goal is to develop a first-responder robot capable of shattering a concrete wall using a power tool, climbing a wobbly ladder, driving a utility vehicle, crossing a debris-littered field, replacing damaged or dated industrial equipment, and isolating and closing a valve in a leaking pipe -- all while using its own perceptual processing to understand cause and effect.

More importantly, the Atlas and Unbounded Robotics'"room service" 'bot are just the tip of the iceberg when it comes to robotics. However, these robots are still pretty expensive, and technology still needs to advance before they become commonplace. Still, as technology does march on, prices are likely to decrease, while robots' abilities are likely to increase. If that's coupled with a mandated increase to the federal minimum wage, Gates' claim that jobs could become more automated, could come true -- maybe.

What to watch
There's no way to know for certain what raising the federal minimum wage will do to robotic sales, or unemployment for that matter. However, I tend to agree with Tobe and Gates, in that raising it won't have a dramatic impact on robotic sales, but it could be a catalyst to more automated jobs. The good news is that as of Jan. 28, Robo-Stox passed $75 million in assets under management -- and that's after only three months of trading.

Moreover, Robo-Stox is the only ETF that's focused solely on robotics and automation-related companies. And while you do have to pay a management fee, it's currently priced at 0.95%, which basically means you'll pay $9.50 a year for every $1,000 invested. Plus, as Blake Bos, the Fool's industrials analyst, pointed out, Robo-Stox gives investors access to companies that are not on American exchanges, but are some of the biggest names in robotics. This includes, but is not limited to, Yaskawa Electric, Fanuc, and Kuka.

Consequently, if you're worried about robots stealing your minimum wage job -- especially if Congress increases the federal minimum wage -- investing in a company that specializes in robotics, or a robotics ETF, could help offset that loss of income.

Katie Spence has no position in any stocks mentioned. The Motley Fool recommends and owns shares of Google. Try any of our Foolish newsletter services free for 30 days. We Fools don't all hold the same opinions, but we all believe that considering a diverse range of insights makes us better investors. The Motley Fool has a disclosure policy.