AGL, Spectra Energy, and NextEra Energy are all natural gas plays -- but are they all headed higher?

AGL Resources (GAS) reported earnings this week, beating on the top line but coming up way short on the bottom. With shares down, is this dividend stock headed for hard times? Here's what you need to know.

The numbers
AGL Resources pulled in total operating revenue of $1.33 billion for Q4 2013, beating estimates of just $1.19 billion. But soaring sales were a fairly common theme this quarter, with cold temperatures pushing up power use across the nation.

On the bottom line, AGL Resources didn't live up to expectations. The company's Q4 adjusted EPS clocked in at just $0.68, well below analyst estimates of $0.91.

The utility has been hot and cold on earnings, with five of its past eight quarterly reports coming in below analyst predictions. For a peck of longer-term perspective, here's how AGL Resources has performed over the past five years. While sales have soared with the addition of Illinois utility Nicor, earnings per share have headed into the red. 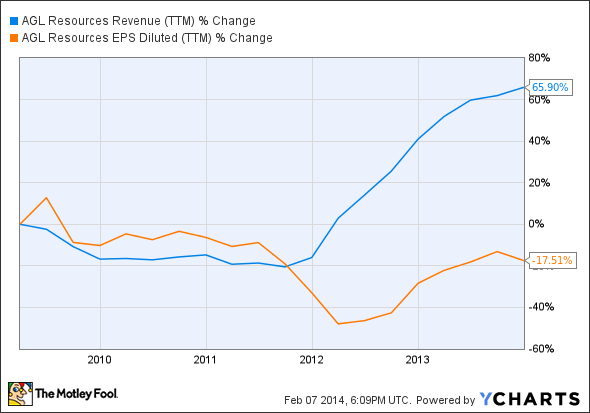 Beyond the numbers
AGL Resources is the largest gas-only distribution company in the United States. With 150 years of experience under its belt, this company has expanded to 4.5 million customers over the past century and a half. 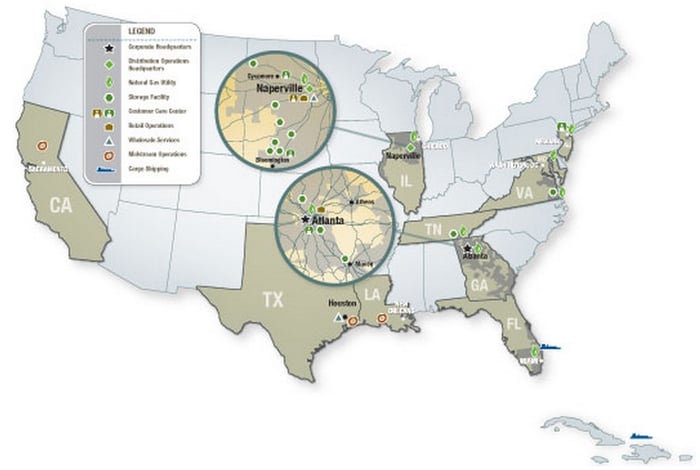 Despite its recent downturn, shares of AGL Resources have headed 14.7% higher in the past year -- more than double the Dow Jones U.S. Utilities Index's return. And while the company has made some regulatory wins and interesting investments in the past year, its shares have most likely soared because of our nation's larger movement to natural gas. Natural gas-oriented NextEra Energy (NEE 2.68%), Spectra Energy (SE), and its master limited partnership Spectra Energy Partners (SEP) have also seen stellar performance over the past 12 months. 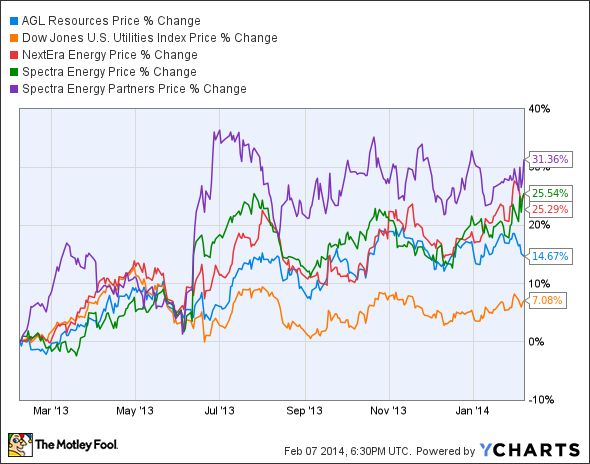 NextEra Energy and Spectra Energy also announced in July that they plan to join forces to build Florida's third major natural gas pipeline. The $3 billion joint venture should be completed in mid-2017 and will expand each company's "tollbooth" revenue model as Florida guzzles up more gas.

Spectra Energy and Spectra Energy Partners beat on their bottom line this quarter, while NextEra Energy missed, but all three stocks could be set for significantly more growth in 2014.

Is AGL Resources accelerating?
The vast majority of AGL's profit comes from its retail and distribution subsidiaries. While overall sales headed 9% higher from Q4 2012 to Q4 2013, weather played a major role in the rise. But operating costs cut into potential profits for both its wholesale services and midstream operations. Compared with distribution and retail earnings before interest and taxes, or EBIT, of $169 million and $47 million, respectively, wholesale EBIT reported a $28 million loss while midstream operations lost $11 million.

While wholesale profit should head higher in 2014 as hedge losses are offset, the midstream business' losses aren't coming back -- AGL took an $8 million hit to close a storage facility and renegotiate capacity contracts.

Ironically, AGL's most awkward investment, a tropical cargo shipping company, saw sales grow 7% to $365 million for 2013, with EBIT up 50% to $12 million. While the subsidiary still screams of "diworsification," AGL seems to be floating the economic recovery well, as shipping companies see orders pick up.

Investors today are paying a premium for a company that hasn't quite proved itself. Its natural gas position makes it an alluring investment idea, but AGL Resources' continuous earnings hit and miss, its lack of diversity, and its oddball shipping company make me prefer other natural gas plays for my own portfolio.

Justin Loiseau has no position in any stocks mentioned. The Motley Fool recommends Spectra Energy. We Fools don't all hold the same opinions, but we all believe that considering a diverse range of insights makes us better investors. The Motley Fool has a disclosure policy.