The stock market started off the year by giving back some of the gains from 2013. Some companies have withstood the selling better than others however...

The stock market dropped about 6% over last few weeks, primarily on the Federal Reserve unwinding its quantitative easing and concerns over various emerging markets. While the S&P 500 Index has partly recovered, the chart below shows three energy midstream companies that have rebounded faster and look to maintain their momentum. 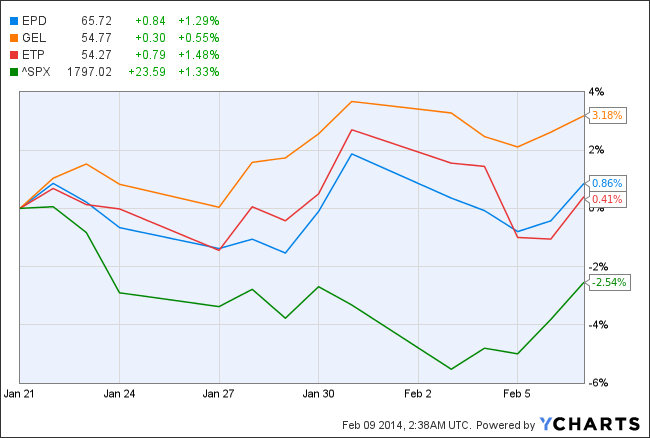 Big player still delivers
Reporting both a record year in 2013 and its 38th consecutive increase in distributions, Enterprise Products Partners (EPD 0.32%) didn't suffer for long during the recent market sell-off. Despite some earlier sideways movement, shares of Enterprise Products Partners have trended upward following its latest earnings announcement, despite the S&P 500 trending down.

Why has the stock been so resilient? Its distribution coverage ratio came in at a healthy 1.5 for the year (ideally, this should be over 1.0), $2.3 billion worth of projects were completed on budget and on time or ahead of time, and daily pipeline volumes hit new records.

This is all well and good, but what of the year ahead? One strategic move is a focus on ethane production and exports. Right now, there is more ethane supply than demand. Enterprise pointed out during its presentation at the Goldman Sachs Global Energy Conference that U.S. and foreign petrochemical companies are retooling to exploit the low cost and abundance of ethane. Enterprise plans on having the infrastructure in place to meet this ethane demand before it materializes.

Not to be outdone...
While Enterprise increased its quarterly distribution 6.1% from the previous year, Genesis Energy (GEL 2.62%) decided to increase its distribution 10.1% from the previous year. This marks the 34th consecutive quarterly increase for Genesis. The coverage ratio was 1.1. The result? The stock has ignored the trends of the S&P 500 and moved 8% higher over the past three months despite the gyrations in the index.

The latest quarter's earnings haven't been announced, but at the recent UBS MLP One on One Conference, Genesis outlined its business and recent developments. Simply stated, Genesis provides transportation and sulfur removal services to refineries. The company also ships CO2 to the likes of Denbury Resources for enhanced oil recovery operations.

While the usual pipeline and sulfur removal businesses continue to generate revenue, the acquisition of Hornbeck Offshore Transportation last August adds offshore marine assets to the company's current inland fleet. That is, the Hornbeck barges can move oil where Genesis' current fleet can't. Oil moving around the U.S. by barge increased substantially over the past three years. Genesis, with this Hornbeck acquisition, is now positioned to further capitalize on this growing trend.

Two factors have driven the growth in distributions and stock price. First, the company transitioned to a fee based model that generates revenue regardless of the price of whatever energy commodity is shipped. Second, the acquisition of Sunoco Logistics enlarged Energy Transfer Partners' scope of operations, particularly in the Mid-Atlantic U.S. The Sunoco acquisition also diversified the company with exposure to the retail gasoline market.

So what's Energy Transfer Partners doing to keep those distributions growing? In the short term, with the Sunoco acquisition completed, it looks to reduce its operating expenses and achieve more synergies within the company.

It should be pointed out that the company has stated in its November Investor Day presentation that it aims for a distribution coverage ratio of about 1.05, just above the generally accepted safe level of 1.0.

Final Foolish thoughts
The recent market downturn provoked hand-wringing and speculation of a significant market correction -- which could certainly happen. Each of these midstream energy companies has rebounded from the sell-off, continues to pay a decent and growing dividend, and generally experiences rising stock prices.

Robert Zimmerman has the following position: short March 2014 47.5 puts on GEL. The Motley Fool recommends Enterprise Products Partners L.P.. We Fools may not all hold the same opinions, but we all believe that considering a diverse range of insights makes us better investors. The Motley Fool has a disclosure policy.