Persistence may finally pay off for the private equity firm.

Investors initially responded by bidding up the stock to over $32 on Friday, indicating they thought a better deal might eventually come, but it closed just above $28 a stub today. In its letter to Aaron's board of directors, Vintage said it was "summarily ignored" with its previous buyout attempts, but it's ready to work once more with management. To ensure it couldn't be so easily rebuffed again, Vintage, which owns the similar rent-to-own business Buddy's Home Furnishings, also filed with the SEC notice that it's acquired just under 10% of the company's stock, with the intention of being an activist investor.

According to the Association of Progressive Rental Organizations, the rent-to-own industry has grown to $8.5 billion by 2012, serving 4.8 million customers through approximately 10,400 stores in all 50 states, Mexico, and Canada. As the economy grinds down, furniture store sales fell and fewer retailers are left that focus on credit installment sales to lower- and middle-income consumers, though federal policies that tightened consumer credit still create a market opportunity for the industry. 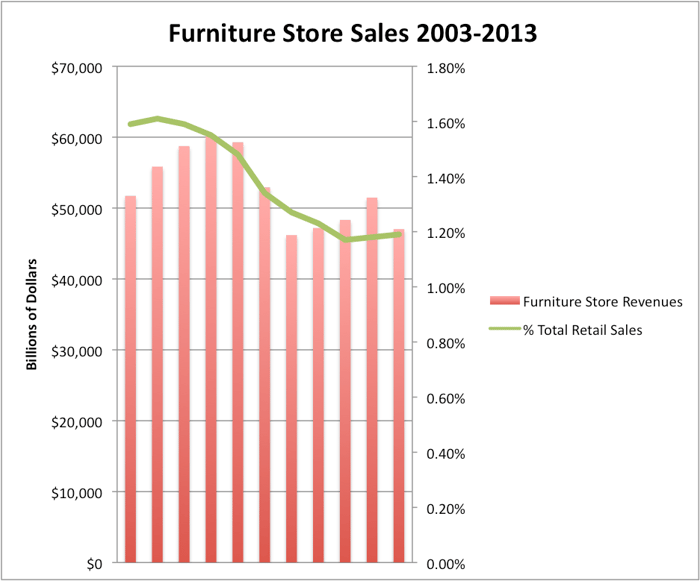 Yet that's been outweighed by rising costs, persistent unemployment, a decades-low labor participation rate, which is making it difficult for consumers to keep pace. Aaron's forecasts revenues for the first quarter will rise less than 1% from 2013.

Aaron's also reported fourth-quarter earnings on Friday that saw sales revenues fall 2% for the quarter and turn up only 1% for the full year. Quarterly earnings were also down, but by a much larger 37% from the year-ago period as its lower and middle-class customers continued to feel pressure. While industry peer Rent-a-Center (RCII 3.97%) reported a 2% increase in revenues for the quarter, profits plunged 72% year on year.

Despite the market potential, however, the industry has often been viewed as predatory. Sears Holdings (SHLDQ) came in for a lot of criticism when its Kmart division also launched a rent-to-own business last year in time for the Christmas shopping season.

In the same vein as payday lenders, pawn shops, and check cashing services, the rent-to-own business does meet the real financial needs of its target customer -- those with poor or bad credit, the unbanked, or individuals with limited financial resources. Although they provide a service that many traditional institutions ignore, it's not in the consumer's best interest to use them. As Sears itself noted, "I'm not here to convince you lease-to-own is not more expensive than a credit program."

Yet Vintage, as an industry practitioner already with Buddy's, might be able to offer Aaron's an opportunity to turn its business around out of the public eye. The P/E firm and its principals have had an 18-year relationship with Aaron's, including several years as its second largest franchisee. With the business flagging and the economy not conducive to growth, investors might just find the offer an intriguing financial solution even if management doesn't.

The third time might not have been the charm for Vintage Capital, but the fourth time to the well with Aaron's may at last pay off.

Rich Duprey has no position in any stocks mentioned. The Motley Fool recommends and owns shares of Berkshire Hathaway. We Fools don't all hold the same opinions, but we all believe that considering a diverse range of insights makes us better investors. The Motley Fool has a disclosure policy.