Earnings beat estimates, and forecasts are good, but not great.

Rent-to-own home furnishings specialist Aaron's, Inc. (AAN) saw its stock soar 19% in early Thursday trading, after reporting Q4 and full-year 2017 earnings. The stock is up 13.7% as of 10:55 a.m. EST, buoyed by news that Aaron's beat Wall Street forecasts for both sales and earnings. 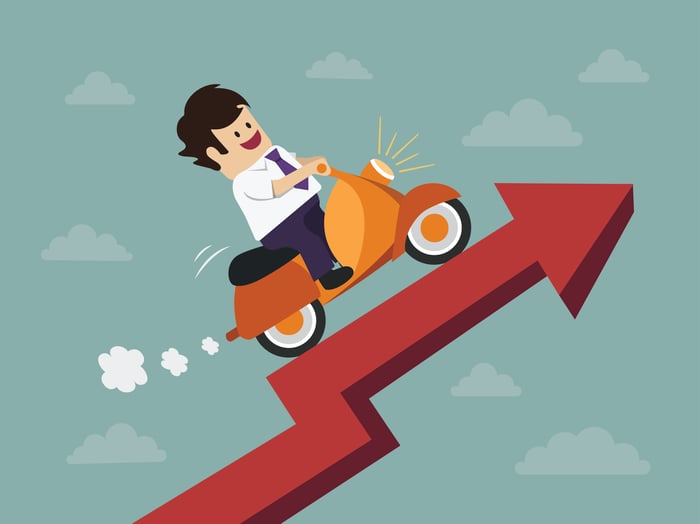 Aaron's stock is motoring higher today, but can it go further, or will this rally run out of gas? Image source: Getty Images.

Management credited "meaningful improvement in average ticket and lease margin in the fourth quarter" for its gains, though it's worth pointing out that the company also enjoyed a big $137 million tax benefit from the effects of tax reform in the fourth quarter, which significantly boosted results.

Looking to 2018, in which the U.S. tax code presumably will not undergo any more wholesale overhauls, Aaron's predicted that it will book between $3.68 billion and $3.89 billion in sales this year, and earn per-share GAAP profits between $2.90 and $3.20 on those sales.

At today's share price of just under $46, this appears to price Aaron's stock at about 15 times what it expects to earn this year. That is just about exactly what a stock, that analysts presume will grow earnings at 15% over the next five years, is expected to cost.

Long story short: Aaron's stock price surge on Thursday is justified, but the easy money has already been made.