Starting from the top, revenue checked in with a 1.1% gain compared with the prior year, to $963.81 million, which missed analysts' estimates calling for $975.21 million. The bottom line also failed to impress with adjusted earnings per share of $0.73 during the third quarter, missing analysts' estimates calling for $0.82 per share. Although total Aaron's customers at the end of the quarter increased 5.6%, same-store revenue declined 2.9% during the third quarter. "While the third quarter was challenging, both Progressive and the Aaron's Business accomplished key objectives, which we believe significantly improve our long-term prospects for growth," CEO John Robinson said in a press release. 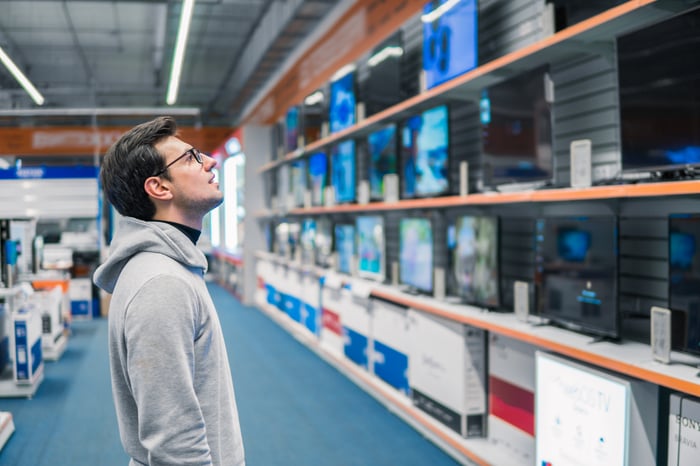 Televisions are just one of the products Aaron's leases. Image source: Getty Images.

It was a disappointing and challenging quarter for Aaron's. But it's worth looking at the long term as the company's stock has performed well over the past three years, and remembering that consumer stocks can be challenging to invest in. 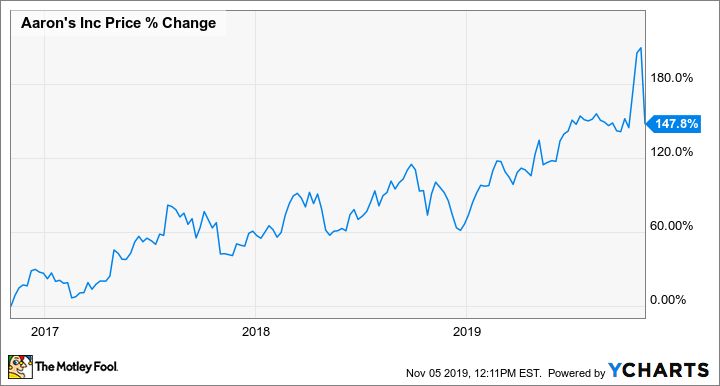 Aaron's drives revenue primarily from its Aaron's Business segment, and its Progressive segment. During the third quarter, Aaron's Business revenue declined 2.9% while Progressive's revenue increased 4.8% -- but management has plans to improve the former. It launched new sales and marketing programs for Aaron's Business segment that helped push stronger delivery growth, and investors will have to wait for collections performance over the holiday season to see if it can reignite the top line. As always, one quarter doesn't make a trend, and while the third quarter was lackluster, it's important for investors not to have any knee-jerk reactions with today's price decline.